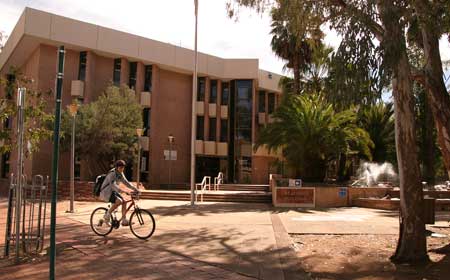 An Alice Springs Town Councillor and CLP supporter has hit out at government-sanctioned practices which he says disadvantage local businesses tendering for public works.

Steve Brown says the process gives local firms a 10% – sometimes higher – edge over outside ones.

But some local firms winning tenders routinely subcontract work and supply of materials to outside companies, as Asbuild is currently doing with the electrical works on the new police station.

Cr Brown is an electrical contractor but did not tender for the work in the Greatorex Building, part of which is being refurbished as a police station (pictured).

Jim Niland, of the Alice Springs based company Amped Electrical NT, missed out on work which went to the national company Nilsen (NT) Pty Ltd, in the NT operating out of Darwin, although his price was competitive.

Mr Niland claims that other building contractors, local and interstate, used his price and he was lead to believe that when compared to Nilsens his price was better.

However, Asbuild construction manager and director Paul Graham says Mr Niland’s firm “is under resourced for the size of the project.

“He was 20% more expensive and his CAL [Contractor Accreditation Ltd] was not approved at time of tender”.

Mr Niland rejected both claims: He said his CAL application was submitted at the time of tender and was approved well before the tender was awarded.

He says he made all building contractors aware of this. He had sourced three local qualified electricians, some with young families not unlike his own situation, and was willing to employ two new apprentices on top of the three current employees in case he won the tender.

Mr Niland himself is 33 years old, born and bred in Alice Springs.

He says he has worked hard to survive the economic slump in the town, recently having to reduce his workforce from five to three.

“It is hard at the moment, the town has been quiet and something big like this comes up. It is disappointing that we missed out, especially since we were the only genuine local electrical contractor willing to price it.

“All of our subcontractors are local with families and we used only local suppliers.  It would have been a good job to get and it would have helped us immensely. Now we will have to wait and hopefully the new year brings something.”

Mr Niland is the very kind of person the NT government is tirelessly claiming to be supporting.

In an earlier response to the Alice Springs News Online, when we queried why materials had not been bought in Alice Springs, Mr Graham said: “Some specialised items / equipment … are not available in Alice and on occasion not available within Australia.

“I am unable to make much comment as I’ve signed a confidentiality agreement with the Government surrounding this contract.”

We nevertheless asked for details and he replied: “Sensitive equipment which would be found in a police station.”

The need for the police station expansion has lately been questioned, in line with government claims that crime is dropping.

And now that the tender is concluded, the confidentiality agreement has clearly no purpose other than concealing from the public the way its money is being spent by the government.

The police did not respond to questions from the Alice Springs News Online.

Richard Sankey, the chairman of the tender assessment team for the project, says the decision had been made on the grounds of “best value for money” although some quotes were lower: At $7m the Asbuild tender was $1m below the project’s estimate.

The edge for “local” firms had been applied.

[There are further costs which will push the total to $9m, the figure used in earlier government releases.]

Mr Sankey says there were nine submissions. Two were inadmissible given the scope of the project.

Cr Brown says the system supporting locals should ensure that those contractors using the “local” advantage to win contracts “are subject to a monitored expectation that they will make every effort, backed up by documentation, to pass on a similar advantage to local subcontractors and suppliers.

“For instance the electrical work on the police station has gone to a Darwin company who are reported to be supplying the contract out of Darwin, bypassing the local wholesalers.

“These have made a large commitment to being local by investing heavily in local warehousing, maintained by local employees.

“In short the Territory Government must ensure that the local advantage isn’t simply being pocketed by the head contractor or if you like ‘project administrator’.

“After all 90% of all necessary infrastructure, staffing and supply of any contract is provided by the specialist subcontract and supply firms, not the main contractor,” says Cr Brown.

“From the main contractor’s point of view it’s simple enough, if they don’t want to make the effort to use locals, don’t apply for the advantage.

“The government must make sure that is how it works, otherwise we are piddling good tax payer dollars in the pockets of a very few, which frankly adds up to very little local advantage.”

Mr Graham says the project will employ 100 people and be of major benefit to the Alice Springs economy.

LETTER TO THE EDITOR UPDATE, 7 January 2021, 10.42am: We are deeply disappointed by the decision not to grant bail to Julian Assange, which is an...
Read more
Issue 40

By ERWIN CHLANDA A year ago Alice Springs was sweltering in an eight hour “system black” electricity drop-out prompting the NT Government to sack the...
Read more