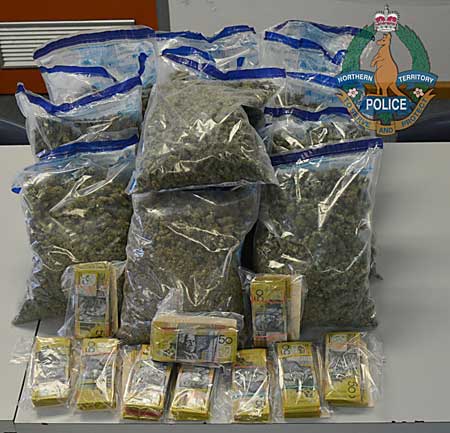 Police have arrested two men for drug offences following the search of a vehicle which had been transported from Adelaide to Alice Springs.

Detective Senior Sergeant Peter Malley from the Tactical Investigation Squad said police received information of a vehicle believed to be used to transport drugs which had arrived in Alice Springs yesterday.

“Police conducted a search of the vehicle and located 9.9 kilograms of cannabis hidden under the utility tray. Two men aged 29 and 33 were arrested  for questioning.

“A short time later a search warrant was executed at a local hotel that the two men had been utilising.

“During the search Police located $98,050 cash which was also seized.”

No charges have been laid at this stage.

“We will continue to target those who profit from this illicit activity”, said Det Malley.

“If you plan on transporting drugs into the Northern Territory, you can plan on staying here a lot longer than you expected”.

Drenching rainfall from a significant cloud band developing over Central Australia is forecast from Sunday. Yulara could see up to 15 to 20mm from persistent...
Read more
Issue 39

Pat Turner AM: Australian Government is kicking the can down the road on the Voice to Parliament

For Australia to have a strong human rights leg to stand on when it comes to engaging with other countries on their records –...
Read more
Issue 39