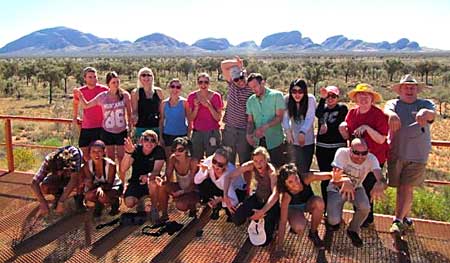 Tiger was bringing tourists from Sydney and Melbourne to Alice Springs for $110 in three hours. Compare that with an 18 hour bus trip from Adelaide for twice that cost. And it’s now much cheaper to fly to The Rock than to Alice, for example $280 from Sydney, bypassing Alice Springs.

That’s the situation faced by the Alice-based The Rock Tour, yet the plucky company is battling a 25% downturn of its business with packages getting travellers to Alice by road from Cairns, Darwin and Adelaide, and by giving them service that has just earned them a string of industry awards.

The Virgin flights between Darwin and Alice next year are still an unknown quantity so far as prices and schedules are concerned, says company’s sales manager Liam Doherty.

It’s a battle to sustain the viability of the company’s assets in Alice – Toddy’s Backpackers in Gap Road and The Rock Bar opposite the council chambers – and to guarantee the future of their 50 employees, serving 1000 guests a month.

Since the shut-down of Annie’s and Elke’s, Toddy’s is the town’s biggest hostel for budget travellers, says Mr Doherty.

The firm’s single “product” offered, costing $330, starts with a night at Toddy’s, followed by a bus trip to Ayers Rock (Uluru), the Olgas (Kata Tjuta) and King’s Canyon (Watarrka).

The first of the two nights is spent in a bush camp, not far from Curtin Springs, and the second one at the Ayers Rock Resort campground, where there are showers available from the morning of the second day.

But it’s the bush camp that customers rave about: cooking on a campfire, and sleeping in the swag under the magnificent starry sky.

The purposes for which us locals, when we go bush, take a shovel for a walk, are catered for by an enclosed drop pit dunny.

The clientele is typically aged 18 to 35. They are from Germany, Holland, France, Taiwan, Hong Kong, Japan and England – and Australia, of course.

“Asians love the outback,” says Mr Doherty. Some are on working holiday visas, or on three month tourist visas. They may be studying English in Australia, or have saved money doing farm work.

Mr Doherty says the The Rock Tour is chuffed at the awards it received last week: “On Thursday we won The Best Tour in the NT for the seventh time in eight years at the Golden Backpacker Awards in Sydney.

“Also on that night we won, for the first time, The Best Tour in Australia, at the same Awards ceremony.

For the Golden Backpacker Awards, during a 10-week national campaign in TNT Magazine and online, backpackers vote for their favourite hostel, tour and tour / activity in every state and territory in Australia and across the Tasman.

The awards are monitored by an independent panel of judges. In 2012 almost 80,000 votes were received. In 2014, almost 40 companies were recognised for their outstanding customer service in both state and national categories.

The Adventure Travel Awards are Australia’s and New Zealand’s newest and best tourism awards for the youth / adventure tourism industry.