The light work of many hands 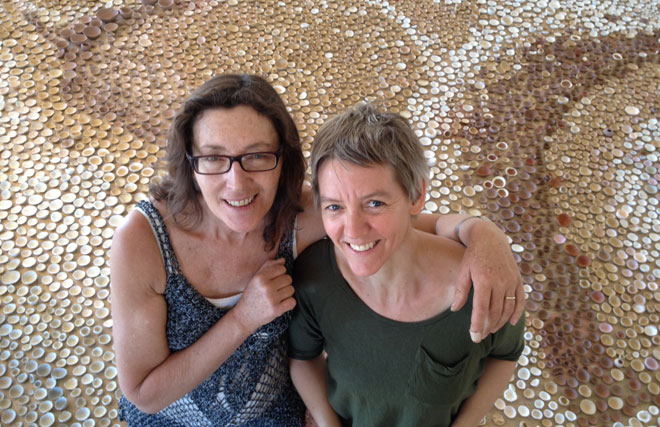 Not pipi shells on some distant beach but thousands of tiny pinch pots made by dozens of people from across this desert community.

Ceramicists Suzi Lyon and Mel Robson embarked on the project a year ago after coming across a small group of pinch pots as they cleaned up in the studio at Charles Darwin University where they both teach.

It started with an aesthetic idea – a vision of the loveliness of pinch pots, the simplest of ceramic forms, en masse. It became an idea about community. To get the thousands needed to fill the gallery, they had to involve other people. 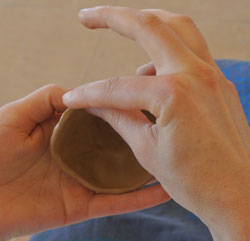 When they spoke about Touch last Saturday it was this experience they enthused about: getting out of the studio, going into public and community spaces with a bag of clay, inviting people to join in, seeing their pleasure in this simple act of making and experiencing the way in which it opened up conversations.

In our busy lives, we don’t necessarily sit down and talk to people, especially people whom we don’t know. But, said Robson, when people do something with their hands, it relaxes the space between them and conversations flow. Now when she looks at the pots, more than anything she sees in them the stories exchanged over the course of the project.

Although most of the tiny pots share a similar shallow cupped form, from being shaped in the palm of the hand, this “memory of community” is seen in their difference, as slight as it may be. It is also underlined by the black and white photographs on the walls of many pairs of hands shaping the clay. 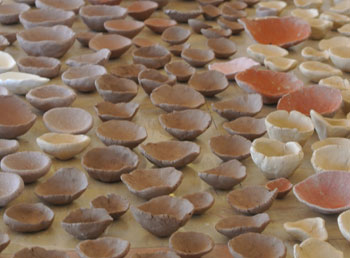 In installing the mass of pots at Watch This Space, the artists initially took their cue from the central Australian landscape as seen from above, with all the subtle variations and movements of earth, rock and vegetation. These variations are expressed by the different coloured clays that were used, some of which were also fired, a process which changes their hue, and by the way the light falls on different shapes – some taller, sone wider and so on.

As the installation unfolded, said Lyon, the artists were also reminded of the footage of tsunamis and the way in which they pushed a sea of objects before them – an extreme manifestation of the longer slower forces always at work in shaping the landscape.

The installation at the Space is still evolving. There’s a bag of clay available and visitors are invited to make their own pinch pot and add it to the collection. 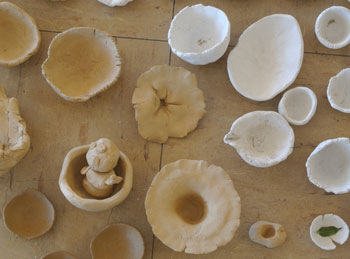 ‘Deviant’ forms are also accepted. The artists have arranged some of their favourites on a shelf in the gallery – like the relics of an archeological dig. Now deviant forms (left) are also being added to the main body of forms.

What the work can become next is an open question. Most of pots are unfired which means that their clay could be recycled and used in other projects. But before that happens there may be further installations. At a local clay pan is one possibility. In fact some of the pots, the darkest brown ones (above right), are made from a local clay that the artists collected and cleaned.

Shows at Watch This Space, 9 George Crescent, until November 1.

(For Suzi Lyon): Immerse yourself in this watery world

(For Mel Robson): Beyond beauty