A life lived at the frontier of enormous change 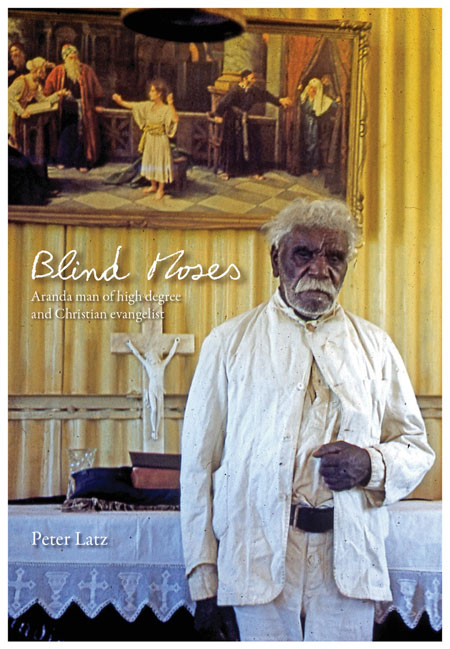 In 1876, as a German Lutheran scouting party of three entered Western Arrernte country to explore the Hermannsburg lease where they would set up a mission, a small Arrernte boy was watching. Probably many were, but this one grew up to leave us an account of his life, lived right at the frontier of the enormous changes that would sweep through his country.

His name was Tjalkabota, son of Tjita and Aranaljika. He came to embrace the Christian faith and took the name Moses, becoming an evangelist of the new ways, the black ‘Messenger’. In later life he dictated, in Arrernte, a series of recollections to the missionary F.W. Albrecht. This invaluable text was translated by F.W.’s son, Pastor Paul Albrecht, and included in his book From Mission to Church, published in 2002.

Now it lays the groundwork for a biography, Blind Moses (‘blind’ referring to the loss of eyesight that afflicted Moses in young adulthood), by central Australian botanist and author Peter Latz.

Moses’ text has its limits, which Latz outlines in his introduction, but what it does beautifully is put the reader imaginatively into Moses’ world. This starts with his evocation of an early childhood untouched by outside influence. We are right there, as if just behind the bushes, watching a well-supported little boy moving about his country – some of the best-watered and most fertile country in the desert – with his small family group. We see him at play, we hear the instructions and admonishments of his elders, we learn what the family eats and how the food is obtained, how they cope when the weather turns, when illness strikes.

It has an Edenic quality in part and this is strengthened by the context Latz brings to it of his own vividly recalled childhood amongst the Western Arrernte. Many of the games Tjalkabota played were still being played towards the middle of the next century when Latz was born to Lutheran lay missionaries at Hermannsburg. He was raised by Arrernte nannies and became fluent in their language. His preferred playmates were Aboriginal boys and their preferred habitat was the bush, out of sight of the mission. They had an enormous amount of fun and as they went along learnt a lot about how to live in the bush. This experience was foundational for Latz’s future career as Australia’s foremost non-Aboriginal authority on desert plants.

Moses’ text also recalls harsh realities, in particular the fear of attack from outsiders. In his early childhood, these were exclusively other Aboriginal people. The worst of the experiences is the massacre at Irpmangkara (Running Waters on the Finke River), in which some eighty men, women and children died, including two of Tjalkabota’s playmates. It was a revenge attack by a neighbouring tribe and in turn would be avenged, with every one of the attackers tracked down and executed over the next three years.

Latz argues that Moses’ rejection of this kind of internecine killing had a key role in his embrace of Christianity. He saw a case for reform and hoped to persuade not only his own clan of it, but other Aboriginal groups throughout The Centre. This brings him into conflict, of course, with the fierce and proud keepers of Arrernte tradition. And again, we have, through Moses’s recall, this marvellous window seat as he confronts his elders with scepticism, challenges, rejection.

Through him we hear their appalled reaction when the children come home reciting the ABC: “Oh, the children are talking like crows.” We hear the anguish of his parents as they see him renouncing the old ways and fear for what it will cost him: “Boy, if you continue here, your head will implode, and you will dry up. Then the wind will blow you away to the sand hills like a dried up cicada, and we will be unable to find you.” After Moses’ baptism, we see his father trying to make sense of what has happened to his son,  comparing it to his own experience and world view, and finding it all a poor second; we hear the arrogance of youth in Moses’ replies. We witness the family members’ increasing estrangement from one another – a painful, intimate entry in the social change balance sheet.

But Moses is inspired and plunges on, catching the missionary zeal of the Europeans and in turn, instructing them in the Arrernte language and custom. He also finds in the Christian message the fortitude to accept his many personal losses, including his eyesight as the result of measles infection and the premature deaths of all nine of his children and some of his grandchildren too. Some of this stoicism may have come from Arrernte psychic resilience but in his recollections he says to Missionary Albrecht: “God gave me children and took them away again. I continued to pray to God, ‘God, make my faith stronger and stronger, so that I continue to believe, that I will see my children with Jesus when I arrive in heaven.”

Moses’ own account of his long life is short and with many gaps. Latz builds around it, drawing on his personal experience, knowledge and relationships, and reading widely in the archives and historical literature. At times, for want of source material, Moses drops from view and the story of the mission takes over. If only Missionary Albrecht had drawn Moses out further as he took down his recollections, or schoolteacher Heinrich had translated some of his sermons as he said he would. And then we wonder that the missionary recorded as much as he did, given the enormous workload that he undertook daily, as did his predecessor Carl Strehlow.

Looking back from our more secular post-colonial times, we cringe at some of the missionaries’ rigidities and paternalisms but have to recognise too the faith-driven agilities of mind and spirit that had them living with the Arrernte, learning their language, enduring many of their hardships – sickness, flood, drought – a very long way from home. What comes across too, especially in the case of Carl and Frieda Strehlow and F.W. Albrecht, is the strength of their regard for the Arrernte, if not all then certainly some and most especially Moses himself and his wife Sofia.

Given the unfolding European settlement of The Centre all around Hermannsburg, Latz argues that it was much better for the Arrernte that the mission was there. In the hard times it meant the difference between life and death for many, and the missionaries were also a voice for greater justice, speaking out against harsh, at times deadly dealings with the locals by some settlers and authorities.

Moses remembers life before any of this came into play; Latz remembers Moses (he was twelve when the revered old man died). His biography offers us a living link to this fascinating past, uncovering in a lively, at times irreverent narrative a story that deserves to be told.

The cover photograph (above) was taken by Pastor Samuel Gross. It shows Moses inside the church that was built for him at Jay Creek. Courtesy Strehlow Research Centre (Gross 0419). Book design is by Elliat Rich.

Declaration of interest: Kieran Finnane provided assistance to Peter Latz in the later stages of the production of this book.