Building height vs economy debate in secret, so far

PHOTOS: The old Melanka hostel, bulldozed five years ago. On the site a complex eight storeys high may now be built. A previous proposal to go to five storeys caused uproar.

Building height limits have long been a hotly debated issue in Alice Springs, and so is the now desperate need for major projects to crank up our economy.

You’d think that our governments – local and NT – would leave no stone unturned to involve the public in discussion of these seemingly contradictory objectives. You’d be wrong.

Chief Minister Adam Giles on August 30 made a passing reference to an imminent development on the old Melanka hostel site.

Then nothing penetrated into the public sphere until Mayor Damien Ryan reported plans for an eight storey building at the council meting last week.

He did so in the “confidential” part of the meeting.

That means far from equipping the elected members with information they could communicate to the people, including those who elected them, the councillors – and everyone else in the room – could face a term or imprisonment if they breathed so much as a word about this outside the chamber.

The bastardisation of our democratic processes didn’t stop there.

The Alice Springs News Online has learned that the closed town council meeting was shown a computer generated video. It simulated views of how the proposed eight storey building would look from from various angles, as seen from a helicopter, or from the top of Anzac Hill, for example, as our sources explained.

It showed what views the building would or would not obstruct.

Our sources say the impact on the vista from Anzac Hill, for example, would be negligible, judging from that “imagery/video flyover”. 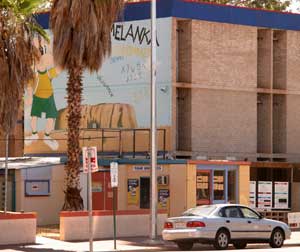 Its existence was confirmed by a media minder of the Planning Commission when we asked her for a copy for publication ahead of the meeting.

We explained that we would publish it as an illustration of further coverage of this subject, so vital to the town, possibly as a YouTube video embedded into a report, as we have done many times before.

The request was rejected with the only explanation being that commission chairman Gary Nairn had decided that “at this stage, the imagery is for internal use only”. Mr Nairn did not respond to our request to contact us. We could watch the “imagery” at the meeting, the minder said.

Mr Nairn is a powerful backroom operator within the CLP, arriving in Darwin from Sydney in the late 1980s and soon becoming a “favourite individual” within the CLP presided over by Shane Stone at the time, according to long-time CLP watcher Alex Nelson.

Mr Nairn soon took over from Mr Stone who became Chief Minister. Mr Nairn returned to New South Wales and in March 1996 was elected a Liberal Party member of the House of Representatives, representing the seat of Eden-Monaro.

After losing his seat in the 2007 Federal election he returned to the NT. He was appointed as the Planning Commission’s chairman as soon as the CLP regained power two years ago.

The commission’s advertising for the public meeting labels the occasion as an “information session” where the public can learn about the commission’s “work in developing strategic plans and planning policies for the Territory”.

The advertising does not make it clear whether the commission would listen to or act on anything that the Alice Springs public may put to it.

The Melanka land, the eight storey height and the “imagery/video flyover” do not get a mention in the advertising.

A media release today says the commission “will meet in Alice Springs for the first time this week” and Mr Nairn “aims to hold at least one meeting outside Darwin every year, to keep members better informed about regional developments and issues”.

It’s clear that the one commission meeting a year outside Darwin may not be in Alice Springs.

UPDATE: Since posting we have received the following email from Mr Nairn:

Thank you for your email to the Minister for Lands, Planning and the Environment regarding amongst other things, building heights.  The Minister has advised me of your request to obtain a copy of the 3D modelling that is being used by the Planning Commission to inform its discussions with the community.

As you will be aware I will be in Alice Springs tomorrow to talk with the community primarily on the role and responsibilities of the planning commission which will also include a demonstration on a 3D modelling tool and how this technology can be used to inform community discussion on such matters as building heights.  I am of the view that being able to animate a 3D model by inserting spatially accurate proposed developments will prove a great planning tool particularly when it comes to community consultation.

thanks for your email (I’ve added it to the story which was posted before I became aware of it).
I’ll be at the meeting, thanks also for the invitation.
Re the size of the file – I’m happy to call into the department’s Alice Springs office and pick up a USB first thing tomorrow.
I think the community would be well served by getting a chance of looking at it before the meeting.
Kind regards, Erwin
Facebook
Twitter
Pinterest
WhatsApp
Previous articleAttempted car-jackings by youths – Lawrie
Next articleA life lived at the frontier of enormous change