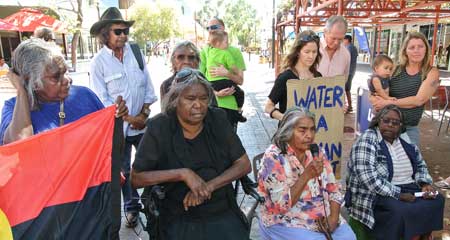 PHOTOS: Above – Barry Abbott addressing the rally. Amelia Turner with the sign, “Turn on the tap!”. MLA Alison Anderson with the “Build homes not jails” sign. At right (seated, from left) – Felicity Hayes, Theresa Ryder, Leonie Palmer and Margaret Kemarre (MK) Turner OAM. Behind Mrs Ryder is Ursula Nicholoff-Johnson. Jack Hayes (with hat). At right in the photo are Natalie Wasley, Rod Moss and Kat Hope (with baby).

A call by Alison Anderson on Bess Price to move her electoral office from Todd Mall in Alice Springs to Yuendumu, and Margaret Kemarre Turner’s suggestion that the United Nations should “come and see what the governments are doing here” were examples of the outrage expressed by speakers at a rally this morning over the disconnection of water to the Whitegate camp.

Other comments made it clear that the Whitegate residents, and their supporters, are determined to launch the row into the national arena.

Ms Price, the NT Minister for Community Services and Women’s Policy, was firmly the target of the 50-strong protest outside her office.

She did not appear – according to her staff she was in hospital. She did not respond to a message requesting comment. Neither did any of the other local CLP politicians put in an appearance.

Most of the speakers gave part of their addresses in Arrernte.

Ms Anderson said the community of Alice Springs is given the opportunity to co-exist with the Arrernte native title holders: “Let’s give them the same respect back.

She called on the town: “Let’s not tolerate racism. We all know how good the CLP is at that. I’ve been with them, so I can tell you that. They are just like their forefathers. Exactly the same rednecks.

“If the Minister wants to use her upper hand on these people, then I think it’s time that you, Bess Price, move your office over to your country, in Yuendumu.”

This is not CLP country, said Ms Anderson: “This is Arrernte country … the CLP can pack your bags and go.”

Amelia Turner (daughter of  MK) said: “Bess Price, you are an Indigenous person. You can’t take over someone’s land just because you work for the CLP.”

Barry Abbott said the relocation of the Whitegate residents into other camps, as proposed by the government, is not an acceptable solution: “Too many people go into the town camps these days … from different tribes … from all over the country … instead of leaving them in their own communities. That’s where the problem is.

“Don’t push these people around. They’ve been there for 40 years. Please give them their water back.”

We own this place, said Mr Abbott, “not to be pushed around like bloody chooks.”

Leonie Palmer is the aunt of Myra Hayes, who led the plaintiffs in the successful Alice Springs native title claim in the Federal Court. She said her niece was at Old Timers seniors village now: “She really wanted a house built at Whitegate” which is a “big place for ceremonies, for sorry business.”

She addressed Ms Price by her ‘skin’ (kinship) name: “Please turn the water back on, Nungarrayi.”

Mrs MK Turner took up the issue of people from different tribes being “all piled up, all the other different language speakers are piled up where Arrernte land was.

“All the families at Whitegate were very happy there. We need the United Nations come and see Whitegate, what the governments are doing here.

“They go and sit on the government chair, look down on our families. A lot of people supported you as well,” she said to the absent Ms Price.

In the town camps are “all these people who don’t belong to this country,” she continued. When people were transferred to Hidden Valley “it was just like hell”.


Author and artist Rod Moss said it was “a shocking thing” to have received the Chief Minister’s literary  award for each of his two books about Whitegate, written over 30 years: “To think of him shaking my hand and looking me in the eye.”

Maybe the protest “is just what is needed for attention on a national scale, the thing that may backfire on them, the beginning of the momentum to get the change that we need,” said Mr Moss.

Artist Dan Murphy (at left) asked the rally: “What’s the point of recognition in the constitution if you can’t recognise people on their own land?”

FOOTNOTE: Just as the rally wound up local police issued the following media release: “A 37-year-old man will appear in Alice Springs Magistrates Court today after he allegedly stabbed a 42-year-old man.

“The two men were involved in an altercation at a residence at Hidden Valley Camp on Friday evening 12 September, when the offender allegedly stabbed the victim.

“The 42-year-old man was taken to Alice Springs Hospital to receive treatment for injuries to his chest.”