Mereenie Loop Road on the never-never

Transport Minister Peter Styles (pictured) is giving no time frame for the sealing or even the upgrading of the Mereenie Loop Road, a key in efforts by the tourism industry to make Alice Springs again the gateway to The Rock.

This is despite a clear indication that the Central Land Council (CLC) is willing to discuss any issues including access to gravel pits.

Mr Styles said yesterday in a response to the Alice Springs News Online: “Further works to seal the outer Mereenie Loop have not  been budgeted for in 2014-15. There is a significant amount of planning work to be undertaken to upgrade the outer loop.”

The 2013-14 Budget provided $4.85m for the “completion of the seal on Namatjira Drive as part of the Mereenie Loop.” (Regional Highlights)

“The length of road left to upgrade is approximately 180km long and would require $100 million plus to complete the upgrade,” says Mr Styles. 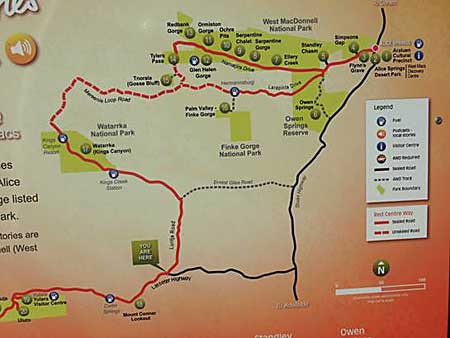 “The design concepts, timing, scope, tenure arrangements and staging of the works will all need to be explored prior to any further discussions with Traditional Owners.”

The Alice Springs News Online on August 24 said: “It’s common belief that the Central Land Council’s blocking access to a quarry is making the cost of sealing the Mereenie loop prohibitive.”

And the CLC provided the following statement: “In October 1993 the CLC and the NT Government signed an agreement to permit the Mereenie Loop road to be constructed for tourist use.

“The agreement specifically provided for the CLC to undertake all sacred site clearances for the new road, gravel pits and so on, and the existing road was built.

“Without very significant concessions by traditional landowners over the years there would have been no road and despite its considerable commercial value as a tourist link the owners have never received acknowledgement of the benefit their decisions have brought to the local tourist industry.

“The CLC is not ‘blocking access to a quarry … making the cost of sealing the Mereenie loop prohibitive’. This is a convenient excuse for government inaction. The CLC and traditional owners are ready and willing to move the process on and look forward to the government re engaging in discussions.”

Says Mr Styles: “The most significant factor with sealing the Mereenie Loop remains cost, as with all major infrastructure projects, works will be prioritised as resources are available.

“The current Government is committed to enhancing the Territory’s visitor experience, upgrading sections of the Mereenie Loop are continuing, with more works expected to be underway this year.”

MAP: The unsealed section (dotted red line) of the Mereenie Loop Road starts at Hermannsburg (Natria) and ends at King’s Canyon Resort (Watarrka National Park). The section from the Mereenie Loop past Gosse’s Bluff meteor crater to Tyler’s Pass, just south of Glen Helen, is also unsealed. The short access from that road to Gosse’s Bluff is recommended for 4WD only.