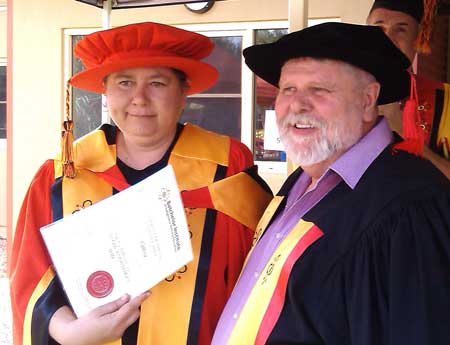 Chief Minister Adam Giles said he has given instructions for the percentage of Aborigines in the NT public service to be doubled from 8% to 16%.

Mr Giles, who was speaking at the graduation ceremony of the Batchelor Institute today, said the NT has 20,000 public servants.

He said the 126 graduates should be optimistic about getting work.

The economy would go though a brief downturn as it reduces its dependence on public money, including from Canberra, and the endeavours by his government to crank up private enterprise and investment kick in.

He said half the government’s programs in the regions go to Aboriginal people.

The Batchelor Institute’s first doctoral qualification was conferred to Kathryn Gilbey (pictured with Professor Markham Rose), who completed a PhD in Indigenous Knowledges by Research. She is a staff member of the institute.