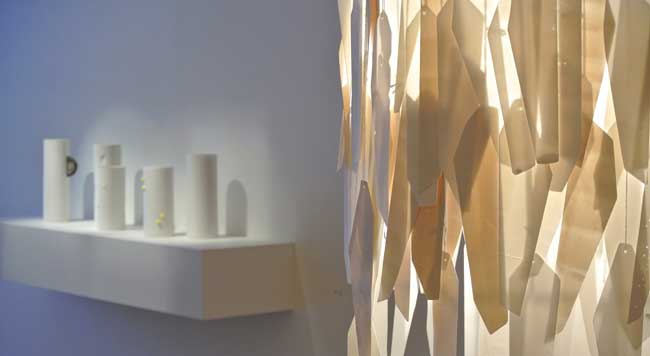 The brilliant white bark of the ghost gum, its apparent smoothness and the grace of its limbs are what immediately catch our eye as we move through the bush.

Botanist Peter Latz looks beyond appearance to the usefulness of plants, suggesting when he opened Ghost Gums, an exhibition by Mel Robson and Elliat Rich at Araluen, that the ghost gum is really a bit of a “bimbo” compared to the humble bloodwood.

“For us humans all it does is look beautiful”, he said, whereas at the right time from the “fairly ugly” bloodwood – which he calls the “supermarket tree” – you can get just about anything you want – medicine, water, honey. 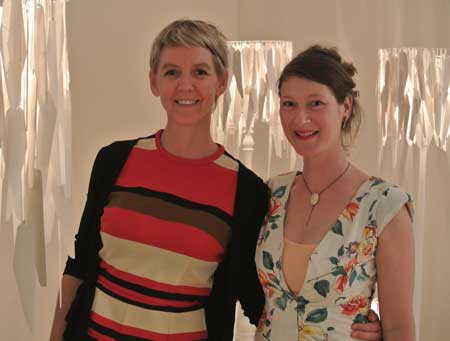 Latz also entertainingly picked up on the sexual suggestiveness of the creases and folds in the ghost gum’s bark as the trunk forks, which immediately brought to mind artist Henry Smith’s Tree Song, shown at Araluen in 2008. In a dazzling series of seven, he rendered the gums’ lovely leaning and long, slow dance-like rhythms, and then up close an almost confronting level of detail, so suggestive of features of the female body that are usually covered or veiled – breasts, nipples, tufts of hair, vaginas, and the signs of age.

The sentinel character of the trees in the landscape and their dancing rhythms have caught the eye of many artists. Latz mentioned Albert Namatjira and Dan Murphy, and irreverently wondered whether the ghost gum hadn’t been “painted to death”.

“Then these two ladies [Robson, at left in the photo, and Rich] come along, and they make me look silly, they make me see something in the ghost gum that I haven’t seen,” he said, before declaring the exhibition open.

What that insight could be was left to each of us to ponder.

The artists have not approached the trees in the singular. We enter the gallery space as if entering a grove. If there’s a dance, its grace is stately rather than sinuous and seductive. Its rhythm is established in the calm resonance of the trunk-like forms leading our eye into and around the rooms. 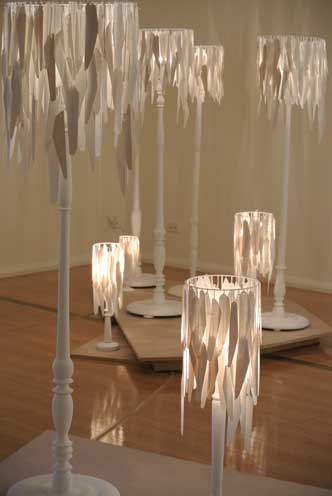 These forms – found in the stems of vintage standard lamps – emphasise the straight up-thrusting of well-watered trees, rather than the twisting and turning of those that have had to look harder for their moisture. The spreading of branches is overlooked in favour of the qualities of the canopy. These are evoked in the clustering of leaf-like shapes, over 2000 of them – making up the lampshades – each individually crafted in porcelain, and together tinkling with an almost tinny sound as air currents stir them.  And just like leaves of a tree in nature, each shares the character of its fellows while also having its own.

This individuation quietly challenges the impression of purity and perfection that is our first response. This is given a more emphatic treatment in the porcelain vessels, where found objects extrude from the finessed surface, or even more restrained disturbances – tiny holes and bubbles – have been developed.

Robson, a ceramicist, and Rich, a designer, tread with assurance the porous border between craft and art. Their interest in objects, materials and processes is unequivocal, but they work this with a deep attention to concept, aesthetics, and social and environmental contexts and ideas.

Look carefully, stay a while and let the understated loveliness of this work exert its subtle influence upon you.