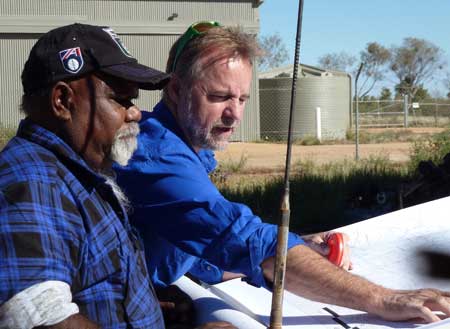 There is a lot of discussion about work – mainstream, private, lucrative and honourable – achieving for Aborigines what four decades of social engineering and handouts have not.

Nigel Scullion (pictured with a Top End elder), the first NT based Minister for Indigenous Affairs, says: “Economic development is absolutely central to my agenda of moving Aboriginal people away from some of the misery that some of them find themselves in. People don’t want to live in poverty, they want real income.”

Mr McCarthy’s opposite, Minister for Central Australia Matt Conlan, has had nothing to contribute to the debate.

On the opposite end of the argument, Blair McFarland, in a three-part series in this newspaper, claims a hunter/gatherer lifestyle remains an option – albeit clearly at the perpetual expense of the taxpayer.

Mr McFarland has for nearly three decades been a prominent player in The Centre’s equally burgeoning NGO scene, in part as the instigator of the widespread introduction of the non-sniffable Opal fuel.
Cr Steve Brown, vigorously expressing his views in this publication, and relying on his own experiences during a life in The Centre,  contrasts the integration of Aborigines in the local economy decades ago, with their passive welfare existence of today.

Department of Business Chief Executive Peter Carew is taking up an interim position in the Department of Chief Minister to develop policy focussing on Northern Australia development.

Dozens of readers have given their views in comments to our reports, as Alice Springs sees itself at the tipping point between the booming international tourist centre it has once been, created by private enterprise in partnership with the NT Government, and becoming a town making its living from delivering welfare funded for the greater part by the national taxpayer.

Senator Scullion is on a tightrope walk of his own: he clearly does not want to amend the Land Rights Act which would trigger a national outcry by lower-case ‘l’ liberals in the cities – however ill informed.

On the other hand he has a cast-iron determination to help Aborigines onto their own feet, by firstly making compulsory education really compulsory, and secondly, by promoting the use of massive black assets to turn a dollar.

He insists it can be done under the current legislation by granting long-term leases which gets around Aboriginal freehold being “inalienable” – that is, it cannot be sold. However, the value of a lease can be mortgaged, and so can what the land produces, from cattle to grapes.

In November last year Senator Scullion told us: “You wouldn’t want me to tell you what to do with your land, would you? If you own a couple of acres, would I have the right to tell you, go and grow veggies and improve your asset base?”
We took up the issue again with Senator Scullion last week: What about if that land wasn’t a couple of acres, but a million square kilometres – half the Northern Territory, we asked him. Why can’t their land be turned into an assets which produces money?

SCULLION: I am very keen on economic development on Aboriginal land, and I’ve been talking to the land councils. They tell me they are land rich and dirt poor. They are looking for ideas, for investors.

NEWS: Where is it happening?

SCULLION: The Tiwi Islands are a stand-out. There is significant investment on what is inalienable land. They have a wharf that looks like half the size of the Alice Springs airport. There is no impediment to investment, because investors have invested somewhere else in the same circumstances.

NEWS: Why is it not happening in Central Australia? We know that after some 40 years of landrights coexisting with abject poverty, the Central Land Council is not interested in commercial development of Aboriginal land, or capable of making it happen.

SCULLION: I’d like to see them become very engaged in economic development. Yes, they have spent 40 years gathering eggs, they have become egg gatherers by convention. What the people want is for them to become egg hatchers, to produce something from the land. It needs a different set of skills. I’ll be speaking to the land councils at length, and the land owners, how they can get a realistic income from their lands, so they don’t have to rely on welfare.

NEWS: That should have been done decades ago. How will you make it happen? Your government has departments of business, finance, labour. Will it be a whole-of-government approach?

SCULLION: We have the Indigenous Land Corporation (ILC) and Indigenous Business Australia (IBA) . They deal with native title applicants and the full implications of native title, partly through the Land Fund. They can purchase land.

NEWS: Half the land in Central Australia has been owned by Aborigines as freehold for decades, a recognition of their traditional ownership over millennia. It doesn’t have to be bought. They own it.

SCULLION: The skills the ILC and the IBA have, in terms of land development, acquisition, partnership, marketing, are available to Aboriginal people and the land councils. Hopefully that will accelerate the opportunities that come from land ownership.

NEWS: Let’s assume there is a pumpkin grower on the outskirts of Adelaide. She has skills, capital, equipment and markets. She enters into a joint venture with a family in Yuendumu which has plenty of land, water and idle labour. A win-win situation. Would Centrlink then have the occasion of stopping the dole to people working there? What’s more, is such a joint venture is feasible, there is no case for welfare to continue.

SCULLION: Only the first part is a realistic part. It has clearly been instrumental in Ali Curung with its water melon plantation. There is a view in Ali Curung that are 30 strong young men who play football, and do very, very well. But for whatever reason that is completely unclear to me, they are not fit to work in a workplace five kilometres away. There is a whole range of excuses that are being put to me for that. I think there is room to adopt scrutiny in these matters. There are a number of people in the community – and I commend them – who have jobs there and positions.

NEWS: I understand there is only one.

SCULLION: There are three, which is obviously nowhere near the number that are needed there. The jobs are absolutely not menial – there are machinery operators, there’s a whole range of jobs. It’s not just saying, we’re going to pick watermelons. Because of their permanent residence within the area they would rise in the ranks very quickly. The question is, what is the difference? Is it again about the passive racism that operates throughout our country? It leads to outcomes different to the policies intended.

NEWS: It seems your government has the power to change that. Centrelink could say to the 30 footballers, you are offered a job on the watermelon plantation and so you don’t get the dole any more.

SCULLION: Those questions have to be asked, and Ali Curung is a case in point. How have we come to be in this situation? I’m seeking and getting information of that type all the time. As has been announced, there will be some amendments as to how people receive their welfare payments. That’s a matter for someone else.

NEWS: As the Minister for Indigenous Affairs would you not have an influence on these matters?

SCULLION: Absolutely. And it has an inordinate impact. If there is work available then people should be working. It’s a bit like school attendance. Why should it be with Aboriginal kids that it’s their choice whether or not they go to school. My son use to play with Aboriginal kids. If he wagged school I used to get a phone call. The parents of his Aboriginal mates with whom he grew up didn’t, because of passive racism. It’s all too hard. “You’ve got to understand, Senator. It’s all about culture.” There should be no difference.

NEWS: What will the new work for the dole scheme be like?

SCULLION: There will be no difference between any Aboriginal person and any other person. I think that’s the most important change we can have. Everybody should be dealt with exactly the same.

NEWS: Will it be different to the old CDEP?

SCULLION: There were significant elements in the old CDEP that were very useful, because it engaged people purposefully. But as with all programs they have to be run correctly. You can’t be paying people who don’t turn up.

NEWS: Should it be money-making work?

SCULLION: There may be but it won’t be there immediately.

NEWS: Should there be more enterprises such as the watermelon plantation at Ali Curung?

SCULLION: I think there are a lot of opportunities out there and we won’t need to make any changes to the legislation. We also need to create opportunities. That synergy between the ILC, the IBA, the land councils – all of us need to have a focus on economic development.

NEWS: To what degree will you be driving it as the Minister?

SCULLION: I think economic development is the key for Aboriginal people to move away from the circumstances in which many of them find themselves today.