Questionmark over funding for Desert Knowledge 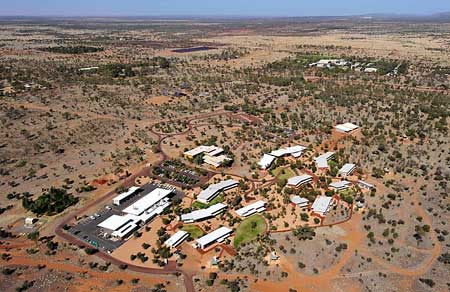 Mr Huigen announced today that the NT Government is undertaking its first review of DKA since it began operating under the Desert Knowledge Australia Act in 2003.

He said: “This is a timely opportunity to actively demonstrate our practical achievements since we began 10 years ago as part of the Alice in 10 project.

“Because we are often ‘behind the scenes’ building partnerships to create outcomes our contribution is sometimes hard for people to see. This review is an opportunity to highlight our achievements.”

Desert Knowledge Australia (DKA) is in “in discussion” with the NT Government about its funding.

Both the chairman, Fred Chaney, a former Coalition Federal Indigenous Affairs Minister, and CEO John Huigen are confirming this but will not comment further at this time.

The organisation, operating from and managing a $35m precinct (above), accommodating also the Centre for Appropriate Technology and Batchelor Institute, was allocated $960,000 in the 2013-14 NT Budget.

After a visionary start in Central Australia 15 years ago as the champion for the arid inland, the concept has failed to ignite public support, or even produce an understanding of what it is actually doing.

DKA has an obvious pivotal role in race relations. Its take on “Intercultural Collective Impact” includes: “Sustainable social impact … shared vision and alignment across and within agencies … a learning environment wherein we can challenge our mental models and grow … high performing, self managing and cross-agency teams driving improved outcomes … identification and optimisation of tangible and intangible assets” and so on.

Yet when the Alice News approached DKA recently about applying these aspirations on the ground we drew a blank.

We raised questions about creating incomes from Aboriginal assets with DKA, believing it might be pivotally placed to broker joint agricultural, horticultural or tourism ventures with the owners of half the NT’s landmass. However, Mr Huigen (pictured) said they will not buy into the issue as Centrefarm is covering that field.

We put to Mr Huigen that decades of involvement of that Central Lands Council arm has shown few results. He provided a response which is a “private communication not for publishing”.

DKA makes much of its business network but will not disclose the amount it spends on it. The question begs whether Google wouldn’t provide the same facility at no cost to the taxpayer. Just try: “Plumber, Mt Isa.”

On other initiatives too, such as the leadership programs (no doubt rewarding to the participants),  the cost / benefit to the community is unclear.

Mr Huigen has offered to provide detailed information and the Alice Springs News Online will continue its long and detailed coverage of the issues (google our archive).