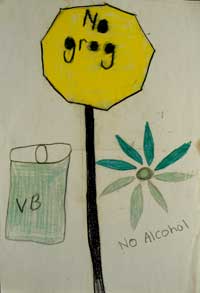 As NSW and Victorian governments focus on late night alcohol demand, Gino Vumbaca, executive director of the Australian National Council on Drugs (Sydney Morning Herald, 17/12/13) writes “it is worth recalling the trauma endured by the family of Thomas Kelly, from that fateful night when he was king hit, to his death two days later, to the court case, to the ongoing loss they suffer.

In the same week the court case caused headlines, the all-too-common ingredients of alcohol and a fatal drunken blow crushed yet another family.  One man lies in a coma, many continue to receive treatment for injuries from drunken assaults, and yet much of the carnage is still unreported.

“How some can believe that these incidents have always occurred and that media reporting is now overstating the extent of alcohol-related problems is simply a view without foundation.

“The response to date is typical. It is the usual mix of outrage over the behaviour and sympathy for the victims. As is also customary, this has amounted to little real change.  Many only want changes that won’t affect them personally.  Industries that promote and sell alcohol don’t want their profits affected.”

THE COST OF ONE FASD DISABILITY SUPPORT OVER A LIFETIME ESTIMATED AT $15M.

Helen Davidson writing in The Guardian (18/12/13) says that drug and alcohol professionals have renewed angry protests at the withdrawal of $1.6m annual funding from Australia’s drug and alcohol advisory body (ADCA) just as police launch major operations against alcohol-fuelled violence.

ADCA was a contributor to the government’s report into foetal alcohol spectrum disorder, FASD: the Hidden Harm in 2012 and a 2011 inquiry into FASD, and has been involved in education and awareness campaigns to ensure mothers know about the dangers of drinking while pregnant.

ADCA is arguing that one single case of foetal alcohol syndrome would cost the government considerably more to manage than an entire year’s funding. It’s a point echoed by politicians opposed to the cut.

“I know those opposite claim that we are in a budget emergency, but let’s have some perspective,” Canberra MP Gai Brodtmann said in parliament earlier in December.  “The cost of one Australian living with foetal alcohol spectrum disorder over their lifetime is $15m. That is almost 10 times the annual budget of ADCA.”

Thirteen per cent of deaths of young people are attributed to alcohol and thousands of people are still arrested each month for drink driving despite what everyone knows.  It’s an ugly picture, which is estimated to cost more than $15.3 billion a year, the report says.

DECK THE HALLS, NOT EACH OTHER

Long-time Byron Bay local, Rusty Miller writing on the changes he’s seen to the iconic town (Rusty’s Byron Guide,  Dec. 2013) writes about the Last Drinks at 12 group “formed in 2013 in response to the high level of night time alcohol-related violence in Byron Bay.”

He comments that while this may not work on its own – we know from Western Australia’s successful alcohol supply reforms to date that it requires a multi-pronged approach  – the Byron community are at least doing something by recommending a civilized hour for last drinks as a measure to bring confidence back to the local business economy.

THE ECONOMIST HAS A RE-THINK ON A FLOOR PRICE

Under a headline, “Raising the price of booze saves lives and money.  Scotland is right to try it”,  UK-based conservative journal, The Economist (21/12/13) declared: “Among man’s earliest artefacts are vessels to store and carry booze.  Drunk from Stone Age jugs or Etruscan amphoras, fermented sugars have brought cheer for more than 12,000 years. And headaches too: alcohol stokes rage and gloom as well as jollity and dancing.  For liberal-minded types, the downsides are a personal matter—we should be free to frolic. Within limits.

“Where the harm extends beyond the individual, there is a case for intervention. Global alcohol consumption is stable. But some people are tippling more, in ways that hurt themselves and others .

“At stake are not just vomit-drenched streets. Deaths linked to drinking have tripled since 1990; in that time alcohol has gone from the sixth to the third leading cause of death and disability worldwide.”

Dr John Boffa, a member of Alice Springs-based  People’s Alcohol Action coalition (PAAC) has been heard on ABC Radio National (21/12/13) commenting on the Economist article, questioning its claim that a floor price will lead to much bigger profits for the alcohol industry, saying “this is only based on projections from one type of economic modelling and is not as yet proven and may not be true.”

Education campaigns have also fallen on deaf ears, but those concerned about a floor price increasing the cost of their grog may be interested in the Taltarni Shiraz Christmas promotion “Buy 6 and get 6 free”.

News Ltd. (19/12/13) reported that in Queensland, “sly groggers are facing the same tough laws applied to bikie gangs amid concerns bootleggers are buying up boats and cars with their lucrative profits.

“In one of the clearest signs that alcohol management plans are failing, internal State Government correspondence has revealed that sly grogging has become so profitable that law makers are now considering targeting them under proceeds of crime laws.”

I confess to watching a miniscule amount of commercial TV per year, but I was recently made aware of a local television commercial which promotes the idea that in social situations, you need alcohol to have a good time.

With global corporation SAB Miller paying $12.3b for Fosters, it’s not going to be easy to contest the Aussie drinking culture with a message based on reality, rather than romanticized concepts, the like of which, according to physicians, claimed the life of James Bond in his 50s.

On the Queensland Sunshine Coast, over a three day Christmas period, approximately 6% of drivers given a RBT tested positive to DUI (Regional News, 27/12/13).

Here in the NT, we are ahead of national consumption figures and with a vulnerable welfare class, already a toxic state.  We are a test-case for the alcohol industry’s profligacy, with FASD children, socially approved by a hip middle-class.

Making money while the sun shines 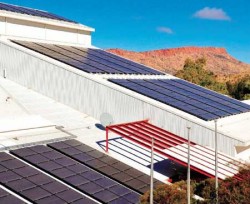 The electrical "cake" of Alice Springs is $57.5m a year. How many of these 230,000,000 kilowatt hours annually are from renewable resources, mostly from the sun, how many should be, or could be? That, in a nutshell, were the questions asked by the Alice Solar City 2008-2013 project that came to an end with the release of a handsome book this month. ERWIN CHLANDA reports. PHOTO (from the report): Part of the Araluen array.