Spirit is fine but there needs to be fun 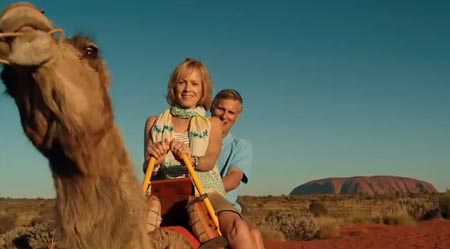 The 10 year slide in tourism numbers has been stopped. This season there has been a 1% increase in visitor numbers, and the average length of stay has also gone up, says Tourism Central Australia’s Jaclyn Thorne.

She attributes this to a better relationship between the NT Government’s Tourism NT and operators, especially low cost Tiger Airways and its “Alice Springs, your Base Camp to Adventure” campaign.

The new $1.2m campaign “Do the NT” is seeking to correct the image of Alice Springs just as “a very spiritual place – it still is – but not particularly as a fun destination.

“When you book a holiday the first thing you want to do is have fun.”

Ms Thorne says the message is that the NT is what it’s always been, but also as a place where you can see your family, have adventure and fun, being active, not necessarily the hard core abseiling or jumping out of a plane.

“If you live in a city and drive through lots of traffic every day, then swimming in a water hole and riding camels, images of Kakadu, actually doing things, with friends and family, laughing, having a good time, being active in the landscape” is a welcome change.

But there are also shots in the TV images of people eating good food, in restaurants and bars.

Ms Thorne says the start of the campaign is a branding and awareness exercise, to be followed by links with trade partners, such as Qantas and Flight Centre offering specific packages.

It seems the “Share our Story” campaigns had few results, but Tourism NT’s re-invigorated relationship with the trade has turned the tide.

Ms Thorne says the shift to Tourism CA’s new office in Todd Mall has resulted in a “significant increase” of people through the door with less of a slow-down at the tail end of the season.

The industry agrees, she says: “The last couple of months have been good.”