The police officer in charge of the investigation leading to the present charge against Liam Jurrah was put through the hoops this afternoon on the way he took a statement from witness Bruno Wilson. Mr Wilson yesterday told the court that he had lied in his statement when he said that Liam Jurrah had a nulla nulla and used it to hit Basil Jurrah three times. He said he lied because he  felt under pressure. He said the police officer had repeatedly questioned him about Liam Jurrah having a weapon and only stopped when he said that he did.

Mr Wilson’s evidence yesterday was that Liam Jurrah was close to the group that attacked Basil Jurrah but he had nothing in his hands and did not do anything to Basil Jurrah. 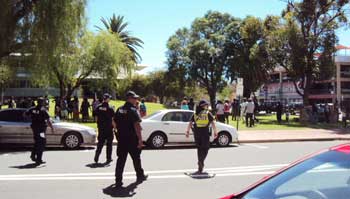 Snr Constable Sean Aila told the court that he had gone to the Corrections Centre to interview Mr Wilson with a “witness statement plan” which, in accordance with police training, is used to “structure the conversation” with the witness. He said it is “not a requirement” to record interviews with witnesses. He only does so “for coronials”.

At left: Police arriving to quell the disturbance in front of the courthouse yesterday.

What happens usually is that the witness gives a “free narrative” of events, which he notes on “a scrap of paper”, then he takes them through the material to expand on its various points. He said with Mr Wilson he would have identified the matter of interest as “the incident at Little Sisters where Basil Jurrah got hit in the head”. He would have mentioned the names of Christopher Walker, Liam Jurrah and Josiah Fry as persons of interest. He said he did not mention any other names. He said he would have explained that there were penalties for not telling the truth.

Under cross-examination by Jon Tippett QC, he said he had not kept his “scribblings” of the “free narrative”; it is “not standard practice” to do so.

Asked if he prepared a witness statement plan for every witness he interviews, he said yes, if the interview is to be “hand-written”. However he admitted that in this investigation, he had only made a witness statement plan for the interview of Bruno Wilson (at right) , although he had interviewed six other witnesses for the case. He said this was because he had done a course in May, the process was fresh in his mind and the other witnesses had all been interviewed before then.

Mr Tippett put to him that in the statement plan for Mr Wilson,  under the heading of “topics to be addressed” was “who hit Basil Jurrah”, with three possible suspects named: Liam Jurrah, Christopher Walker and Josiah Fry. Const. Aila agreed that was so.

He also agreed that it would help now if the “free narrative” were available to compare with the written statement, but he had thrown it in the bin.

He said he was with Mr Wilson at the Corrections Centre for an hour and a half. Mr Tippett said that was also the duration of his interview with Liam Jurrah, the transcript of which comes to over 40 pages. Mr Wilson’s witness statement is just two pages. Const. Aila said that is because the “free narrative” would have taken a while and also, he is “not the quickest writer”.

Asked why he hadn’t attached the free narrative to the statement, he said “no reason”.

He agreed he may have asked  a number of questions on specific matters but denied having questioned Mr Wilson “extensively” on the subject of Liam Jurrah.

In further cross-examination of Basil Jurrah this afternoon, the witness remained firm that, though he, Basil, may have been drunk and “a little dizzy”, it was Liam Jurrah that hit him. (See this morning’s post.)