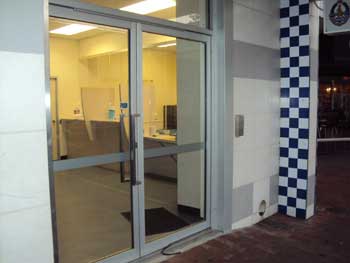 Mayor Damien Ryan is to contact today new police commander Kate Vanderlaan about council’s concern over poor response to calls to 000 and 131441.

The matter was raised in last night’s council meeting by Councillor Eli Melky, in an apparent reference to our report yesterday of the inadequate police response to an attack on the tennis club. Cr Melky spoke of problems of no response to calls and to the dispatcher being “unclear about the geographic location” of Alice Springs.

Cr Melky also wanted some information about the staffing and hours of the police post in Todd Mall (pictured above), including why it is closed on a Saturday morning.


• Hands up: who’s got land for affordable housing scheme?

Council has requested a meeting of all stakeholders to identify parcels of land suitable for the construction of affordable housing, CEO Rex Mooney told councillors last night. The issue was among the subjects for discussion in a meeting between him, the Mayor and John Baskerville, CEO of the Department of Local Government and John Colman, newly appointed Executive Director, Economic Development, Department of Lands, Panning and Environment.

This is in response to the NT Government’s announced Real Housing for Growth, in which the Government will partner with private developers to build 2000 affordable homes over the next four years. Expressions of Interest from the private sector are being called for their construction.

According to a media release from Dave Tollner, Minister for Housing,  the Government will hold a 10-year head lease over the dwellings constructed under the scheme, which will be rented to key skilled workers at 30 per cent below the median rent in that particular area.

Although there was discussion about council’s request for a block of land in the Kilgariff subdivision (for an eventual council depot), the extensive land available at Kilgariff does not appear to be under consideration for the government’s scheme. Otherwise, why the search?


• Council well short of its 20% target for Indigenous employment

Cr Chansey Paech asked whether council is doing anything to promote the recruitment of Indigenous staff. Council has an Indigenous employment target of 20% of its workforce but it consistently falls well short that figure. The current figure is 14%. Mr Mooney responded that while the issue is at “at the forefront of our thinking”, it has to be balanced with budget considerations. He said that the proportion of Indigenous staff at the depot is fairly stable but it is less so in other areas. He mentioned the recent loss of two Indigenous trainees.

In the meantime, council has been approached to become am employer under Correctional Services Minister John Elferink’s Sentenced to a Job program. The mayor has met with Corrections’ Executive Director of Offender Services Programs and Indigenous Affairs and has attended a meeting of NT Corrections Industry Advisory Council.

A “whimsical Dr Seuss style sculpture, recycling old into new” has been given the thumbs up as the public art work to adorn the new waste management facility. The artist is J9 Stanton. No images are available yet. Stanton’s proposal is costed at $69,400. 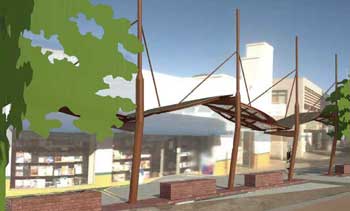 At left: A 3D rendering of the moth shade structures in Parsons Street, for which artist Pip McManus will create the “art canopies”. Image courtesy ASTC, CAT Projects and Susan Dugdale Architects.

With the netball season rapidly approaching, Cr Geof Booth asked whether problems regarding parking, which became acute last year, had been resolved. Director of Technical Services Greg Buxton said “nothing had gone forward” although there had been “numerous discussions”. Cr Booth offered to put Mr Buxton in touch with netball’s new manager, Helen Brown.