A man in two worlds 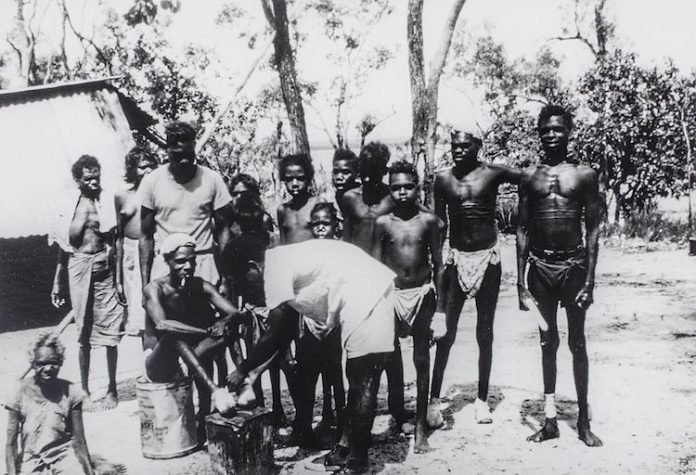 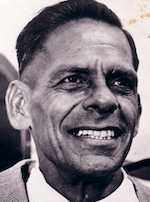 By the 1960s there were Aboriginal people who were becoming prominent in Australia: Albert Namatjira, Charlie Perkins and Lowitja O’Donoghue are well known, but there were others.

Jack McGuinness (at left) was president of the Northern Australian Workers’ Union (NAWU) from 1955 to 1958 and Phillip Roberts of the Alawa tribe became a medical assistant and ambulance driver.

In 1962 prolific Northern Territory journalist, Douglas Lockwood, published a book about Phillip Roberts called I, the Aboriginal.  It was a best seller.

Roberts relates his tribal origins and his gradual integration into white society.  To cope with an ancient culture and a twentieth century culture and maintain an association with both was certainly not an easy undertaking.

As a child he lived with his mother at the Roper River Anglican Mission, which was established in 1908.

The mission was 400 miles south-east of Darwin and fifty miles west of Port Roper on the Gulf of Carpentaria. 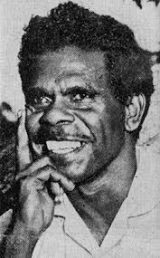 His father, Barnabas Gabarla of the Frilled Neck Lizard totem of the Alawa tribe was away on a droving trip. Roberts (pictured) said his mother, Nora was entirely subservient to his father, merely a chattel, a bearer of sons. Her role in life was ordered by the dictatorship of the tribe according to a sociological pattern.

Roberts’ grandfather was a gnarled and pitted old man who lived along the Roper when the first white men came building the Overland Telegraph.

He was here when the missionaries came.  Yet he was here “Be’Fore” when the only inhabitants were the Aboriginal tribes like the Alawa, the Anula, The Mara, the Ngulkpun plus many others.

Part of the tribal way that influenced Roberts was the corroboree tradition, which was banned to all women.

If a woman went close to a Yabudurawa (corroboree) in his grandfather’s time her head would have been chopped off at once.  Even in the present time, relates Lockwood, death would be likely.

As a boy Roberts experienced being ‘sung’.

When he knew that the curse was upon him, he instinctively rejected all food and water.  He would groan twitching in an agony of muscular contraction.

This trauma could go on for two weeks with the victim ignoring the horror of physical degeneration thus leading to a terrible death.

A person in such a predicament could only be saved by another “Doctor Blackfellow” whose powers were stronger than the evil one.

The family called for Gudjiwa who was a friendly Medicine-Man.  He came and performed the various rituals, which included sucking the boy’s arm near the shoulder.

In moments Gudjiwa spat out a mouthful of blood into a coolamon.  Then he sucked again and again until the coolamon was dripping with blood.  Slowly Roberts recovered. 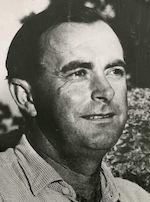 Then came initiation which meant circumcision.  A razor-blade was used without antiseptics or anaesthetics.

“Poor feller me,” he cried, in the portrayal by Lockwood (pictured).

Yet his procedure was relatively painless given that boys were usually cut with a stone!  Other initiation ceremonies ensued with the outcome being to teach resilience and self-discipline.

While all this was happening, Roberts was introduced into the white man’s world.

He went to school at the Roper River Mission where he learnt to read, write, spell and do simple arithmetic.  He was also taught the Christian religion at the mission and became a believer eventually being baptised into the Anglican Church.

Miss Dove was his first teacher.  The boys would smuggle goannas and pet pythons into the classroom and surreptitiously let them go.

The blood would drain from poor Miss Dove’s pale face as she yelled at the boys to take the animals out.  It was all for “nature study” the boys claimed.  School ended at Grade Five with Phillip turning out to be quite a good student.

It was time to return to the bush – the University of the Bush.

Phillip or Waipuldanya, his tribal name, was now to learn the art of hunting.  He was to learn how to hunt and kill with a spear both wallabies and kangaroos.

His teacher was to be Sam Ulagang, a Ngandi tribal hunter. Sam was a patient teacher, a proud tribesman and an expert tracker.

Sam was Phillip’s teacher because his sister, Nora Bindul, had been promised in marriage to Phillip according to tribal tradition.  For the next two years Philip was painstakingly taught the art of hunting in the traditional way.

When he had to carry the carcass of a sixty-pound wallaby back to camp Phillip’s back ached relentlessly.  His thirst burnt into the back of his throat.  He hungered.  He was gasping for water.  He wanted to give up. They came to the river where he drank ravenously.

Then when he came into the camp carrying his own kill Phillip became a Hunter Second Class.  Phillip learnt to balance his spears in relation to his height, his weight and the length of his arm.  When he married Phillip would take his wife and six daughters hunting and fishing at weekends, throwing off the fetters of civilisation for the tribal ways.

Leprosy had become a living curse for Aboriginal people living in Northern Australia.

It was brought to our northern shores by Asian traders from Macassar in the 1880s.  Aborigines inevitably contracted the disease, which initially went undiagnosed and untreated.  In the early 1940’s Phillip’s mother, Nora, was diagnosed with leprosy.  The ramifications were devastating.

As Phillip says, “Straightaway … she was cast out of the camp, to dwell alone all the rest of her days in a foreign land, her body stretched on the rack of physical torment and decay, incarcerated in a rocky waterless prison.”

The place was Channel Island near the coast at Darwin.  It was established in 1931 as a leper colony and remained so until 1955, when due to serious overcrowding and poor facilities it was closed.

Phillip continues: “There my mother spent her last years, perhaps reflecting on the ironic fate of a pagan woman banished by a Christian society because she incubated a disease of the civilization which she now saw for the first time.

“Her cell overlooked the city of Darwin …. We knew, as we saw her go, that she would never return … There she was kept in a stifling iron hut, a stranger among strangers who had just one thing in common: their limbs were shrinking and falling off.

“My mother was there on that hot summer day in 1942 when Japanese bombers appeared … and attacked Darwin.  She had a grandstand view of the devastation being wrought on the community which had banished her.

“A few days later she was one of 70 lepers herded by half-caste gang boss, Gregory Howard, a leper himself, to a remote spot on the mainland 30 miles from Darwin where they might be safe.

“Howard ferried them across the narrow strait in a launch, and on the fringes of the mangrove swamps built bush shelters with assistants who had only one hand or one leg or one eye.”

Howard eventually got a message to the authorities via Patrol-Officer Gordon Sweeny who with Howard took them all back to Channel Island.  When the war ended Phillip’s mother was dead.

Leprosy, measles, smallpox, tuberculosis, venereal disease, influenza were introduced ailments that devastated the Aboriginal population throughout Australia, so when Phillip was offered the opportunity to assist in the medical treatment of Aboriginal people there was no holding him back.

He needed a driver mechanic, an area where Phillip had trained skills. Doctor Langsford said that he would train Phillip about medicine and basic medical procedures.  He could do better than the “Doctor Blackfellow” business.

Phillip agreed to go and from there he never looked back.  He learnt many things from Doctor Langsford and the doctor learnt what a skilled and experienced bushman Phillip was.  The doctor paid Phillip for his services.

From this beginning Phillip became an assistant to Doctor Rayment who was conducting a mobile X-ray service with Aborigines.  He learnt how to take X-rays and read them and he was invaluable in convincing tribal Aborigines to have X-rays.

From there Phillip went on his own Medical Walkabout treating the Maung, the Walang and the Iwaija.  His main brief was to find Aborigines with leprosy. All his tribal knowledge and bush skills were vital and necessary for this undertaking, which proved to be successful.  One of the main tasks was to actually find these tribal groups.

Phillip and his family became Australian citizens in 1957.  He proved to be a successful person in two very different worlds yet his allegiance to his tribal world of the Alawa remained strong and paramount.

John P McD Smith is the chair of the St Francis’ House Project.