Photos above and below: Construction industry trainees in the APY lands. Photo bottom of page: One of the road trains carrying the workshop, classroom and staff accommodation to remote Central Australia.


UPDATE October 6
The Alice Springs News Online received the following responses to our questions from the Department of Education, Employment and Workplace Relations on October 4:-

UPDATE Sept 25
When the IS Australia-run Indigenous Employment Program (IEP) came to an end in Mimili and Amata there was nothing to do for the men, says Aileen Shannon, and so she and her partner, Tony Rodgers, in January this year founded Wiltja Constructions Pty Ltd based in Fregon, in the APY lands.
Ms Shannon is an indigenous woman who grew up in Mimili.  She previously worked as a public servant and as an aide to state and federal politicians.
Mr Rodgers, who is not indigenous, is a builder and carpenter.  He was previously engaged by Career Employment Group (CEG) as Project Manager for the extension of the IEP Program.
In response to an enquiry about the recent fate of the trainees, the Alice Springs News Online was told by the SA Department for Communities and Social Inclusion that “12 jobs for Aboriginal people were created on the APY Lands” and “10 workers who went through the training have also gained employment” through Wiltja and “four local Aboriginal workers have travelled beyond their communities for work”.
Ms Shannon says Wiltja’s objective is to employ local workers on a casual basis: “As we develop and grow we hope to provide permanent employment for Anangu who would like to have a career in the local construction industry.
“To date, we have employed 28 Anangu across three communities and anticipate this number will grow with upcoming work scheduled in Amata and Indulkana.”
At Mimili, Wiltja has so far undertaken three contracts;  the restoration of the Uniting Church (six weeks, eight Anangu employees); fencing of the single men’s quarters (two weeks), and refurbishments of the quarters (twelve weeks, four men).
A new house in Mimili  for Housing SA is also on this year’s work’s schedule for the new company, and one in Amata is likely next year.  She says Wiltja are fast approaching a starting date for the construction of a gymnasium in Fregon for which Federal Aboriginal Affairs Minister Jenny Macklin has kicked in $35,000.
Wiltja was also contracted to demolish 22 houses across four communities – Ernabella, Fregon, Mimili & Indulkana (10 weeks, 10 men),
Ms Shannon says the men working for Wiltja are welcome to find stand-ins if they are otherwise engaged – such as doing different jobs in the community or attending ceremonial business.
She says Wiltja employs local workers on a basis that allows them to retain their Centrelink payments.
She says the number of trainees in Mimili under the IS Australia project was 13, not 25.

Leaving your home town to learn a trade is a tough call for anyone, even more so if you’re an Aborigine living in a tight-knit remote community: while the bright lights may be alluring, the temptation of booze too often has catastrophic consequences.
Now a Darwin, Adelaide and Cairns based company has developed what may well be the answer: don’t take the people to the training, take the training to the people.
The firm, IS Australia, has developed hardware for the job that fits on a three-trailer road train: a classroom; a workshop equipped to teach skills including welding, concreting, block laying, painting, carpentry, tiling and plastering; and the third trailer fitted out as staff accommodation, all fully self-contained. 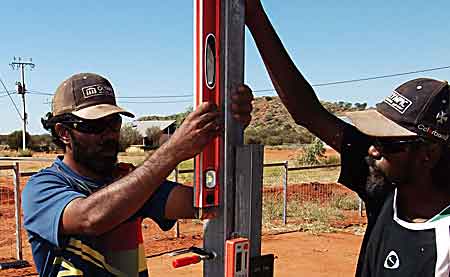 And this is the ‘software’: getting the trainees on the job, hands-on, paying them a real wage, and generating pride in the achievement of doing something very tangible for their community, namely helping to build houses.
This program goes further than the long-established Mobile Adult Learning Unit (MALU) offered by Charles Darwin University: Participants are paid workers rather than just trainees, with a full-time working week.
Under  contract with the Federal Department of Employment, Education and Workplace Relations IS Australia deployed two of their rigs to Amata and Mimili in the APY lands south of Alice Springs.
These are dry communities.
The six months program was spread over nine months in 2010 and 2011, having a break at the height of summer for Christmas and ceremonial business.
By the most significant indicator the programs were a success: attendance by the 50 participants – 25 in each community – was 90%, according to the company’s Joshua Blake.
They were employed full-time, at award rates, by the construction firm building houses in the communities for Housing SA, the South Australian government’s housing authority.
“It was not just training for the training’s sake,” says Mr Blake.
For the trainees, aged 18 to early 50s, the day stated at 7.30am with a “toolbox meeting” mapping out the day’s jobs.
These include making concrete paths, landscaping, fabricating carports and shade structures, pouring slabs.
“We got them doing things, practical activities,” says Mr Blake.
“In the morning they learned a skill and in the afternoon they were applying that on the job.”
The daily theory training may be about using a circular saw, and the trainees would be using that skill in the afternoon on the building site.
“They didn’t learn those skills in isolation.
“There was a lot of pride for these guys to be involved in a project which improved the amenity of the community. We built that! There was a real sense of ownership and pride,” says Mr Blake.
“And the broader community were proud of these guys for doing what they were doing.”
The involvement of the community was key to the program’s success, says Mr Blake: the locals made the decisions, ranging from who takes part in the course to where the trailers were parked.
The participants were mostly blokes, with some women participating in landscaping.
Older men took on a father-role: “The younger guys understood that they were given an opportunity which the older fellows had waited a long time for.”
Earlier this month IS Australia was recognised for this project as the Winner of the Workcover South Australian Collaboration Award.
[The Alice Springs News Online invited Housing SA to comment on the program. We asked what happened to the trainees after the completion of the program, and what are the employment opportunities in the region.
We also asked IS Australia what the cost of the APY contract was. We will update the story when this information is to hand.] 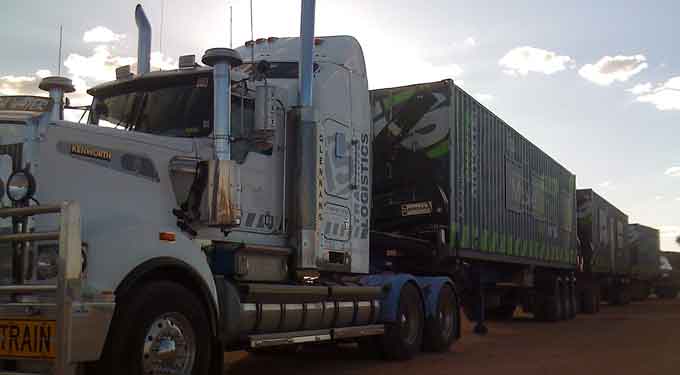 By MIKE GILLAM All photos © Mike Gillam  Our fire hoses wouldn’t reach beyond our boundary so we ran a relay of water buckets to the...
Read more
Issue 38