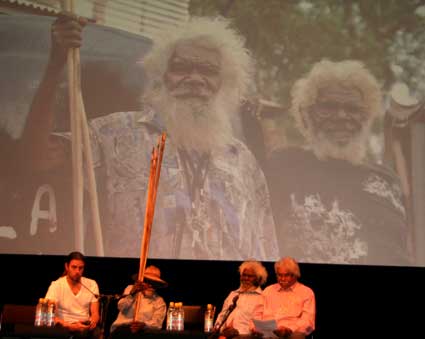 The old men from Amata stole the show. It wasn’t just their charisma but their focus – the young people of their community –  and their enquiring and imaginative outlook. Frank Young, Hector Burton and Ray Ken spoke to their ideas and work at the Desert Mob symposium on Friday (pictured at left). Willy Kaika and Barney Wangin were present in the auditorium and the men were joined on stage by a collaborator, the much younger installation artist Jonathan Jones, a Wiradjuri man from NSW.
Their work continues on from earlier projects, the fruit of which local audiences have been able to see at RAFT Artspace in two exhibitions. The men are still painting – all of them except Young have work in the Desert Mob exhibition – but they have also turned their attention to teaching their young men to make their traditional weapons, kulata (spears) and spear-throwers. 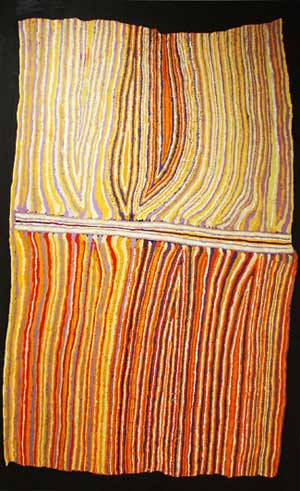 As they worked they saw “how strong and powerful” the weapons would look in their art work, said Young, director of Tjala Arts and chairman of the community, who translated for the other men. They began to imagine a room in a gallery “full of spears, thousands of spears”.  This is where Jones came in: “We knew he worked in a different way, filling a room with things,” said Young, “and we asked him for support.”

They started planning the exhibition with Jones a year ago and at the symposium showed an image of the way they are likely to proceed, with a host of spears (scores, rather thousands) suspended from the ceiling. They’ll also work with sound and lighting elements: “It won’t be still and straight like most exhibitions,” said Young, “it will be like a movie.”

The vision is clearly exciting for them but it hasn’t overshadowed the main game: “The best thing is the building of the spears, the old men training the young men, the same way it’s always been.” (Ray Ken’s Kulata, at right, is showing in the exhibition.)

There was a strong theme at the symposium of cultural maintenance and revival, coming from the art centres on the APY Lands. Mimili Maku Arts presented, with a very effective short documentary, the case for revival of their language, Yankunytjatjara. There are literally only a few speakers left, but the story is more complicated than you might think. Children at Mimili are growing up speaking Pitjantjatjara, rather than their ancestral tongue, partly because it is taught in schools and also because, as Yami Lester explained in the film, there has been a lot of inter-marriage as well as an encroachment eastwards by the Pitjantjatjara into Yankunytjatjara territory.

Lester (below, in a still from the film) relished his role as raconteur. There have been many marriages with those “good-looking Pitjantjatjara women”, he said. “We used to call them ‘the Spinifex Blondes’, he added with a delighted chuckle. He said these mixed couples are “happy together, but the government makes them very sad”. This is because the mining companies “are milking the water”.

On the Pitjantjatjara push to the east he also had a laugh, as he said the Yankunytjatjara themselves have also been moving into Arrernte territory at Finke.

The revival project is getting support from the University of Adelaide’s Mobile Language Team and work is starting on surveying, recording, documenting and analysing the language for future preservation.

Ninuku Arts, servicing the communities of Kalka and Pipalyatjara in the western APY Lands, also showed a short film, titled Manta Irititjangku – Ancient Land. Its emphasis was on the essential link between what artists are doing and their country, using the language of film to express this  – landscape fading into painting, fading into landscape. Unfortunately a few too many tricks of the trade got in the way – too many extreme close-ups, too much focus on the ‘dotting hand’ rather than on what was being painted. The transitions were also too fast, making for a series of fleeting impressions rather than a more consolidated insight. 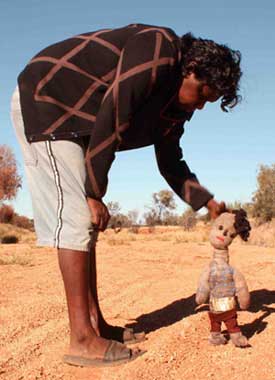 Other short films revealed that the medium is being explored at art centres for its narrative, and not only documentary, possibilities. There were some from Warlayirti’s Motika project, including a couple with a fine sense of comedy. And, in what was probably the hit film of the day, the signature “soft sculptures” by Yarrenyty Arltere Artists of the Larapinta Valley Learning Centre were deployed as the actors in the entertaining, honest and moving Little Dingi, a story jointly written by Marlene Rubuntja and Loretta Banks. The settings were in the town camp itself, with a few hand-made props, while the Alice Springs CBD was evoked by just a few bright lights in the darkness.

Dingi (at left, with Loretta Banks) is a punkish little boy, his grandmother’s favourite, but inclined to give her heartache by going into town by himself  at night. She tries to entice him to stay at home with food and toys but still he leaves, only to be brought home in the wee hours by the police. His grandfather makes the observation that Dingi’s parents have some decisions to make. We see them sitting with family, but their minds are elsewhere – thought bubbles show poker machine reels spinning … 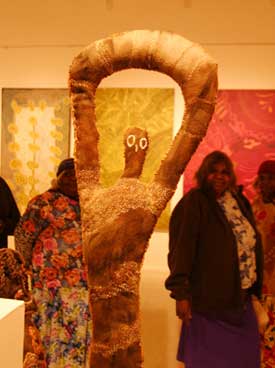 In the Desert Mob exhibition some of the Yarrenyty Arltere soft sculptures show a further evolution, away from their ‘bush toy’, folkloric character and more towards using form to express an idea. This is particularly the case with I saw me, and I was beautiful by Rhonda Sharpe (at right)  and Grandmothers can rest too, sometimes by Dulcie Sharpe. At present the medium is  dominated by women but they are pushing to persuade their men that “sewing” is open to them too, the theme of their second short film, Antanette & Tom .

Warwick Thornton, prize-winning filmmaker of Samson and Delilah, followed Yarrenyty Arltere Artists in the program and was enthusiastic about their films as well as the photographs on display in the foyer, the finalists of the Inaugural Desart Artworker Photography Prize. He made the point that not everybody can paint and that being introduced to other media can be “the spark” that some people need. He had just returned from documenta, a famous and huge exhibition held every five years in Kassel, Germany, where he had exhibited his own photographic work. He said working in photography had been a “breath of fresh air” after working in film-making, in which he feels more constrained by the rules of story-telling. Disappointingly, he did not show or further discuss his work.

Part of the rationale for the symposium program is to introduce artists – and many were in attendance, especially in the morning – to other modes of expression. The old men from Amata, with their thinking about the Kulata Tjuta (Many Spears) installation, demonstrated how fruitful this can be. So Thornton’s short speech was a missed opportunity. Reko Rennie took his up, with a well-illustrated presentation. Of Kamilaroi/Gamilaraay/Gummaroi descent, he grew up in Melbourne and his earliest mode of creative expression was graffiti art using the typical visual language of the street. He later turned his attention to his family background and history, with the spraycan becoming his “message stick” and his themes focussing on identity politics.

Expression other than through visual media was also given a nod with the choice as MC for the day of Constantina Bush (at left), an Aboriginal drag queen from the Katherine area who now lives and works in Melbourne. She was warm and funny and she can sing, but it felt a little weird to have her flashes of burlesque dropping into the desert. The message seemed to be that Aboriginal art is no one thing, it is in the hands of Aboriginal artists themselves to take it wherever it may go.

As far as the visual arts from the desert are concerned the exhibition, which opened to the usual fanfare and excitement in the evening, appeared to be an expression of undiminished commitment to (mostly) painting by the artists and their art centres, whatever the pressures arising from the contracting art market. The number of large canvasses confidently and at times wonderfully handled was notable. The ascendancy of the artists from the APY Lands continues, with assertive showings of large works from many of them. 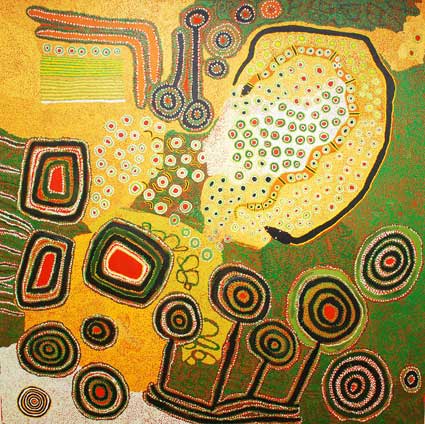 From Tjungu Palya, Araluen acquired Husband and wife story (at right), painted by husband and wife, Ginger and Iyawi Wikilyiri. It would seem to recount a long and varied life, its disparate elements holding together almost miraculously in an arcing movement around the two square metre canvas.

Martumili Artists, whose art centre is located in Newman, WA also have an impressive showing, including a major, three metre high work, Yulpu (below), by the recently deceased Pinyyirr Patterson, acquired by a national institution. The scale of this work suggests that it concerns a big sweep of country, whether in space or time or both. The clarity of the imagery shows an artist who knew exactly what she was doing, where she was going – drawing the rich traditions of the past into the now, navigating a way into the future.