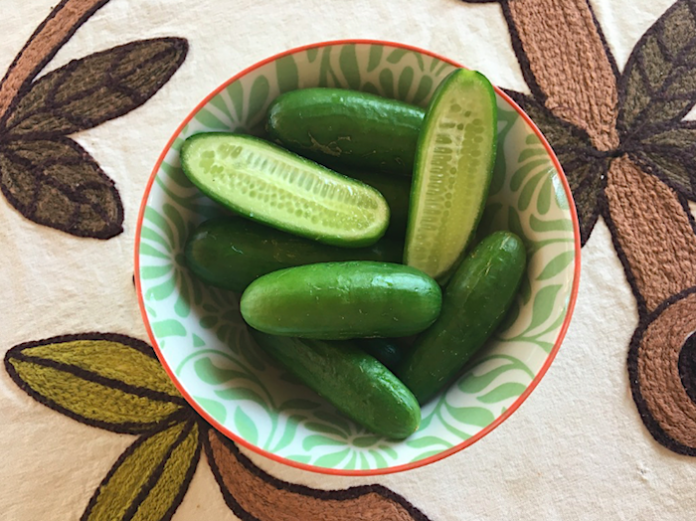 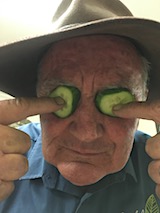 Cucumbers are easy to grow and by planting now you are likely to be rewarded with a large continuous crop of a most versatile vegetable.

Cucumbers are a warm season vine crop that will thrive when planted now and you will be picking your first cucumbers well before Christmas. You can sow seed direct or you can plant seedlings.

Cucumbers are an interesting vegetable to grow as they have so many uses.

Cucumbers contain many of the vitamins you need every day: Vitamin B1, B2, B3, B5, B6, Folic Acid, Vitamin C, Calcium, Iron, Magnesium, Phosphorus, Potassium and Zinc.

Traditionally I have planted cucumbers in a raised circle with a depression or well in the middle to promote a good deep watering.

Alternatively they can be planted in a row along a  trellis as this method will save on space and reward you with cleaner more rounded fruit that is less likely to be affected by pest and some diseases.

I usually double plant seed in the first instance as they can be suspect to “damping off” before poking their heads above the ground. To eliminate seed rotting I like to dust them with a fungicide prior to planting.

If all seeds pop up I thin each mound back to three plants and as they grow I move the tendrils around in a circle around the mound. This tends to save on space and will promote better pollination.

If growing on a trellis initially you will need to tie the tendrils up onto the trellis however as the vines mature they will start to produce tendrils that will themselves wind around the trellis frame unaided.

Most cucumbers will commence flowering after five to seven weeks and you should be harvesting from eight to 12 weeks depending on growing conditions.

Of the long green cucumbers, Burpless, Lebanese and Continental are the most popular while I still love the round Crystal Apple cucumber with its cream to white smooth skin. Last year we were eating apple cucumbers within eight weeks of planting seedlings.

Two problems with cucumber are mildews and pollination. Burpless are tolerant generally of downy and powdery mildew. If mildews are a problem spray with a copper based fungicide to manage the disease, left unchecked the foliage will be affected and slowly the plants will die.

Alternatively you can spray with a potassium based spray or you can try tree parts full cream milk to seven parts water, an easy totally organic management tool. Don’t forget to add a few drops of dishwashing detergent as this will improve stickability.

Cucumbers can sometimes have only male or female flowers thus its best to ensure you have several plants growing together. This is particularly true for the Burpless varieties. Failure to set fruit is largely the result of cold weather (not likely now) or the absence of pollinating bees and other beneficial insects.

Cucumbers are truly versatile fruits, not only are they great for you to eat they also have many other household uses.

Feeling tired in the afternoon, put down the caffeinated soda and pick up a cucumber as they are a good source of vitamin B and carbohydrates that can provide that quick pick-me-up that can last for hours.

Tired of your bathroom mirror fogging up after a shower, try rubbing a cucumber slice along the mirror, it will eliminate the fog and provide a soothing, spa-like fragrance.

Are grubs and slugs ruining your planting beds then place a few slices in a small pie tin and your garden will be free of pests all season long.

The chemicals in the cucumber react with the aluminum to give off a scent undetectable to humans but drive garden pests crazy and make them flee the area.

Looking for a fast and easy way to remove cellulite before going out or to the pool?

Try rubbing a slice or two of cucumbers along your problem area for a few minutes, the phytochemicals in the cucumber cause the collagen in your skin to tighten, firming up the outer layer and reducing the visibility of cellulite.

Works great on wrinkles, too!

Want to avoid a hangover or a terrible headache?

Eat a few cucumber slices before going to bed and wake up refreshed and headache free.

Cucumbers contain enough sugar, vitamin B and electrolytes to replenish essential nutrients the body lost, keeping everything in equilibrium, avoiding both a hangover and headache!!

Looking to fight off that afternoon or evening snacking binge? Cucumbers have been used for centuries and often used by European trappers, traders and explorers for quick meals to thwart off starvation.

Have an important meeting or job interview and you realise that you don’t have enough time to polish your shoes?

Rub a freshly cut cucumber over the shoe, its chemicals will provide a quick and durable shine that not only looks great but also repels water.

Out of WD 40 and need to fix a squeaky hinge? Take a cucumber slice and rub it along  the problematic hinge, and voila, the squeak is gone!

Stressed out and don’t have time for massage, facial or visit to the spa?

Cut up an entire cucumber and place it in a boiling pot of water.

The chemicals and nutrients from the cucumber with react with the boiling water and be released in the steam, creating a soothing, relaxing aroma that has been shown to reduce stress in new mothers and college students during final exams.

Just finished a business lunch and realise you don’t have gum or mints? Take a slice of cucumber and press it to the roof of your mouth with your tongue for 30 seconds to eliminate bad breath, the phytochemcials will kill the bacteria in your mouth responsible for causing bad breath.

Looking for a “green” way to clean your faucets, sinks or stainless steel?

Take a slice of cucumber and rub it on the surface you want to clean. Not only will it remove years of tarnish and bring back the shine, but it won’t leave streaks and won’t harm your fingers or fingernails while you clean.

As I was saying, not only are cucumbers good for you they are oh so versatile.