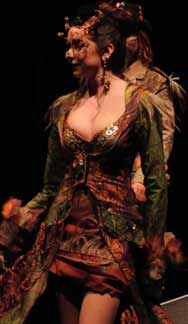 Though the veteran designers of the Alice Desert Festival’s Wearable Arts Awards have all but bowed out, the arts and the show live on. Certain names are now establishing themselves as ones to watch out for  – such as Simone Kilian and Tina Tilhard – while names associated with different roles – such as Jen Standish-White and Mary Menotti – have emerged to reveal unsuspected talent. Edginess, provocation and humour were not to the fore this year, but refined skills were – in design, execution and performance. Many models did much more than strut – some expressed moments of intense drama and emotion, others revelled in the sensual experience of the adorned body and pulsating music.
Collaboration
Standish-White has sponsored the Youth Award (for secondary students) for years. On the weekend her creation, a collaboration with Batchelor Institute art lecturers Brigida Stewart and Amanda McMillan with their students Betty Conway and Molly Napurrula Martin, won in its category (for two or more designers), took out the People’s Choice award, and won the acquisition award.
Wonderfully detailed, Desert Steampunk (at right and below) used screen-printed fabric of intricate designs in greens, golds and rust (the contribution of Conway and Martin) for flattering, well-constructed and beautifully embellished garments, inspired by science fiction and neo-Victorian aesthetics. Its particular achievement was to make at the same time a high impact image by having two models, a good-looking man and woman (Jimmy Cocking and Allanah Jansons), and designing a sexy performance for them. The “Ooooh!” that Cocking got when he took his jacket off hit the highest register on the people meter on Saturday night and in general the audience just loved the gorgeous sexy vibe these two put out. 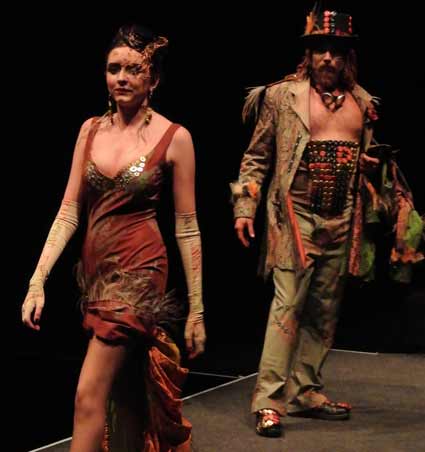 Simone Kilian had entries in four categories and demonstrated her eye for form, with Sails in the Sand; a sense of humour, with her headpiece, Coffee Anyone?; and decorative as well as technical skill in Angled. All these entries were supported by strong performances.
Extraordinary possibilities
Tina Tilhard can see extraordinary possibilities in the most mundane of household objects. Last year it was mousetraps, this year teabags, right down to their strings which were used to make the bodice of a costume inspired by the curves of a teapot and perhaps the steam off the tea’s surface. The serpentine moves of Sally Balfour as the Tealirious Sirena reflected the inspiration beautifully and helped clinch top prize for the entry in the New World Sustainability Award.
Gentle humour was in evidence in the runner up in this category, Alex Stephens’ It’s in the Bag. The performance was a well-timed double act, with the fabulously tall Stephens  trying to deal with an unusually weighty bustle, which turned out to be concealing the smaller Kira Stephens. And never has the ubiquitous green shopping bag looked so good, artfully scrunched to form the flounces and the elaborate bustle.
A simple and moving performance by Courtney Summers set off a beautifully crafted costume by Leonie Oakes, one of a number of interstate entries this year.  Titled Beneath the Surface, it was inspired by the ocean and its creatures and took out the Natural Fibre Award.
Primal experience
The Top Notch Award was a strongly contested category, the only one in which we saw a veteran entry, Philomena Hali offering a wonderfully mobile silk organza creation, Hot Head. 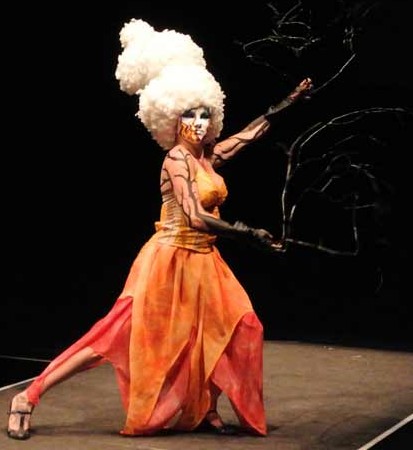 A collaborative effort from Mary Mennotti (concept) and Henry Smith (creation) won the category and was one of the performance high points of the evening. Menotti, supported by two male dancers, Dominic Fallini and Matthew Leyland, managed to really summon the s
ubtitle of the piece – A Primal Experience. Wearing the headpiece, she embodied the Aquila Marirosa of the title, an eagle or perhaps an imaginary powerful bird, emerging from the darkness, lifting into flight, settling with its great wings and scouring the horizon for food or threat.
It’s always interesting to see what current events and ideas get picked up by designers. Last year’s bushfires in The Centre inspired one of the strongest entries of the evening, in both design and performance. With Deliberately Lit (at left), Clare Whitcombe undertook both roles to excellent effect and got top prize in the Fantasia Award. Gay marriage also popped up its head in the Youth category, with The Wedding by Suzi Nitschke. The wearable aspect was pretty straightforward, but the performance by Nitschke herself with Clare Thomas gave the entry its impact.
The Youth category was won by Erika Hamilton in a delightfully adolescent outfit and performance inspired by Popping Popcorn. Teen spirit was also manifest in the post-interval performance by the Duprada Dance Company. The three male dancers contributed enough of a gender balance and the choreographic emphasis on the whole group moving more or less as one made this a really successful expression of teenage energy and focus.

Below: Co-runners up in the Fantasia Award, The Lady of the lake (designer Sarah Hill, model Dacqmar Guascoine) and Angled (designer Simone ) Kilian, model Jasmine Ahwah).