Sun, smoke and dust all part of the bush flavour 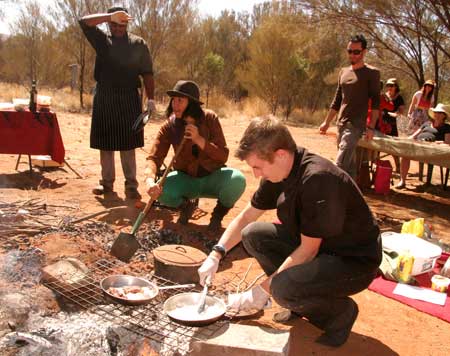 Crocodile meat and bush tomato were the “mystery” ingredients. Sun, smoke and dust went without saying.
The third annual Bushfoods “iron chef” competition was held last Sunday, at the Quandong Farm in Ilparpa Valley, where picnickers were welcomed by the Scales family. It was a somewhat challenging induction into cooking on an open fire for UK chef Chris Messenger, who’d never done it before. Suren Perera had, but often looked like he was longing for the cool stainless steel of his kitchen at the Barra on Todd.
They were both commended by judge Bec Gooderham, a former organiser of the competition, for doing “an amazing job” in the conditions. Her fellow judges Lisa Perry (Reality Bites) and Raelene Brown (Kungkas Can Cook), both experienced chefs,  commented on the difficulties of cooking with crocodile meat as well as cooking over a fire or in a camp oven. “Regulating the heat is a challenge,” said Brown, “it depends on the wood you use.” 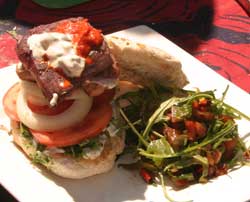 Messenger’s first step in dealing with the croc was to take a mallet to it. He then grilled it to make a croc burger, topped with a roasted capsicum and bush tomato tapenade, and served on damper flavoured with bush tomato, cooked in foil over the hot coals.
He also served a camel curry. Brown appreciated its combination of chilli and bush tomato, although Gooderham felt that the chilli was too dominant.
Perera sliced the croc into thin strips, marinated with bush tomato, lemon myrtle and tomatoes and served it as a warm salad. He also cooked a croc mains, flavoured with lemon myrtle and bush limes which gave it “quite a punchy flavour”, according to Perry.
Apart from presentation – “beautiful” in both cases – and flavour generally, the judges were particularly looking for a bushfoods taste and Messenger’s bush tomato damper gave him the edge to win the comp. 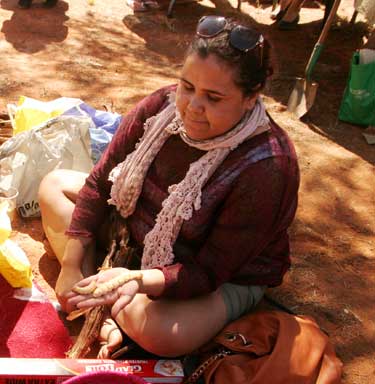 While the chefs were sweating it out, the Scales family were doing a side line in witchetty grubs, damper and ‘roo tails. The grubs had been harvested on the block and were roasted on soft sand under a dusting of hot coals. A Canadian couple amongst the on-lookers were persuaded to have a taste: “Actually not bad!” said Lye Lang. They are recent arrivals, Scott Lang having a two year contract at the hospital. They were delighted by the laid back small gathering, the bush atmosphere and their introduction to foods of the desert.
There was more to follow from the ever-inventive domestic cooks in the second heat of their competition. They love their word plays: judges were treated to “Bush-chetta”, Joy Woods’ lemon myrtle flavoured pumpkin spread on crusty damper; and “Quabbit”, David Woods’ slow-cooked wild rabbit (which he’d caught himself) in a quandong sauce. Franca Barraclough kept it simple, serving a ratatouille with bush tomatoes and Warrigal greens. All were delicious and “would sit nicely on a menu anywhere”, said Lisa Perry.
However, seasoned competitors Michael La Flamme and Pamela Keil stole the show with their Bush Benedict. This consisted of a poached omelette flavoured with saltbush leaves and native peper, topped with a bush Hollandaise sauce using native passionfruit, lemon myrtle, and bush raisin, served on a ‘roo tail sausage spiced with native pepper and anise myrtle, and a wattleseed muffin. As a palate cleanser, they had also made a ‘roo tail aspic.
“Oooh !” “Mmm!” The judges were almost speechless in their enjoyment. 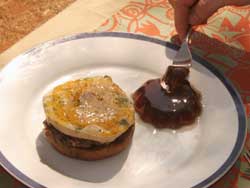 After a while Perry commented that the aspic was “one of the best things I’ve tasted in a long time”.
Brown commended them for their “perfect” bread once again and described the entry as a “true bush breakfast”.
There were also two entries in the sweets category: Barraclough had used Burdekin plums from Magnetic Island to make a crumble with a wattleseed and buckwheat topping, while Sue Woods had produced petits fours and chocolate drops with a bush tomato surprise inside. The judges particularly liked the latter and gave her the prize.
Now heat winners go forward to the final which will be held in conjunction with the Bushfoods Gala Dinner on October 10 – plenty of time to dream up new combinations to wow the taste buds.
Entries in the competition have dropped away in comparison with earlier years, which suggests that the Alice Desert Festival needs to do more and timelier groundwork in the lead-up to keep this as one of the festival favourites.