The many lives of stuff in Alice Springs

I have always loved pre-loved stuff and as a teenager I think I had the cream of the crop of stuff from deceased estates getting put back into circulation. Nice stuff, real stuff made out of really nice materials, from clothes to lamps and bits of furniture. All somehow original in their pre-worn or used character. Nowadays I feel like you’re lucky to get your hands on some vintage Target or IKEA. It does happen though and then it is a quintessentially Alice Springs experience to also bump into the item’s previous owner.
This is OK with me. In fact, one of the first things that I discovered with delight about Alice was the versatility of ‘used’ goods and the creativity and resourcefulness of handy types, particularly heightened in a town situated even further away than usual from the manufacturing place of an item.
What I can’t stand is mass-produced new stuff. Like the time my mum came to visit and bought me a dress from one of the clothing stores in town, a nice dress, nice fabric and cut, and not expensive. Anyway seems at least three other ladies shared that opinion as well as a lad whom I also spotted sporting the said frock. I have since locked the frock away until it becomes vintage or retro or whatever or everybody else has lost theirs or worn it out! 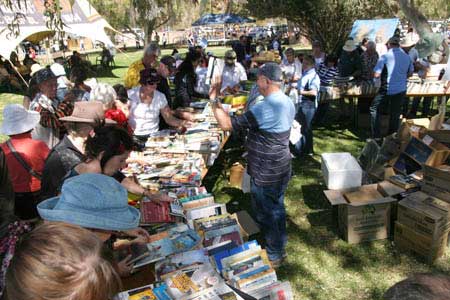 It’s a funny place Alice what with all this reincarnated stuff, not to mention the uncanny lack of a degree of separation with all the connections crisscrossing the continent only to meet in Alice Springs. “Oh you know so and so?”
“I grew up with him next door!”
“Yeah well, his sister is here in Alice.”
“No way!”
A brief interaction I overheard the other day between a couple of strangers waiting for takeaway coffee: “Did you get that at the clothes swap?” Eyeing up the woman beside her.
“Yes I did!” Stretching the fabric out between them to admire.
“Yeah, I loved that jumper! It used to be mine!”
Last year I found a beautiful though slightly broken lamp on the side of the road. This year, using it at a festival coffee stall, a little girl couldn’t help pulling her mum by the hand and with round eyes she asked me where I had got it. The mother interjected knowingly, “on the side of the road”, outside their house! I just loved the little girl’s wonder at these happenings.
At the same festival I sat next to a guy on a couch who looked at me and with a wide smile said, “I’m so happy to be sitting on this couch, I love this couch…” and, though he could have also been blissed out for other reasons, he happily recounted that he had bought the couch seven years previously and had left it to his old housemates when he left town. He too had round eyes at the fact that his couch had come to meet him at the festival, for old times’ sake, he supposed.
I get to thinking about all this stuff most afternoons as I walk home after work and look at a pair of sneakers strung up across a power line. And most afternoons I wonder about the person to whom they belonged and if they also look up at them on their way home from work most afternoons …

A man who ran a COVID control point was stopped by police with tyre deflation devices 20 km west of Katherine on the Victoria...
Read more
Issue 30

Sir – I've been researching NT football history for many years and I continue to do so. I have just commented on one of...
Read more