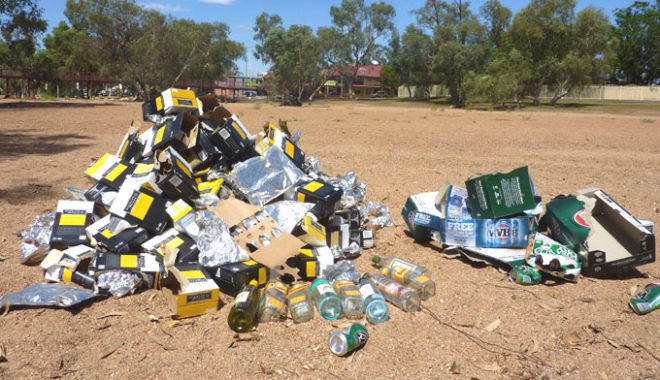 The morning after, Alice Springs style: a mountain of wine casks in the dry Todd River, collected within just 200 metres of the footbridge (top left in the photo), put on display by the local alcohol control pressure group, People’s Alcohol Action Coalition (PAAC).
The group wants a “floor price” for alcohol pegged at the cost of the cheapest full strength beer, $1.20 per standard drink.
The booze sold by the Todd Tavern bottle shop (in the background of the photo), on the banks of the Todd, in these Renmano wine casks works out at 71 cents per drink, according to PAAC spokesman John Boffa.
But the manager of the Todd Tavern, Leonie Leach, says the correct price per standard drink for the Renmano cask wine is 90 cents.
Only the Todd Tavern and the Gapview Hotel are selling cheap cask wine. All other outlets in the town have voluntarily withdrawn the product from sale.
Alcohol restrictions are a major issue for the upcoming local government and legislative assembly elections.
Says Dr Boffa: “The Gapview also currently stocks four types of cheap McWilliams Sherry  and a McWilliams Port.
“The sherry is 81 cents a standard  drink, and the port is 90 cents.
“The two pubs, unlike the supermarkets,  are allowed to trade on Sundays.”
PAAC says in supermarkets cask and fortified wine, maximum one litre, generally 750 ml bottles only, are sold one per person per day and not before 6pm.
Dr. Boffa appeared before the Senate Community Affairs Committee in Alice Springs today. His submission (number 253) also argues for “a take-away alcohol-free day preferably tied to a set welfare benefits payment day, but in any event to have one day a week on which take-away alcohol is not sold”.
The Alice Springs News Online has offered a right of reply to the Todd Tavern and the Gapview Hotel.

THIS POLICE MEDIA RELEASE, an addition, for good measure to yesterday’s story:-
A woman will face multiple charges after police allegedly found her drink driving and driving whilst disqualified while she had a two-day-old baby and a two-year-old child unrestrained in the back seat.
Alice Springs Sergeant Conan Robertson said Northern Territory Police continue to save people from themselves.
“The likely result of these circumstances was a serious crash,” Sergeant Robertson said.
Sergeant Robertson said the 20-year-old woman was pulled over for a random breath test at around 1pm today.
“The woman, who was disqualified from driving, returned a positive result and was arrested for a breath analysis at the Alice Springs Police Station where she was found to have a breath alcohol level of 0.167 per cent.
“If this isn’t bad enough, this offender was also on bail for another matter, one of the conditions being that she is not to consume alcohol.”
Sergeant Robertson said the two day old baby was being held by a rear seat passenger while the two-year-old was also in the back seat, unrestrained, along with another adult.
“The two day old baby does not even have a name yet and her life was in the hands of a 20-year-old drunken, disqualified driver,” Sgt Roberson said.
“Luckily we were there to protect this little girl.”

THURSDAY, FEBRUARY 23: Media release from Opposition Leader, Terry Mills:
Despite introducing laws that mean anybody who buys alcohol must produce a driver’s license, Labor’s grog bans have seen no decrease in violent assaults in the Northern Territory.
The Chief Minister is conning Territorians that his grog bans are having a significant impact on alcohol-related crime.
In July to December 2010 there were 3373 violent assaults in the Northern Territory. A year later there were 3384.
During today’s Question Time, the Chief Minister repeatedly refused to answer my question about the number of assaults in the Territory for the September and December quarters last year.
The reason for this refusal became evident with the release of the Alcohol Reform Report from July to December 2011 which showed the lack of improvement in levels of violent crime.