Home Issue 47 Revitalisation: will there be people as well as cars in the mall?
Issue 47Volume 18

Revitalisation: will there be people as well as cars in the mall? 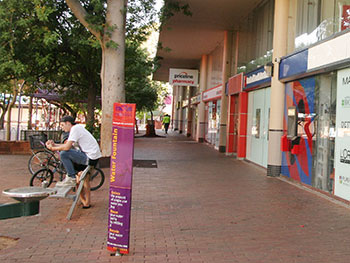 The revitalisation of the CBD is about a lot more than the opening of the northern end of the Todd Mall to traffic … but what exactly?
That people, including the media, find it difficult to say reflects the absence of any kind of everyday imagining about what it could and should mean. When the Town Council last Monday formally voted that it would proceed to spend the NT Government’s $5m allocation on the recommended works for the northern end of the mall and for Parsons Street, they did so without a murmur. That brought to a conclusion a process during which the council, who are the trustees of the mall, have really never been heard on the subject of its revitalisation.
All along Mayor Damien Ryan was the co-chair (with Minister for Central Australia Karl Hampton) of a steering committee involved in the planning. Whenever the Alice Springs News Online asked for a comment on where the process was at, Mayor Ryan said it was for the Minister to say – not his follow co-chair, but Planning Minister Gerry McCarthy.
When there was finally, right at the end of the process, a public meeting to present the projects developed by the design consultants, the Mayor was away on other business. The meeting was chaired by Deputy Mayor Liz Martin, who did make a few comments, but they fell short of expressing a ‘vision’ – an over-used word but nonetheless a necessary concept when it comes to thinking about and deciding where we, collectively, want to go.
There was no doubt plenty said behind closed doors at council, whether amongst officers, elected members, or both. But the public has not been privy, and despite the many individual and group consultations carried out by the design team and the volumes of documentation made available, there remains a feeling that, yes, some works are going to be undertaken but … what will it all mean? How will we start living differently in our town centre, feeling differently about it?
There’ll be traffic, a decluttered public space, some new, and hopefully inspiring design features, including trees and … where will the people be, what will they be doing, how will they be feeling?
Only four people responded to the request for public comment on the proposed projects (which were virtually a fait accompli). One of them, Anne Scherer, put her finger on it when she quoted Bob Millington, then president of the National Trust in Alice, on his vision for  the Hartley Street Heritage Precinct. His comments were presented in the Advocate of 4 March 1987:
‘It’s a warm sunny morning in Alice Springs in 2039. Tourists tumble out of a bus and head for the green embrace of the Hartley Street Tea Rooms. After billy tea and damper or cool refreshment they explore the 100 year old house. Besides the tearooms, the house has an historical display and shop with an early style post office agency, thought to be a fair replica of the town’s first post office.
“Tourists find the all in one complex convenient – they can buy, write on, then post postcards while having a rest and a drink. Elsewhere in this leafy area of old Alice, there are houses converted to craft shops, museums, restaurants and a combined Aboriginal organizations information centre.”
Said Ms Scherer, who had read widely, even exhaustively, the revitalisation documentation: “I quote this not for the content but it is a good example of what I think is needed in the current ‘Revitalisation’ conversation. What is the actual vision for Todd Street / Parsons Street / Snow Kenna Park etc? Exactly who do the planners envisage will frequent these locations and what will they actually be doing?
“This is quite a different thing from ‘picturing’ bricks and mortar and landscaping, and different again from talk such as, for example, ‘the scope the proposed meeting place offers to incubate new cultural facilities of great merit and income-generating potential’.”
Could any of the aldermen answer her questions? And now that they have managed to run through a three year process in almost complete silence in the public domain, we will probably never know.
Once we get past the summer holidays there’ll be a local government election just a couple of months away. Some aldermen will not be standing again, which opens the door for newcomers. There’ll also be a new voting system in place – proportional representation – about which the current council is (in the majority) quite upset. The new system is supposed to be a fairer one for places where there is social diversity, giving a more diverse range of candidates a greater chance of success. Let’s hope some dynamic people – who have some big picture vision and are able to articulate it – put their hands up. Whatever the outcome, one thing that the community should demand of council is a more open, ongoing conversation.

An explanation of the way ‘proportional representation’ works as opposed to ‘exhaustive preferential’ – the system used for local government elections up till now –  can be found in ‘Why some will never get elected’. Google the term for other articles on our site.