Did they go too far? 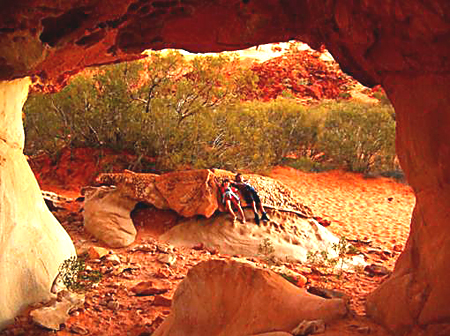 “There’s nothing like totally exhausting yourself whilst exploring the eerily beautiful landscape of Rainbow Valley Conservation Reserve in the Northern Territory.”
So says Linda Collis, from Redlynch, QLD, who with this snap (at right) won the competition “There’s nothing like Australia” run by the Federal Government’s Tourism Australia.
Trouble is, she and her mates in the photo are in breach of the regulations for visiting Rainbow Valley.
They seem to be off the short marked trail to which people are restricted.
However, the Department of Natural Resources said today (Nov 9): “They do not appear to have breached the regulations in this photograph.
“This area is considered to be a part of the public area adjacent to the walking track, where visitors are allowed to go.”
But the photo below shows a visitor snapped by our reporter two years ago, at what seems clearly the end of the path.
“Mushroom Rock. Please return along same track,” says the sign.
The restrictions resulted from the transfer of ownership of this park and most others in the Centre to Aboriginal people, an NT Government decision.
Parks NT, which manages the reserve, says fighting buffel grass is one of the reasons for the drastic access limitations. The only way Ms Collins could get “totally exhausted” on that short path is carrying a very heavy weight and running backwards and forwards.
Tourism Australia Managing Director Andrew McEvoy does have a point when he describes the campaign’s objective as Australians “promoting what is special and unique about their country last year to the rest of the world”. Not many countries would restrict access to some 90% of a national park to a minority of Indigenous people. Sign below: “Wurre” is the Aboriginal name for Rainbow Valley. 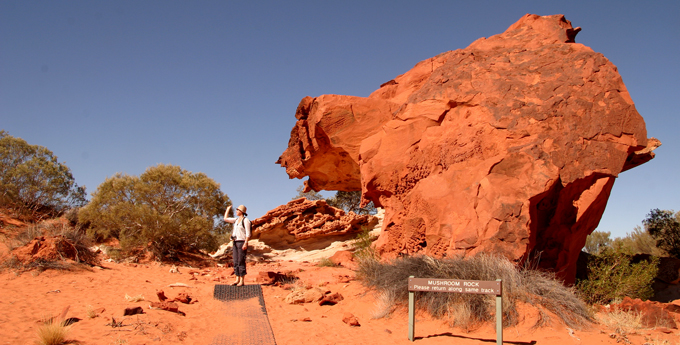 Facebook
Twitter
Pinterest
WhatsApp
Previous articleMother's assault on toddler not what it seemed
Next articleLETTERS: Dr Boffa honoured. Offer in Todd Mall: Want a girl? How many generations, Steve? And the bicycle track's missing link.