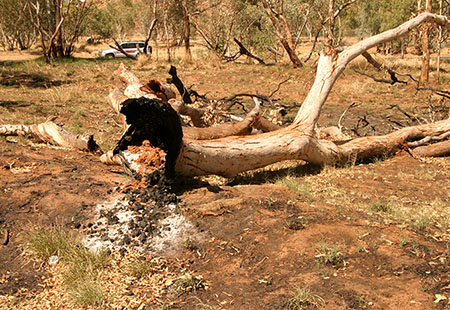 It doesn’t take much for buffel grass and couch to get going again even after a fire has been through. Our photo shows a devastated burnt tree in the Todd River – there are many along the town stretch of the river – with buffel and couch regrowing (and setting seed) following recent light rain. How soon will we – and surviving trees –  lose the fire-break benefit of recent burns, whether controlled or otherwise?
The Alice Springs News Online asked the Department of Resources about what rate of grass regeneration we can expect in the large areas of burnt country in and around Alice Springs, given that a weak La Nina event is predicted for the summer.
We received the following statement:-

History shows us that periods of exceptional pasture growth followed by a big fire season only come around every now and again or on average every 20-30 years.  Such occasions are often etched into our memories, whether we have heard the associated stories from the old timers or experienced such an event. Periods of exceptional pasture growth occurred in the 1920s, 1950s, 1973-75 and more recently 2000-02.
In 2010/11 Central Australia received one of its best growth events on record, and in many areas pasture growth has been the best in living memory. Consistent yields of over 4000kg/ha have been estimated over much of Central Australia with little variation in quantity due to different vegetation types. Fire generally only requires 1200kg/ha to carry. This has resulted in very few natural breaks across the landscape in which to stop a fire once started, and the reason why we are experiencing that large areas of country are being burnt from a single fire.
Apart from the loss of watering facilities, short-term fodder loss from wildfires has the greatest impact on the pastoral industry. Factors that influence the rate of pasture growth are numerous and include:
• soil moisture
• rainfall
• temperature
• vegetation type
• soil type
• pasture health
• fire intensity
Water is the greatest influence on pasture growth. Central Australia however has an extremely variable climate making it very difficult to predict rainfall. It may take many months or even years for pasture to recover adequately to provide fodder for stock unless there is adequate existing soil moisture or rainfall is received.
Recovery for pastures in poor health or that have been exposed to a high intensity fire may take longer than pastures in good health or that have been exposed to lower intensity fires.  In particular, perennial plants (eg Kangaroo Grass [Themeda triandra], Curly Windmill Grass [Enteropogon acicularis] or Buffel Grass [Cenchrus ciliaris]) will respond quicker from their root reserves than annual plants (eg Bunched Kerosene Grass [Aristida contorta], Button Grass [Dactyloctenium radulans] or Flinders Grass [Iseilema spp.] that need to germinate from seed.
Areas around Alice Springs that have experienced cool, patchy fires in August and September are already beginning to green-up with fresh pasture. This growth is predominantly from the root reserves of the perennial grasses that can appear within approximately three weeks following adequate rainfall. The growth from these fires has been enhanced due to the presence of existing soil moisture from early rain prior to the fires. Small amounts of rainfall received recently will enhance this growth. The annual grasses in these areas may require additional rain to stimulate germination from seed stock and may take up to six weeks to emerge following adequate rainfall, before useful forage is produced.