Creating tangible consequences for juvenile offenders, picking up the ball Labor has dropped on tourism promotion, and defining how the current government's mammoth deficit can be reduced without affecting vital services, that's what will keep the Country Liberals on the hop between now and the elections in a year's time, says the party's president, Ron Kelly (pictured). He spoke with Alice Springs News editor ERWIN CHLANDA.

Opposition leader will not be questioned on looming NT poll

Opposition Leader Gary Higgins (at left), in a media handout, "has vowed to offer Territorians a 'real alternative' in 12 months’ time" but he won't discuss it. Party president Ron Kelly has agreed to an interview with News editor ERWIN CHLANDA.

UPDATE August 26: Mr Higgins has now offered to make time for an interview with the News. However, as we had already made arrangements to interview party president Ron Kelly, we thanked Mr Higgins and advised we would take up his offer in the near future.

With a foot in each camp, Namatjira candidate Heidi Williams wants all kids to have a chance. She spoke with ERWIN CHLANDA.

Anderson not losing sleep over dismissal from CLP 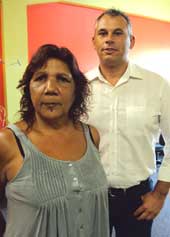 Rebel Parliamentarian Alison Anderson expects to be dismissed from the Alice Springs branch of the CLP but she says she will wear this as a badge of honour for someone whose main focus is representing her electorate. ERWIN CHLANDA reports. PHOTO: Ms Anderson and Mr Giles in more harmonious days.

As the nation turned its back on Labor, Warren Snowdon held Lingiari – how come? Has there been a convincing emphasis, in the CLP campaign, on the opportunities of leasing Aboriginal land? And does the Alice Springs Country Liberals branch need new blood? These were some issues raised by ERWIN CHLANDA with the president of the Country Liberals, Darwin architect Ross Connolly (pictured). 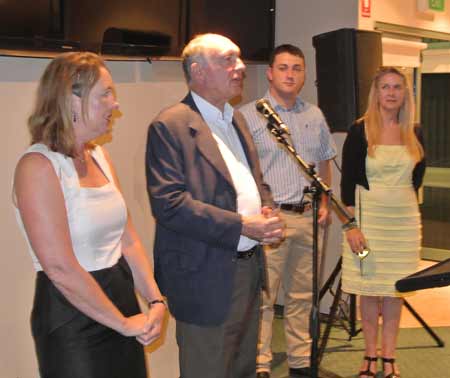 While pollies across the nation mostly look, talk and walk like one another, the candidates for the two major parties in Lingiari couldn't be more different. ERWIN CHLANDA spoke with the Country Liberals' Tina MacFarlane at drinks and nibbles when she (at left in the photo) received encouragement from Nationals Leader Warren Truss (at the microphone). So synonymous is the sitting Member with the sprawling seat after 25 years in Canberra, that branch president Daniel Davis (next to Mr Truss) wound up the evening by saying: "I'd like to thank Warren Snowdon very much for being here tonight." It brought the house down.

(Jenny Lillis is at the far right of the photo.)

The Alice Springs contingent at the Country Liberals' annual general meeting on the weekend.

The mood was celebratory, to put it mildly, at the annual meeting of the Country Liberals (most people still call them CLP): Lots of smiles. Lots of banter in the Convention Center's foyer where the 100 or so delegates and members from all over the NT mingled between sessions.

You could see it was the party that had just captured the Treasury benches, spending around five thousand million dollars a year, after a decade in the wilderness. ERWIN CHLANDA reports.

Black power: voices from the bush have made themselves heard 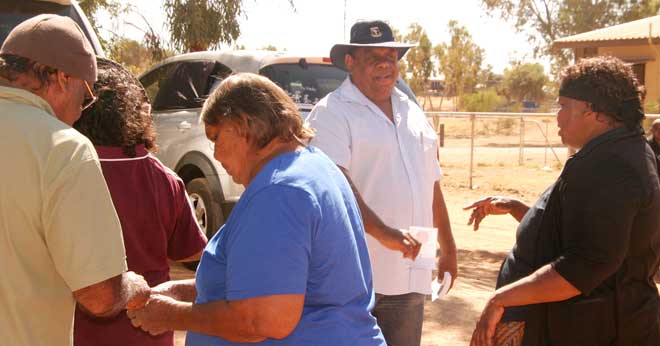 Ken Lechleitner on polling day, campaigning for Warren H. Williams (back to the camera) in Hermannsburg.

The Darwin-focussed politics of successive Territory governments has finally got the challenge it deserved and it came from the black vote in the bush. Credit has to go to the Country Liberals' significant work in communicating with bush electorates and fielding credible candidates with strong local roots – this transformation of the Country Liberals is one of the major changes wrought by Labor's 11 years in power. But the performance of the First Nations Political Party, particularly in the electorate of Stuart, suggests a broader politicisation of Aboriginal people, no longer happy to have other voices speaking for them.

The challenge for the Country Liberals government will now be to respond to their new support base, honouring their campaign promises. The challenge for the First Nations Political Party is to remain active, develop its thinking beyond the broad brush, and identify future credible candidates. On polling day at Hermannsburg KIERAN FINNANE spoke to Ken Lechleitner about the party's future.

Convincing win for Country Liberals: ALP likely to lose its only seat in The Centre

The Country Liberals party has won a convincing victory in yesterday's Territory elections, ending an 11 year rule by Labor.

The ABC says the party is likely to have 15 seats, with nine for Labor and one in dependent.

The change was mostly in the bush – previously supporting Labor.

In the huge electorate electorate of Stuart, the CL's Bess Price (1004) is likely to unseat Karl Hampton (892) with First Nations Political Party candidate Maurie Ryan on 394 votes. Preferences will decide.

Ms Price said this morning that Mr Ryan had directed his preferences in Stuart to her, although elsewhere First Nations preferenced Labor.

She is confident to have won the seat and is overjoyed about the result: "It hasn't really hit me yet that I will be part of the team that governs the Territory.

"Today I'll be with my family, rejoicing, relaxing and preparing myself."

In Central Australia's other huge bush seat, Namatjira, the indomitable Alison Anderson was re-elected as a conservative candidate in the electorate which she had first won for the Labor Party.
By this morning's figures she had 1690 primary votes, more than double her Labor opponent's Des Rogers (740).
The CL's Robyn Lambley, Adam Giles and Matt Conlan comfortably retained the three urban seats in Alice Springs.

Voter turnout in both rural seats was poor – just over 50% on current figures, with absent, early, postal and declaration votes yet to be counted.
PHOTO: Party supporters for the CL (left in the picture), the ALP and Greens at the racecourse polling place in Alice Springs.

By KIERAN FINNANE For the next seven weeks the Town Council will be headed by by Jamie de Brenni as Mayor and Jimmy Cocking as...
Read more

By ERWIN CHLANDA NT government COVID personnel are in breach of standard Correctional Services protocols for dealing with people going on a hunger strike which...
Read more

By ERWIN CHLANDA Hunger striker Braedon Earley, who is detained in the Howard Springs COVID quarantine station, says rubbish he has seen around what amounts...
Read more
ABOUT US
FOLLOW US
©