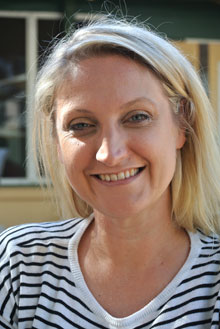 If the CLP didn’t have Heidi Williams (pictured) to run in Namatjira they might have to invent her. Her background is as diverse as the sprawling electorate in the Territory’s south: part black bush communities with their endemic problems, part well-off white rural residents on comfortably sized blocks, all along the southern side of the range.

And for her take on the most troubling concern of Alice Springs at the moment – out of control kids – she can depend on experience from both sides: a white woman having children with an Aboriginal man and having one foot in a bush community, and the other in town.

The blue-eyed blonde with a Swedish, Norwegian, Scottish and German ancestry, who grew up in the Armidale region of NSW, came to The Alice in 2003.

After some work in a pharmacy in town she moved to Hermannsburg where she ran the tea rooms in the historic precinct for four years, almost (as she puts it) perfecting the skill of making Apfelstrudel while developing an interest in politics.

In the turbulent years of the Intervention and the hapless Labor moves to reform local government she became a confidante of the legendary local politician and musician, Gus Williams, whose importance was underscored by the government providing for him a state funeral in 2013.

In that year her four-year marriage to his son, country music crooner Warren H, fell apart although his “amicable and supportive” role in her blended family’s life continues.

Ms Williams moved back to town in 2013 and took a job with Bess Price, the CLP Member for the adjoining bush seat of Stuart.

The kids – hers and all the others – and their future  is the principal reason for Ms Williams now going into politics in her own right.

She says the urgency is acute: “The bush communities have become known as ‘widow cities’.

“The men are either incarcerated, they’ve moved on or they’ve passed on.

“We’ve got all these children who are being raised, sometimes by the mother, but a lot of times it’s the grandmother, or the auntie, or whoever has her hands on deck to try and raise these children.

“I am a mother, and I am in the situation where I’ve got children everywhere.”

That’s two of her own, two of Warren H’s from a previous marriage, and a little ring-in who turned up one day and didn’t leave.

She is standing for Parliament “to influence change of the future for these children, in a more effective way than just a piecemeal approach”.

She says the younger ones mostly stay out on communities “but if the parents or the carers tend to come to town a lot the older ones are hanging around the town camps, often not enrolled in school full time. They are missing out a lot on education.”

Ms Williams is very much in favour of children who are roaming the streets being “picked up, to enforce them getting on that bus, or getting on that plane” which would take them home and go back to school.

Should they be forced?

“Absolutely. I believe so.”

Chief Minister Adam Giles recently said: “We are not going to mandate the forced lock-up of kids who may be walking around the streets at seven o’clock at night. We are not that draconian”.

Says Ms Williams: “I’m not sure about that. The amendment of the Bail Act to remove the resumption of bail is some help, and so are electronic monitoring devices. But these are measures after the event.”

“We need to get a lot more of the responsibility back to the carers – where is that 11-year-old Johnny? What’s he up to?

“I know a lot of carers are struggling. They are at their wits’ end. The children feel they don’t have to listen. It’s a case of having fatherless children.

“I am conservative in my values. I believe it does take a man and a woman to raise a child.”

She says she is lucky to have older children who live with her: “One is a big brother and one is a big sister, and they provide that, which supports me, and the small kids have that balance of male and female.”

Ms Williams says she has for years been reaching out to sitting Member Alison Anderson, who in traditional terms is the equivalent of her sister in law, to see “if we can work together” – but without results.

Ms Anderson, during the current term of government, moved from the CLP to the Palmer United Party to being an Independent.

Ms Williams says compared to several electorates she has visited, Namatjira “is one of the most neglected. It’s like it has been forgotten”.

Would she not have to blame the current government for the past four years of that?

“It is like that because it has a Member who has chosen to step away. So there has been a lot inaction.” 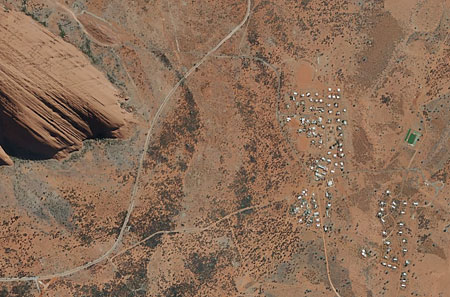 She lists significant expenditure announced in the 2016/17 Budget, including $10m for housing in Mutitjulu (at left, at the foot of The Rock) – 20 new ones and fixing up four which are “beyond repair”.

We put the following questions to Ms Williams, as we had on Friday to Mr Giles: The people of Mutitjulu, directly or indirectly, own the Uluru National Park as well as the adjacent Ayers Rock Resort.

Over the years the resort, including under its previous owners, has made significant efforts to recruit local labour, with paltry results.

Should not the Mutitjulu residents get a job and pay for their houses on land they also own, rather then getting the taxpayer to provide them?

Yuendumu and Papunya, where job opportunities are vastly less available, are getting five and two houses, respectively, in the current NT Budget.

Says Ms Williams: “The issue is the overcrowding. A lot of people from Imanpa and Docker River come to Mutitjulu. One house has 15 people in it. The Mutitjulu Aboriginal Corporation has gone throughout difficult times. Now they run the store and some people are working there.

“The corporation says, enough is enough, we want to run this community. And I understand there will be announcements about the future this week.”

NEWS: Should the people there take jobs which are handed to them on a platter?

WILLIAMS: The resort has up to 30% Aboriginal employment now.

NEWS: They are mostly from Redfern, from Queensland and so on.

WILLIAMS: They are from all around Australia, you are right, but there are local people starting to work there. A lot of local people also work with Parks Australia. There is a whole generation of people in their mid twenties who have gone away, got a really good education, and have come back. They are in key jobs in the community, and they want to drive that change.

In his comment on the subject, Mr Giles pointed to income from arts sales by people in other communities.

He said: “There are a range of different dynamics in terms of Indigenous servicing, lifestyle and living conditions right across the Territory.

“They all have different economic opportunities. We should not be penalising Mutitjulu by not providing them a standard or effective living conditions just because they have a resort next-door.”

NEWS: Are the houses rented? Are there conditions (such as having a job)?

WILLIAMS: At the moment they are not, but the houses are not built yet. The Remote Housing Development Authority has just been formed. That’s the vision. It includes community ownership, looking at appropriate land tenure and individual home ownership, managing their own tenancy, repairs and maintenance.

NEWS: What is the element of self-help in that process? If a doorknob falls off, what happens?

WILLIAMS: In Docker River the residents have just finished a whole lot of home refurbishments. It was contracted out by the MacDonnell Regional Council. A lot of young people were doing the work. It was fantastic. Now we need to transfer that knowledge into real jobs. I know from my own experience that a lot of improvising needs to go on out there in the bush.

NEWS: Is that the vision?

WILLIAMS: It’s not yet set in concrete, but that’s what I want to happen.

And as well there are more mundane election issues: One close to Ms Williams’s heart is widening Ilparpa Road and adding bike paths and walking paths.