By MIKE GILLAM All photos © Mike Gillam When people ask, I describe myself as a refugee from Melbourne, and my teenage years in horizon stretching...
Read more
Issue 38

By KIERAN FINNANE Updated, 23 September 2020, 11.13am: This version contains some factual corrections regarding the configuration of the exhibition and the subject matter of...
Read more
Issue 33

By KIERAN FINNANE It was a case of watch and emulate: two of the top painters from the ‘Hermannsburg School’, working in the tradition of...
Read more
Issue 10 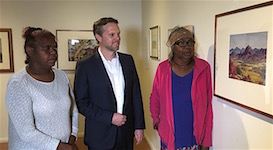 After years of campaigning by descendants and Big hArt, 100% of the renowned artist's copyright has been transferred to the Namatjira Legacy Trust, with entrepreneur and philanthropist Dick Smith helping clinch the deal. KIERAN FINNANE reports.

The art of collecting

A long-term loan and a generous donation have brought two key works into the Araluen collections, from which three new shows grace the galleries for the summer. A surprise performance marked their opening.  KIERAN FINNANE reports.

Colours of landscape, of dreams across five generations

The worth of investing in the artistic development of the fifth generation of Namatjira descendants, most of them still school children, is clear. Of the fourth generation only Elton Wirri, born in 1990, has really made a name for himself as an artist. And how did he do it? By starting young,  painting alongside his father Kevin and with application, over and over. This is what the young people are once again doing now, thanks to the commitment of artists of the third generation with the support of Big hART and Ntaria School. KIERAN FINNANE reports. Pictured: Mount Wedge, 2010 by Martha Namatjira. 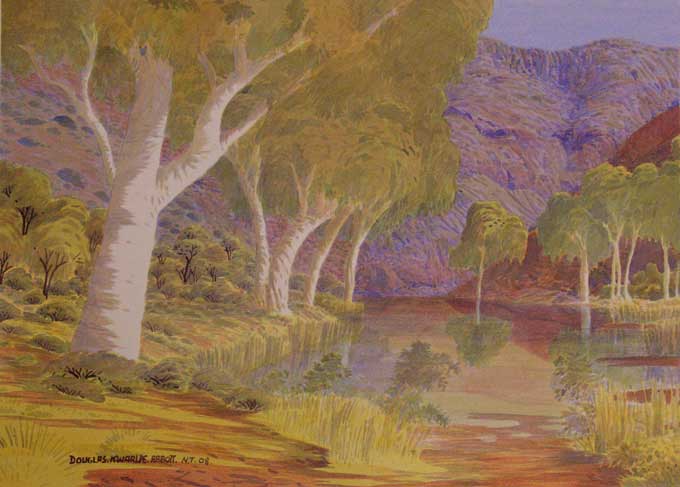 The watercolour tradition known as the Hermannsburg School and established by Albert Namatjira is alive and well. An exhibition of current exponents at Talapi in Todd Mall shows their distinct approaches and leaves an impression of artists fanning out into the country in all directions, capturing it in many moods.

A superb large painting by Douglas Kwarlpe Abbott takes you into Ormiston Gorge, in the glow of late afternoon, when the gorge is full of water and golden lighten, the tree tops molten lime and and cliff-faces softly radiant in mauves and reddish-pinks. A feast of colour without tipping towards too much, this painting is so seductive of the senses that you can almost hear the hum of early summer.

Other smaller works by the same artist are all but on fire with the intense reds of sunstruck rockfaces, such as his rendering of Standley Chasm, a subject made familiar by his artistic forebears, Namatjira and Rex Battarbee.

Peter Taylor in contrast captures the bright white light defining the edges of things and structuring his compositions like the bones of a hand.  The dazzle becomes more diffuse across the sweeping valleys and dancing ranges rendered by Hubert Pareroultja or Gloria Paanka, while Elton Wirri brings out the shadows that firmly ground the landscape features. By KIERAN FINNANE

Two packed houses get shot in the arm from the play, Namatjira 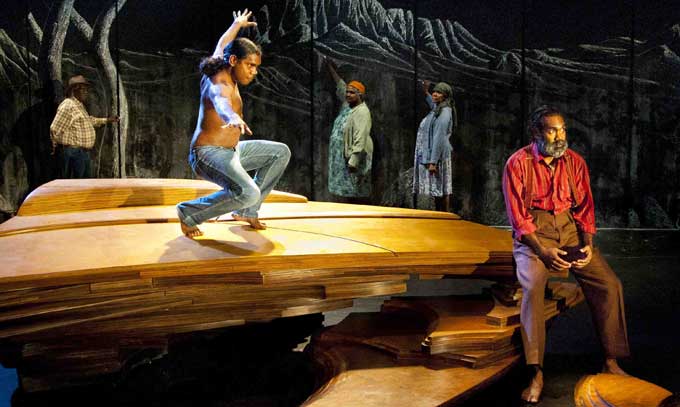 What did we feel coming away from the show of the theatre production, Namatjira? That things will get better, that they are better – between black and white Australians and for Aboriginal people themselves. And this was despite the sad, even bleak last scenes that show the unrelenting pressures on famed Arrernte watercolour painter Albert Namatjira as he tried to manage his success in the white world and his position within his own large family and wider clan; and despite our recognition that these pressures in many ways are unchanged today.

So how better? By the very fact these two outstanding Aboriginal performers, Trevor Jamieson and Derek Lynch, and all their collaborators, are able to trace this foundation story of black-white relations through laughter, more than tears, and through a rich narrative, not ideology, sentiment and slogans. And by the fact that they have drawn sell-out houses around Australia; that 850 people, mostly remote community residents,  traveled into Ntaria / Hermannsburg  for the staging of the play there last Wednesday night; that Araluen sold out two shows on Saturday and could probably have sold out a third. We are hungry for this – being able to laugh at ourselves, at our collective foibles, clumsiness, ignorance as we deal with one another, being able to rejoice in the creativity and friendships that bridge the gaps. For the revelatory story of the show is the friendship (much more than mentorship) between Namatjira and the World War I veteran turned artist Rex Battarbee – the ways that art opened up possibilities for them both, became the bridge between them and the ground for a friendship that endured. KIERAN FINNANE reviews.

Pictured: Derek Lynch (left) and Trevor Jamieson, with artists from the Namatjira family in the background. Photo by Grant McIntyre, courtesy Big hART.

Namatjira: for the man and now the project art was a catalyst for change 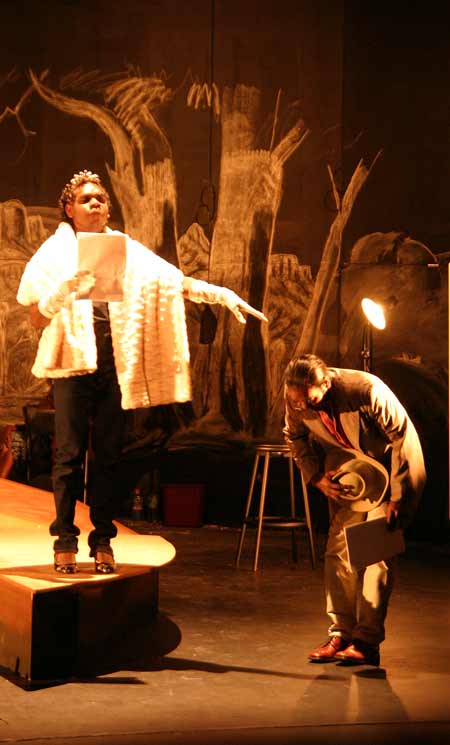 Behind the sell-out theatrical tour of Namatjira, which has its final Australian performances in Hermannsburg and Alice Springs this week, is a three-year project for social change through art. Longer than that if the start is counted from Big hART's Ngapartji Ngapartji project. I ask Scott Rankin, Big hART's director, how he thinks the company's involvement with people in The Centre has contributed to social change over this time.

Complex problems require solutions on many levels, he replies. The social change debate is mostly focussed on "quick fixes" to force change through action that is mostly "siloed" into a single government portfolio.

Big hART's approach is to work at the grassroots level, with individuals. What is required from community and government is to support those individuals – he calls them "entrepreneurs" – who are effecting change in their lives, going beyond the usual "soft Left versus hard Right" adversarial approaches to the issues.

Art and culture are used as catalysts and perhaps never more pertinently than in the Namatjiira Project  which has at its heart an emblematic story of a man effecting radical change, through art, in his life, the lives of those around him and indeed the cultural and social life of the nation.

Namatjira, the theatre production, is in its own way an emblematic story, as the most successful current touring production in Australia. It shows, says Rankin, that good art, attracting widespread attention and acclaim in the country's big cities, can come out of remote Central Australia. KIERAN FINNANE reports.

PHOTO: Hamming it up big time – in the 2010 Alice showing of the work-in-progress Derek Lynch as the Queen (left) and Trevor Jamieson.