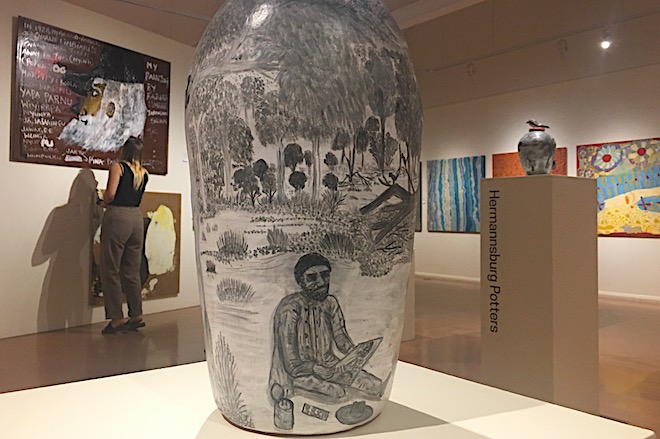 Updated, 23 September 2020, 11.13am: This version contains some factual corrections regarding the configuration of the exhibition and the subject matter of Hayley Coulthard’s work.

How much the ‘mob’ matter at Desert Mob, the annual flagship exhibition from the region’s Aboriginal art centres, was made stark by their absence in this year of Covid-19 restrictions.

Araluen and Desart together with art centres took the decision early that it was too risky, in particular for artists, to present the usual program which always draws big crowds.

A small number of artists did in fact make the journey and, while I visited the gallery for a preview, they were gathered for a barbecue outside. It was not the same though as the excited hubbub normally leading into the opening ceremony, and afterwards, the dazzle of packed galleries, works and viewers jostling for space and buzzing around the latest surprises, followed the next day by an opportunity for collective learning and reflection at the symposium.

Desart valiantly assembled offerings for an online ‘symposium’ (you can see it here), video works from five art centres, but I sorely missed the ‘in real life’ presence of artists and art workers presenting on stage. Videos are a great entree into art centre stories, and they are often used during the live symposiums, but I was reminded this year, when it was just me and my computer, of what a much richer experience it has been to have them presented and spoken to by the artists themselves. And of how rare that is, in this region of all regions, for Aboriginal people to lead public speaking events. 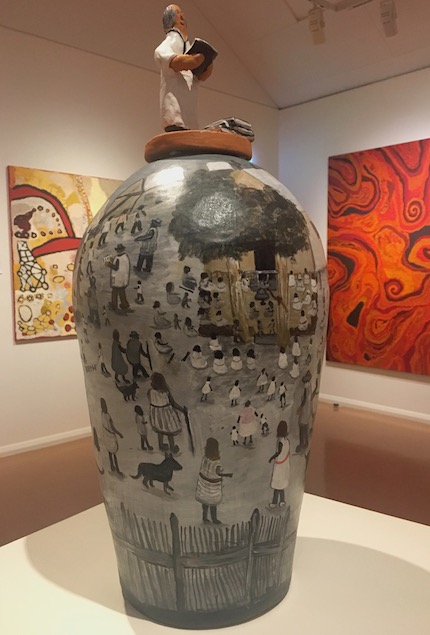 The exhibition is leaner this year, as well. The Covid-related shutdown or reduced operations of many art centres has meant fewer works produced; so instead of the usual 10, a maximum of seven was decided upon, with several art centres sending fewer. Thus for the first time in years, the decision was made to leave a non-Indigenous show, the large solo by Neridah Stockley  in Gallery One.

Serendipitously, with its focus on the Hermannsburg Historic Precinct, Stockley’s work enters into a dialogue with the Desert Mob contributions this year from the Hermannsburg Potters. (I commend to readers the video from the Potters, in which you can see the artists mentioned below at work, but particularly for the account by Judith Pungarta Inkamala of her pot made response to last summer’s devastating bushfires in NSW – compassion itself, for the people who lost their homes, for the firies, for the koalas and for the bush.)

The Potters continue to treat their ceramic vessels as a surface for figurative story-telling. Striking in this show is their departure from colour, with their narratives presented mostly in black and white, as though drawn with graphite.

Stockley too uses her ceramic surfaces (as she does paper or board) for representations, but her approach tends towards abstraction and nowhere does she represent or allude to the human figure, except via the traces they may have left, from buildings and fences to sewing and text.

The Potters in contrast are loving figurationists, both on the painted and drawn surfaces of their vessels and in their signature sculpted figurines that adorn the lids. Their subject matter is always life in the human and natural world (though they probably don’t think in this divided way) as it unfolds in and around their community, past and present. And there have been many interesting works from them over the years addressing mission times. 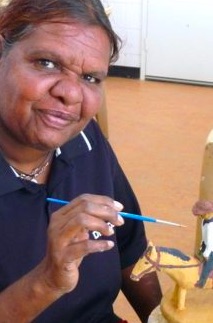 This year two works in this vein are particularly interesting to consider in relation to Stockley’s show. One, by Hayley Panangka Coulthard (left), titled Lhira Pinta Urlpaiya / The Finke River (top), shows an artist who I took to be Albert Namatjira (although it is in fact her grandfather Otto Pareroultja, a contemporary of Albert, and with his brothers Reuben and Edwin, also a noted watercolourist). The artist is depicted seated on the ground, at work on a painting. Or rather, if I take my cue from her title instead of zero-ing in on the human figure (as I might have also on anything human-made), it shows the riverine landscape, the mountains rising steeply above it, and the artist in that Country, giving expression to it, just as Coulthard is.

Stockley’s show references as a starting point three works by Namatjira, with her interest being in what is represented there and how. Coulthard’s interest is more in how indivisible the process is, between Aboriginal seeing and mark-making and Country. Via more than 100 works, Stockley’s show becomes a meditation on ways of seeing – how the Western eye is always drawn to the human and human-made and how that reflects as well as shapes our attitude to the land. In a single work, Coulthard also offers the viewer such an opportunity, with the perspective of an Aboriginal eye. 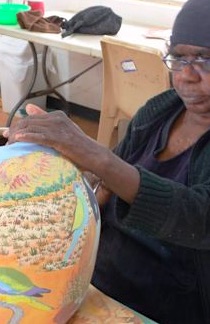 In Imankinya (above left) Judith Pungarta Inkamala (right) is decidedly focussed on the human, from the figurine of the balding White pastor and his Book on the lid set above the multitude, to the community residents swarming towards the church where the bell is being rung, calling the women and men, girls and boys, Black and White. These are not figures frozen in history, this is history as living memory.

The instantly recognisable white-washed facade of the small church in the historic precinct is there, as it is in many images by Stockley, but in Inkamala’s work it stands less for the colonisers’ claim and more for the Western Aranda’s counterclaim, the way they have made that history their own, absorbed those introduced spiritual practices and narratives and vitalised them in their own language and guise. As with Namatjira, Inkamala’s embrace of art practice and engagement with art audiences and markets is part of this process.

Some 29 art centres have sent work to Desert Mob in this trying and worrying Covid year. Its riches are a testament to the creative momentum of Aboriginal artists and communities. I didn’t know where my focus would land when I began writing this – there are plenty of alternative directions which viewers will no doubt pursue for themselves in the coming weeks.

Images of the artists sourced from the Hermannsburg Potters website.