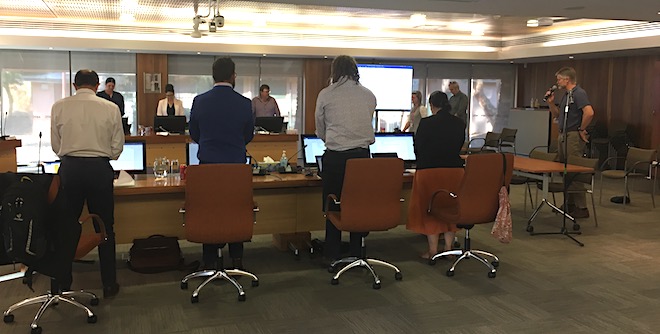 Councillor Marli Banks wants what the public is clamouring for but our governments seem incapable of producing: an immediate practical step to curb the antisocial and criminal behaviour of some young people in Alice Springs.

Her focus – prompted by the death of hit-and-run victim Shane Powell and as foreshadowed in these pages yesterday – was on the much discussed, long awaited 24-hour drop-in service for youth.

What would be the constraints on council, including its finances, to fit out a building for this purpose? she asked, giving the former police station as an example.

The building was used as the temporary women’s shelter while the new shelter was under construction and is thus likely to already have some of the necessary features – ablutions, cooking and sleeping areas.

The community needs to hear from council on this, a clear communication that “we stand beside them”, urged Cr Banks (pictured during a council meeting by Zoom earlier in this pandemic year).

Not surprisingly, given council’s budget allocation towards a youth hub ($400,000+), and the prominence of a region-wide approach in the CARGO submission to the NT Government, of which council was a key proponent, there is already a lot of information about the possibilities.

What is surprising is that the elected members of council seem to be ignorant of them – and this includes the four, Cr Banks among them, who contested the recent NT election in which crime, and youth crime in particular, was a hot button issue.

No one in last night’s meeting seemed to be across the research and detailed discussion behind either their own budget for a youth hub and the CARGO submission, in which support to youth was the number one priority, in the form of a 24-hour purpose-built youth hub, with satellite services, staffing and programs to all major sites in the region, with links back to the core services in Alice Springs.

CARGO is made up of multiple organisations, Aboriginal and non-Aboriginal, with the Town Council and Chamber of Commerce in the lead and the submission was made under the signature of Council CEO Robert Jennings.

To date, there has been no adequate explanation beyond the circumstances of the pandemic of council’s failure to pursue a youth hub, or at least get a start on it in Alice Springs. (A youth program based in Larapinta seems to have taken priority.)

The upshot of last night’s debate is that councillors will get to see the information held by Mr Jennings and discuss it at the next council forum on 9 November.

These forums are not open to the media or public. But we can expect that after 9 November some councillors at least will be pushing to bring the public into the picture.

There was talk last night of the need to tackle the issues more broadly.

Cr Jimmy Cocking spoke of the way that a community tragedy in Tennant Creek (the rape of a two-year-old) had triggered a  “whole of government approach” in the Barkly and of the need for council to lobby the federal government for “a regional deal”.

Council should send “our two best’ – Mayor Damien Ryan and Deputy Mayor Jacinta Price – to Canberra to start that conversation.

We need “to think big”, he said, about stimulating the local economy and achieving long-lasting benefits for not just youth, but adults too and to address the division in the community.

This approach was backed by DM Price, Cr Eli Melky, who saw what is required as a “multi-million dollar effort”, and Cr Jamie de Brenni, who extolled the experience that council could bring to the conversation – 12 years on council of “our leader”, the national profile of the deputy mayor, the lived experience on a remote community (Hermannsburg) of Cr Glenn Auricht, the nine years on council of Cr Melky, the “traditional people in this room” (presumably meaning Cr Catherine Satour and DM Price).

Cr Matt Paterson also seemed less bent on immediate steps, wanting council to write to the Chief Minister Michael Gunner and Territory Families Minister Kate Worden to invite them to discuss “a joint response” with council, taking Mr Gunner up on recent comments in the media that he would love to see council as part of the solution, working alongside the NT Government. (Haven’t we been there before – the back and forth of invitations, comments in the media, and no meetings, let alone a joint response?)

A motion to this effect was carried.

Cr Auricht, however, urged council not to put off action for the “bigger picture stuff”. Getting all the parties together would take too long, “we need to do something now”.

At the forum, council should focus on what they can do in the more immediate term to initiate a 24 hour drop-in centre, he urged.

Cr Banks appreciated his support, saying again that “we can’t wait around”, and that raising the idea in public was important, so people can see we are “not sitting silent”.

Photo at top: Councillors standing for prayer at the start of last night’s meeting.