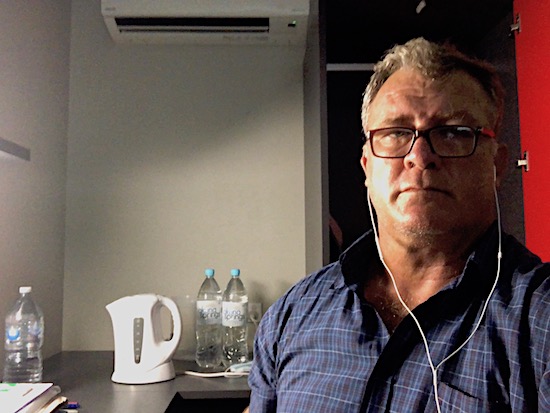 By ERWIN CHLANDA
NT government COVID personnel are in breach of standard Correctional Services protocols for dealing with people going on a hunger strike which kick in 24 hours after a prisoner has stopped eating.
Businessman Breadon Earley (above) has been on a hunger strike for 73 hours yet has had no medical attention while undergoing quarantine at the Howard Springs coronavirus facility.
After one day a Correctional Services prisoner not eating would be under observation by a doctor, says a source familiar with gaol routines, speaking to the News on the condition of not being named.
“The minute someone misses three meals that person is considered to be on a hunger strike,” says our source.
“They are then seen every day by a medical practitioner.”
This is Mr Earley’s third day.
If the prisoner continues not to eat the process “would get to a point, if their health is deemed at risk, that the authorities may feed the prisoner through a tube”.
Mr Earley says he has had contact with police officers, he has expressed his concerns to them, asked to make a statutory declaration and urged charges to be laid against people running the facility.
Police have agreed to provide stat dec forms: “Police are helping,” says Mr Earley.
The News put the following questions to COVID Media at 10.03am today but we have not received a reply. This was the text:-
You have a person, Braedon Earley, in your custody at the Howard Springs quarantine facility who says he has not taken any food for 66 hours.
Do you have responsibility for that person?
Have you done anything to deal with that situation?
If so, what is it?
If not, why not?
Will you be doing anything?
If so, what?
Mr Earley is continuing his hunger strike on until Saturday morning although members of his family have asked him to break it off now to avoid serious health consequences.
Facebook
Twitter
Pinterest
WhatsApp
Previous articleCLP to put ALP last
Next articleDiversity at the top in council … for next seven weeks