Tourism wholesaler must come back to the NT 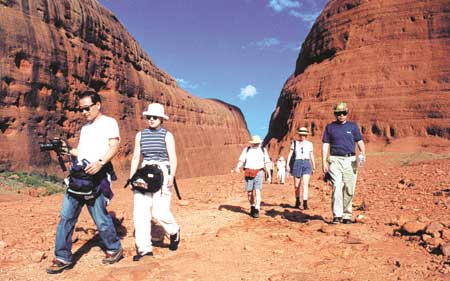 But a Tourism NT spokesperson claims Territory Discoveries “was a product of its time,” created in 1999: “When it was established, the internet had only been open to commercial traffic for three to four years and most tourism operators did not yet have websites.”

Ms Tatula counters: “Talk to a Territorian was the catch cry. No one knows the Territory better than those who live here. No one sells it with the same passion a Territorian does.”

Formerly a government business unit, under Tourism NT, Territory Discoveries is now operated by the AOT Group, one of Australasia’s largest travel companies.

“This started under a licence deal in 2014. I believed this was wrong then and I believe even more it is so wrong now.

“Small operators in the NT have gradually fallen by the wayside due to high commissions and participation costs, these have had to be paid, to be part of the programs.

“The NT has become a mass market, bus product and from what I hear, it is not proving as attractive as it was when there was a plethora of small operators with a couple of vehicles offering a wide range of exciting and interesting adventure programs in 4WD.

“There is a handful of operators now compared with what there was 20 years ago.  It is not seen as an exciting destination anymore.

“As a wholesaler AOT has a huge raft of competitive product including Fiji, NZ, NSW, Queensland and WA and staff would be motivated to sell based on profit percentages rather than love of the Northern Territory.

“Have a look at the number of operators in the current Territory Discoveries brochures and website and it clear the adventure has gone. The tours are adequate, but the passion has gone.

“Bringing Territory Discoveries home would deliver upwards of 100 jobs and they should be split between Darwin and Alice Springs as they were in the past.

“All the revenue spent would provide further jobs in those centres included rentals, power water services transport and so on.

“There would be excellent career paths for young people in sales and marketing, product development, operating their own businesses and working in the tourism industry.

“Now, all those jobs are in Melbourne or through overseas call centres. To the best of my knowledge, none are in the Territory.”

The Tourism NT spokesperson says Territory Discoveries was created in 1999 to expand the breadth of packaged tourism products available, both directly and through retail travel agents.

In 2013 a private sector provider sought and the only applicant, the AOT Group, was accepted.

Facebook
Twitter
Pinterest
WhatsApp
Previous articleOnly way Feds would bail out the NT is by taking it over
Next articleGunner blames pandemic for fiscal fiasco: Commentator