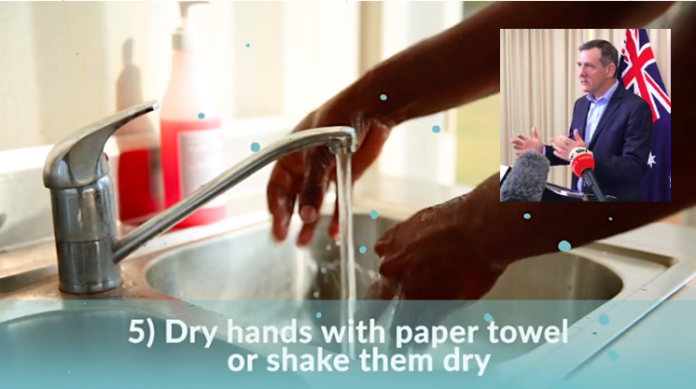 Michael Gunner (inset) is said to be washing his hands of the NT’s record deficit. Image: Government publicity of pandemic precautions.

“Gunner plays Territorians for mugs” is how political commentator Dr Don Fuller (at right) reacted to the “Coronavirus Financial Report” presented by the Chief Minister this week.

Mr Gunner and Treasurer Nicole Manison, in a clear attempt to blame the pandemic for their government’s parlous financial position, say in a handout: “The COVID-19 Financial Report shows the impact of the coronavirus crisis on the budget position, including the Territory Government’s measures to save lives and save jobs during this pandemic.”

However, Dr Fuller says the NT Budget deficit, before the Coronavirus, was estimated to be over $1 billion with net debt of around $6 billion.

He reported this in a series of articles for the Alice Springs News.

He said today: “Net debt is predicted to blow out further to over $8 billion by 2022/23 as the NT is forced to borrow to cover the wages of public servants and pay increasing interest amounts on the escalating debt.

“In 2019-20 Budget Papers presented to the NT Legislative Assembly the general government net operating deficit had grown to a deficit of $632m million before the serious negative hits associated with the coronavirus.”

Mr Gunner’s financial report this week is in the place of the usual May Budget, now to be handed down in November, well after the August election.

While the record deficit pre-COVID was the result of three and a half years of government mis-management, what is following is at least partly bad luck.

Says Dr Fuller: “Combined with a fall in mining royalties and tax revenue, the NT’s expected revenue bucket this financial year is $6.1 billion, down from the estimated $6.8 billion.”

He says by late 2018 it had become clear that the Northern Territory was heading for major financial difficulties with no immediate plans by the Gunner government to fix deep government fiscal problems.

This was despite the emergency being called out by “courageous” members of the government’s own side, Ken Vowles, Scott McConnell and Jeff Collins.

“However, such obvious, natural, responsible and ethical concerns for the Territory and its people were not to be tolerated by the Gunner government’s approach,” says Dr Fuller.

“All three were forced on to the cross benches and out of the Labor Party. This of course, also says much about other senior members of the Gunner cabinet.”

Key concerns of the “sacked” insiders included misgivings that the NT’s debt was forecast to increase tenfold to $35.7 billion by 2029-30 with Treasury being forced to borrow to cover day-to-day operating costs.

“This is seen to be unacceptable financial management by Budgetary experts, as debt finance should be used for long term asset financing, such as infrastructure developments rather than to cover operating costs.”

“The Territory was the only jurisdiction to have a negative operating result along with such a large deficit. Since that time it has become negative at an increasing rate.

“We are now all being led by the nose down this increasingly slippery slope.

“The real implication of such governance is that it did not have the wit and competence to protect Territorians from important external shocks by sound financial and economic management.

“This is perhaps one of the main responsibilities of a government – to protect its citizens.

“Such shocks could have been in the form of a conflict or a trade war or a major climatic event.

“However, in this case it was a pandemic and the government was the most unprepared of any government in Australia – by a long shot.

“As a result, Territorians will be affected far more,” says Dr Fuller.