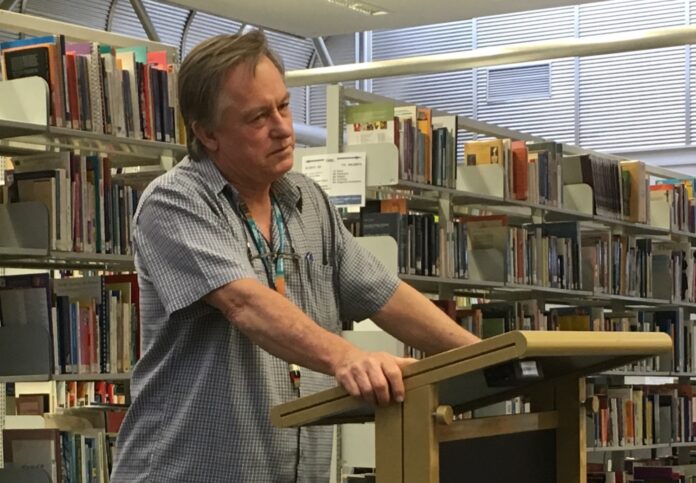 A common view is that Canberra will bail out the Territory from the Gunner Government’s record debt which is tipped to grow to $8 billion by the end of the year.

But CDU Professor Rolf Gerritsen (pictured) in Alice Springs says that would mean the Feds taking over the NT again – an option that’s growing on a lot of people.

Without the Commonwealth our future looks dismal unless rigid “Budget discipline” is introduced, something of which there is little evidence so far.

For example, the government is spending an extra $20m for police to secure borders, notwithstanding that we have three times as many cops than the national average.

“The Feds won’t bail us out,” says Prof Gerritsen.

“We’re just not important enough. If the Feds would bail us out they would resume control of the Territory. They would have to or else we would just spend the next decade running up our debt again.”

What if the Feds won’t bail us out?

GERRITSEN: I would say within the next three years our credit rating will go down. We’re now on the third peg of credit ratings. We’ll go down more. The costs of our borrowings will go up and eventually the Territory Government won’t be able to deliver services because the entire Territory Budget will entirely be spent on servicing the debt. Unless there is budgeting discipline.

NEWS: At the current performance of the Government, how much longer have we got?

GERRITSEN: It’s hard to tell because we don’t know how long the Coronavirus is going to last.

Prof Gerritsen says there is room for manoeuvring as the attrition rate in the NT public service is high. The police could be back to its original number in 18 months.

“If you don’t recruit you can eventually get the public service down quite a lot.

“Us whitefellers are expatriates. We leave the Territory at one stage or another. There is demographic work that says if you stay for five years you stay for 20 or 30. Many people stay for three.

“In the pubic service you have an attrition rate of about 30%,” says Prof Gerritsen.

“Public servants are between 12% and 15% of the electorates in the northern suburbs of Darwin.

“According to received wisdom and 2012 aside, this is where the election is decided. You can’t really hit the public service.”

NEWS: How likely is it for the economy to grow sufficiently for the debt to be paid off in reasonable time?

GERRITSEN: One assumption is that you restrain expenditure growth to the CPI growth – Budget discipline. On forecast levels of debt next year, $7 billion plus, I reckon it would take 10 to 20 years to pay that down.

The Treasurer’s claims that the Government had been exercising Budget restraint before COVID-19 “is smoke and mirrors stuff.

“For instance they announced the ship lift, such a dodgy project. They put $100m of the taxpayer’s money into it. The other $300m was going to be borrowing. That $100m is not in the Treasurer’s statement yesterday. They have not budgeted for it.

“We can’t tell until the Budget comes out in November but I suspect there has been a lot of Budget discipline exerted on Indigenous services.

“In days of yore, when there was proper scrutiny, not this farce of an Expenditure Review Committee, the Government would publish estimate expenditure and actual. Well, they’ve stopped giving us the actual.”

NEWS: What was the position of the Budget before COVID-19?

GERRITSEN: Our revenue had collapsed. GST was $261m less than we budgeted for.

NEWS: COVID-19 couldn’t be foreseen. The GST reduction could.

Direct aid to businesses played a role, he says.

Today it was announced that $3.5m would go to the Alice Springs Asia Pacific Storage and Maintenance Facility which is making a killing, storing jetliners from the world over grounded by the pandemic at the airport, while in town much of the economy is struggling.

Prof Gerritsen says more storm clouds are ahead: Housing construction dropped 10% in 2019/20 and is expected to further decline 16% in the fiscal year just started.

“That’s a massive hit to GST,” he says. Half of the NT’s income comes from GST.