Home Issue 24 ‘What we see in our Country’: Yarrenyty Arltere 20 years on
Issue 24Volume 25

‘What we see in our Country’: Yarrenyty Arltere 20 years on 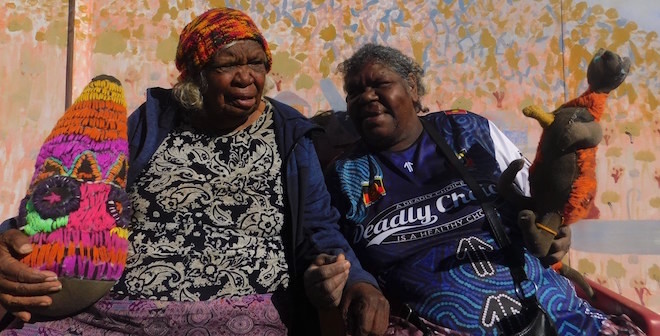 In a world now full of opportunities missed, one more for the count: the 20th anniversary of Yarrenyty Arltere Artists, which was to have been marked this month by a celebratory exhibition at Araluen Arts Centre. As the coronavirus crisis broke upon us, the art centre was closed and the exhibition postponed until next year.

It would have shown where this valiant group of artists on the Larapinta Valley / Yarrenyty Arltere Town Camp have come from, from their beginnings at the camp’s learning centre in 2000, through to their establishment as an enterprise in 2008, aided by the small philanthropic organisation Igniting Change, and onwards, to national and international exhibitions and awards.

There’s been some despondency. When I first spoke to her, Yarrenyty Arltere chairperson and well-known artist Marlene Rubuntja lamented the impact of the pandemic: “We do a lot of work for nothing, that sickness come and destroy everybody here.”

But soon she turned to looking forward to the art centre reopening, expected on 9 June, and spoke of arts workers Maurice Petrick, with wife Rosabella, and Cornelius Ebatarinja “straightening everything up” in readiness.

And she was keen to show me the new work she and Trudy Inkamala have been doing.

She is not shy to rank herself and Trudy, whom she calls Aunty, as the art centre’s top artists, laughing as she does so, with the other well known names – Dulcie Sharpe, Rhonda Sharpe – not far behind.

Before the centre’s shutdown both Marlene and Trudy had creative breakthroughs, with works on paper produced during a workshop with artist Marina Strocchi. A number of the artists have ventured previously into works on paper, including print-making, to appreciative response from art-lovers, but these new works of Marlene and Trudy’s achieve a new expressive power. 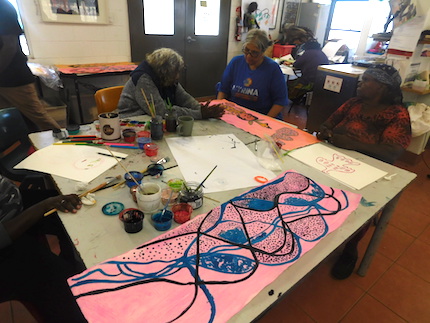 For Marlene these were her first landscapes with paint and brush  – a series of apwerte (hills).

Left: In the workshop, Trudy discusses her work with Marina (centre); Dulcie Sharpe on the right; one of Marlene’s landscapes in the foreground. Photo supplied.

The Town Camp sits at the base of the ranges leading up to the peak of Alhekulyele (Mount Gillen) and she has depicted that splendid vista before, in her sewn piece that won the inaugural Vincent Lingiari Award.

But in these works on paper the hills are as she imagines them, recalling trips “out in the countryside”: “You travel around, you see colours changing, can’t be black all the time, or blue, see that brown-reddish colour.”

Her ability with the brush she takes as perfectly natural: “My father was painter”, referring to the late W. Rubuntja, adept in both the watercolour landscape tradition and the acrylic “land rights painting” tradition using Aboriginal iconography.

Sophie Wallace is the centre’s longtime coordinator – 12 years this year – while artist Tamara Burlando has been working part-time with the artists on this year’s From Country to Couture feature at the Darwin Aboriginal Art Fair (which unfortunately has just been postponed).

On some of the landscapes Marlene has done some over-painting, spidery white lines, to good effect.

She and Sophie are looking at the starker black and white pieces now.

“Do they need anything?” Sophie wonders out loud.

“They need people to buy it and put it in their house!” says Marlene, with characteristic quick wit.

Marlene is referring to the gallery in Todd Mall that works with Aboriginal art centres, including Yarrenyty Arltere.

“You will not!” laughs Sophie. 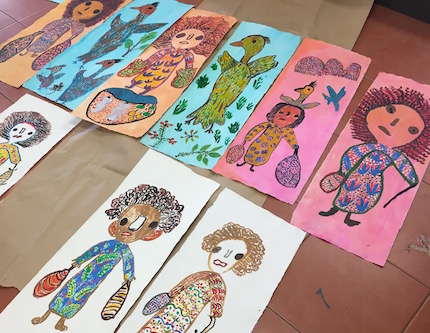 Trained in textile arts, Sophie was instrumental in helping the Yarrenyty Arltere artists make their mark with the soft sculptures that have distinguished them from a field crowded with painters.

It’s different though when artists have become known in one medium and then do interesting work in another. That’s always exciting.

Apart from Marlene’s landscapes, “Trudy did them golliwog!” as Marlene points out with delight (see at right).

At 80 years old Trudy is the centre’s venerated matriarch. She only started sewing in 2014. After the death of her husband it was “too lonely” to stay at home: “I went to art centre to work there, sit down and talk, happy way.”

She instantly created eye-catching work. Her very first exhibit at Desert Mob was acquired by Araluen.

But these days sewing is becoming more difficult. In the workshop with Marina she recreated the character of her soft sculptures in glowing coloured inks on paper. Her favourites reappear, the ‘golliwogs’ Marlene loves, with their round faces and standing-up hair.

They are drawn from her memories of Old Polly and Old Laddie, the grandmothers who raised her at Hamilton Downs and later at Jay Creek.  And there’s also a series of idiosyncratic birds.

Some art centres have remained open during the shutdown, limiting attendance at any one time, but under Federal Government rules Yarrentyty Arltere, being also a community centre, couldn’t do that.

Artists have been working from home as they can, with staff visiting them to keep up sewing supplies and collect work for sale. In this regard, the site Town Camp Designs, created by Tangentyere Artists, under whose umbrella they operate, has been a great help.

Marlene can find it difficult to work from home – too much noise and distraction from her grandchildren – but manages to settle down to it most afternoons, from about 3pm up until news time at 7pm. She has been inspired by her foray into landscape painting to also sew landscapes, in soft bas-relief intricately stitched in brilliant colour.

Trudy has been confined at her family’s outstation, Kwale Kwale near Jay Creek, since late March. After the rules around outstations close to Alice Springs were relaxed in late April, Sophie was able to visit her.

She and I return in May: “I miss you!”, says Trudy, “J9 and you and everybody at learning centre, Marlene my niece, she always make me happy.” 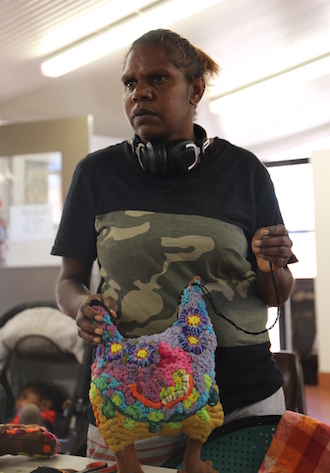 The multi-skilled artist J9 Stanton has worked at the centre even longer than Sophie, for 16 years now, originally offering classes there through Batchelor Institute. It was she who introduced the artists to the natural dying technique still used for the blankets providing the base material for their soft sculptures. These days the blanket-dying is done by the arts workers, Maurice and Cornelius, who are both residents of the camp and have been working at the art centre for the past five years.

Sophie has brought Trudy some sewing projects to work on, but no needle. Trudy isn’t the only sewer at Kwale Kwale: her daughter Brenda, who lives there, and niece Nanette, who is visiting from town, have also been making small sculptures.

“We fighting for one needle!” Trudy tells Sophie. She also complains about how “boring” it is to have to stay at the outstation all the time. Before the shutdown, she was taking the Yipirinya School bus to the art centre, every Monday to Thursday. Now, because of her age and a tendency to asthma, her protective children won’t let her even do a shopping trip – not yet.

But today boredom is relieved: at lunchtime, Dulcie Sharpe, her son Bruce and his wife Louise Robertson (right, in the art room pre-shutdown, photo supplied) and their children arrive for a visit. They’ll have a picnic, cooking ‘roo tails in the creek.

“This is a quiet place to come back and sit down with family, we got tough time in town,” Louise tells me.

Is that because of the shutdown? I ask.

Louise is badly missing her family at Yuendumu. They are “locked out” till next month.

“We can’t get together at the moment, difficult time for all of us,” she says. “The government don’t want us to be more than 50, we all have family more than 50! It’s really hard for us, I hope the government will understand.”

She’s a sewer too and has been making small animal sculptures: “Sewing’s good, keeps my mind busy, been doing sewing for nearly nine years now, with Dulcie, my mother-in-law.

“It makes me keep going, doing the art.”

She is one of three younger women at the centre. Sheree Inkamala and Nanette Inkamala, Trudy’s nieces, are the others.

“Everyone else, smoke ganja and drink,” says Trudy bluntly.

Above: Still from Petrol been wasting our lives, produced by Yarrenyty Arltere in 2017. Cornelius Ebatarinja in the foreground, then Jamal Ebatarinja and Trevor Petrick.

At Yarrenyty Arltere they never steer away from the hard truths. The learning centre all those years ago was set up in response to the high level of sniffing (petrol and other inhalants) on the camp. Their powerful film Petrol been wasting our lives,  tells the story of the harm sniffing does and the way the centre had a significant impact on suppressing the practice, as well as on drinking – at least for some people.

Sophie sees Marlene’s arrival at the art centre in 2009 as pivotal in its history – “finding her voice and power”.

Art and the art centre helped her turn her back on grog, which is part of what makes her feel so strongly about it.

“The art centre for me is just like apmere – it is a place where we live, this is apmere Larapinta.

“We don’t want to stay at home, we come here, sit down all day, do sewing, our mind goes to remember what we got to do, that’s our life.

“When we go to town, it’s not worth it, walking ‘round, looking at people, I come back quick, go home, do my sewing.

She speaks of the pride she feels when she attends events in the city galleries: “We show we strong, Aboriginal people, when we all go to Sydney, Adelaide, Tarnanthi and all that, we show show our art there.

“The way I see it, all the young people going to university, learn a lot. We learn our stuff our way, doing this, using our brains, imagination, what we see in our Country.” 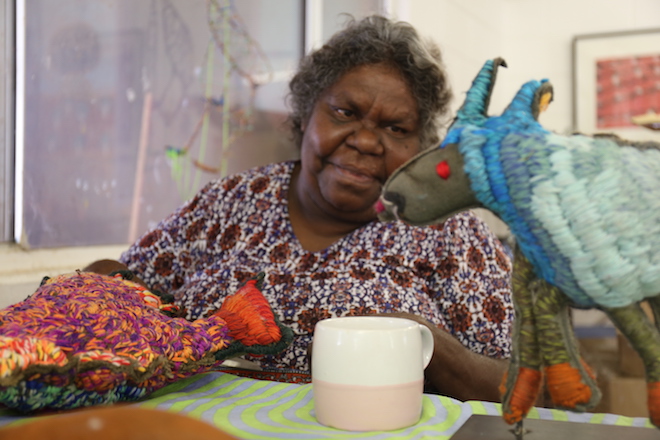