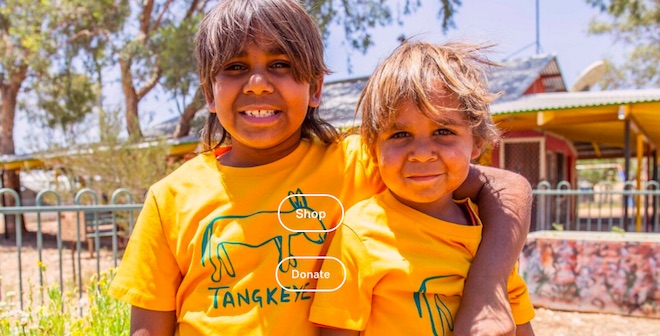 Tangentyere Artists are among the art centres kicking into gear to mitigate the effect of the shutdown. Above: Children promoting the wares of their just launched Town Camp Designs site.

With most Aboriginal art centres in the region in various stages of coronavirus shutdown, the focus of their advocacy body, Desart, is on preparing for recovery.

Some centres have closed their doors but their managers are still working; others are open for specific artists to work while maintaining physical distancing; and others still are open with a focus on community service, says Desart CEO Philip Watkins.

Meanwhile, he feels quietly confident that art centres will recover, though it may take time. His view is based on detailed research Desart recently commissioned, little knowing how acutely relevant it would soon become.

A Financial Snapshot of Aboriginal and Torres Strait Islander Art Centres, analysing data from 2004-05 to 2018-19, provides evidence of the slow but certain recovery of art centres from the impact of the global financial crisis (GFC).

The snapshot draws on financial and operational data from up to 97 art centres in four states, NT, WA, SA and Queensland, with 45% of the total in the NT. 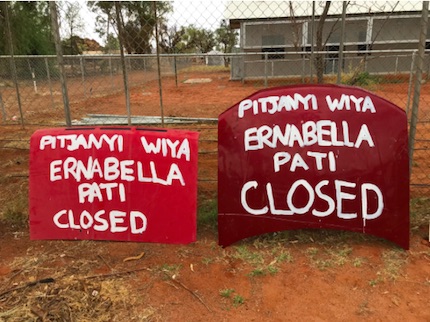 This was followed by seven years of stability and growth to the point that in 2018-19 the average art centre’s annual sales had returned to almost where they were, around the half million dollar mark. The rate of growth from 2012-13 has averaged 5.6% per year.

Left: Ernabella art centre is closed, but their exhibition program is ongoing, even if it will be viewed online.  Below: Pepai Jangala Carroll on the trip to country that produced the body of work for his first USA solo, online now. Images: Ernabella Arts Newsletter April 2020.

In the early 2000s, art centres generated on average 80% of their income from sales, but since 2010 there has been a greater reliance on grants income. The research says this was triggered by new funding priorities for government, particularly around employment, as well as the start-up of new and smaller art centres.

With the growth in sales and the stabilisation of emerging art centres, reliance on grants has been reducing. Over the last two years 41% of an average art centre’s total income was from grants, the lowest level for around 10 years.

Queensland and SA are again at the opposite ends of the range, with Queensland having the highest reliance on grants (for an average of 64.8% of their income), and South Australian art centres the lowest (28.9%). 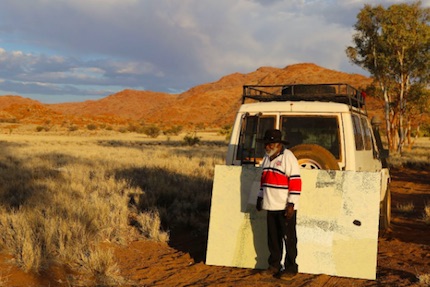 Each art centre relies on a small group of committed artists, reports the research. These core artists – defined as those producing more than 10 artworks each year – are responsible for most of the higher quality works important for an art centre’s commercial and creative profile. Of these core artists, an average of 75.8% are women.

The reason behind this is not explained by the research. Could it be reflecting the passing of a generation? I wonder.

For their long-term health, art centres need to support their existing artists and attract new artists.

The research shows that new artists make up around 10% of all artists, “with some annual variation”.  The variation has been downwards in recent years, seemingly in tandem with the decline in core artists.

Could it be the case that core artists are important recruiters of new artists to the art centres?

Low priced works dominate the sales figures: seven out of ten artworks sell for less than $250, while works selling at more than $5000 account for only 1% of the total.

The lower priced works make up an increasing proportion of the income of art centres, the graph showing a steadily ascending line from 2004-05 to 2018-19. 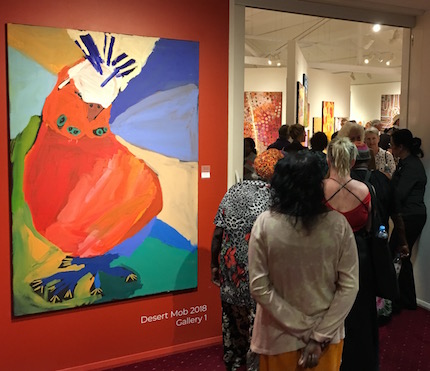 For the desert art centres, it will be a further blow to profile as well as income this year if their annual flagship exhibition, Desert Mob, does not go ahead. That is looking increasingly unlikely in the circumstances, but the picture will become clearer after Easter.

Left: Unlikely to happen this year, the opening night for Desert Mob 2018 – a knockout work by Karen Napaljarri Barnes in the foreground.

Some of Desert Mob’s features, like the symposium and the Desart Photography Prize, may still go ahead in online formats.

“We were going to be celebrating our 30 years, so it would be a shame not to do anything,” says Mr Watkins.

The emphasis will be on telling stories – the vital underpinning of the art and the art centres – using the digital audio-visual media that art centres are becoming increasingly adept in producing.

And in the interim, Desart’s focus is firmly on “trying to unpack what impact the shutdown is having on business and assessing how the business packages announced by government might help”.

Australia Council CEO Adrian Collette AM welcomed the announcement: “First Nations communities have a much greater reliance on income from arts and cultural activity, particularly in remote areas with art centres. Many art centres have closed their doors, effectively shutting off key revenue streams as well as vital health and community infrastructure. The  [funding] will address some immediate and urgent needs in this part of the sector.”