Government and council bicker over youth 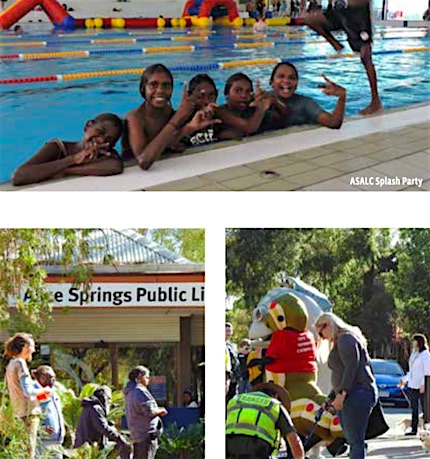 
The testy relationship between the Town Council and the Territory Government looks set to only get testier in the countdown to the Territory election.

Right: From council’s annual report, under the heading “inclusiveness & support”.

Mid-month, after hearing a fairly comprehensive account of government, agency and NGO efforts in the youth space from Commander Bradley Currie, council wrote to all MLAs “encouraging a community-driven solution to deal with youth matters in Alice Springs”.

In a polite but edging-towards-irritated response,  Territory Families Minister Dale Wakefield suggested council itself look to a more active role, expanding its activities such as Geek In Residence at the library, activities at the town pool and possibly other sporting facilities.

She also suggested council consider upgrading the Gap Youth Centre, as it is part council-owned and “in need of expansion and modernising”.

Mayor Damien Ryan, responding somewhat defensively at last night’s meeting, noted no request had come in from the GYC “in relation to the insinuation in the letter”. Council will nonetheless get a report on the state of this property.

Meanwhile, Councillor Eli Melky had proposed that council get a briefing from Education Minister Selena Uibo on the number of school-aged children not attending school in Alice Springs, in light of compulsory enrolment, attendance and the responsibility of adults in getting children to school.

His motion to that effect was seconded by Cr Jacinta Price and was carried by a majority.

Minister Wakefield that very morning had released the Mparntwe / Alice Springs Youth Action Plan, which drew attention to the very issues. It reported that 30% of youth taking part in recent surveys were “disengaged from school” (it is not clear how participating youth were selected) and identified a number of “action areas” addressing education, training and employment outcomes for these disengaged youth.

One of those is to “investigate opportunities for family support and mentor support for young people while they are at school”.

Further, today Ministers Wakefield and Uibo opened the Families as First Teachers site at Braitling Primary School. There are  47 FaFT sites across the Territory, 40 in remote or very remote communities, with the aim to get to to 53 sites by the end of next year. The program is about supporting parents “to contribute to their child’s development in the critical early years, from birth to age five, so they arrive at school ready and willing to learn”, according to a government media release.

Not quite the legalistic approach Cr Melky had in mind, with his references to the Education Act, the Child Protection Act, liability, mandatory reporting and accountability of parents.

After the vote on Cr Melky’s motion, Cr Marli Banks explained why she hadn’t supported it.

What council business does it speak to? she wanted to know. And what is the actual situation for young people? she asked, reflecting on the recent message of Cdr Currie which countered the narrative of nothing being done and no gains being made.

She was cautious of broad motions that looked like they were “politicising, headline-grabbing”.

Cr Melky objected to the “headline-grabbing”.

Cr Banks retracted, but maintained that there is a risk of issues being politicised in the election year ahead.

Meanwhile, Cr Jimmy Cocking had put forward another motion, seconded by Cr Banks, that council consider the government’s youth action plan and related documents and identify how best to support “a community-driven approach to public safety and youth engagement”.

This motion was also carried.

Cr Cocking said the work would look to build on what council is already doing, for instance at the library, and to develop plans to take to the Minister for funding.

No rush though, he said, council can do this work after summer.