What they were going to say when he's no longer there 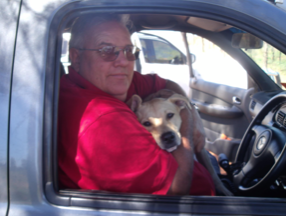 Last Saturday Alice Springs was at its best, with one of its best at the centre.

He was in a big hospital bed on wheels which was in the middle of a function room at the Lady of the Sacred Heart school’s Traeger Avenue campus.

He was propped up. People came up beside him, gave him hugs, chatted or read from pages of notes about a man who made a great life from a fate that would crush a lesser person.

Some had tears in their eyes but most of them laughed.

Relatives had come from Spain, New Zealand and Adelaide.

Some of the town’s movers and shakers were there, and people from an amazing range of backgrounds.

At one point someone brought in his dog who jumped up onto the bed. The man gave him a cuddle.

Odd? Not really, because the man is Jol Fleming, who wedded a gentle nature and lots of humour with a steely determination not let a tragedy beat him.

Saturday’s “living wake” was his idea: “He wanted to listen to the sort of comments that people only make when the person concerned is gone,” says Jol’s brother Adrian.

In October 1981 Jol was a passenger in a car that rolled. After eight months of medical treatment the cattle station worker and motor sport fanatic survived as a quadriplegic, with control of his body restricted to his upper body and the rear part of his hand.

Recalls Adrian: “He and his wife-to-be, Ann, were driving to Alice Springs to advance the planning of their wedding.”

The clients, from private enterprise, government and NGOs, were required to head out bush in their new jobs in The Centre, “on dirt roads, sometimes very poor ones. Many of them had never been off a sealed highway,” recalls Adrian.

“Most didn’t know how to change a wheel.”

The Alice Springs News quoted Jol himself on the subject in April this year. With typical fine turn of phrase, he said special training is doubtlessly required unless it is a “manicured road with a clay cap, nice and smooth, no wrinkles.

“We don’t have any of these in The Centre.”

He advised putting cars into 4WD on dirt roads even if there is no risk of getting bogged: “You have all four of them working.”

This would enhance safety 30% to 40% because it increases the directional stability of the vehicle.

“All the percentages add up,” Mr Fleming says. “Then there are preparation, tyre pressures and a string of others.”

His training style has become legend.

A former pupil, Suzanne Lollback, recalled on Saturday the hair-raisingly steep hill she had to drive up on day two of her course, with Jol watching from another vehicle, and in radio contact with her.

Two-thirds of the way up, and still wondering if she was going to make it, she heard Jol say: “When are you going to take the hand break off?”

Through his work he built up a huge network of people, says Adrian.

“He was also instrumental in the early years of off-road racing in Alice Springs, he was president of that club for several years.

“He is a CAMS-accredited referee for the Finke Desert Race.”

Jol formed a partnership with an Aboriginal landholder north-east of Alice Springs, Lindsay Bookie, a former chairman of the Central Land Council, organising tours from Jervois through the Simpson Desert to Poeppel Corner where the SA, NT and Queensland borders meet.

They pioneered the Hay River Track, including the Baton Hill bush camp, four days’ drive from Birdsville, “hot showers, lovely camping spots, big ghost gums, plenty of water,” as Adrian describes it. 520 vehicles have now been on that track.

On one trip a colleague had forgotten to buy cigarettes. Jol radioed a contact in Birdsville to take a few packets to Poeppel and bury them there in a tin.

As it turned out Jol reached the way mark ahead of the passenger whose fingers were pretty well curling by then.

The passenger frantically dug for the tin but when he opened it he found it empty. Jol, always ready for a prank, had done the switch.

He headed several expeditions west of Vaughan Springs along the Peter Edgerton Warburton trail west to the WA coast across the Gibson and the Great Sandy deserts.

Leading the convoy and controlling his big F250 fitted with enormous tyres with a knob mounted on the steering wheel, Jol stopped on top of a sandhill and radioed: “Guys, there is a huge lake here. Masses of ducks.”

“Of course there is nothing there,” recalls Adrian.

“He had us all worked up. That’s the kind of joker he is. Larger than life, always onto a giggle. Loving doing stuff with people, the more challenging the better.”

“He is supposed to be dying but he is very up-beat. He’s his usual demanding himself. I want this, I want that, I want you to get my truck ready. Check the oil and the tyres because I want to go for my last drive.

“His heart is going to stop beating soon but he just doesn’t give up,” says his brother.