A concert of hybrid culture celebrates climb down at Uluru 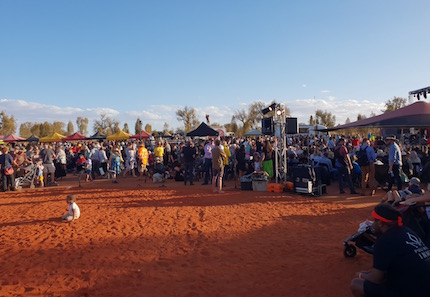 Some singers keep hybrid Australian culture growing. This was demonstrated at Mutitjulu last Sunday at the Rock celebrations with the Anangu Inma performances, Shane Howard’s  “Solid Rock” (“standing on solid rock/ sacred ground”), Peter Garrett’s  “Beds Are Burning”, Mutitjulu and Amata bands calling for attention to country,  the Central Australian Aboriginal Women’s Choir, blending sacred musical traditions – all  part of the light-hearted yet serious  celebration of the Uluru being returned from  a  Disneyland  fate to its silent composure. As Garrett said, “A weight has been lifted.”

The celebrations included a good hour of danced  ceremony verses from  Tjukurpa  – the Seven Sisters, Wati Niru, Kalaya. Thanks to Maraku Arts backup and care, a full spectrum of generations took part in remembering, teaching and showing these Tjukurpa stories at sunset.  There was vigour, generosity and attention to detail displayed by everyone.

I witnessed rehearsals, sound checks, backstage conversations and observed the easy relationships between bands, crews and Indigenous performers. It’s backstage where you really see what generous connectivity and respect there is in our Australian culture and it’s there also where the kids learn by helping create our mixed up  (hybrid)  emerging culture.

In the sound check period, Sunday afternoon, Maraku Inma performers and the Women’s Choir were around the stage when Shane Howard’s band practised “Solid Rock”. Everyone knew the words, spontaneously dancing in heart lifting delight. That was a heart-stop,  tear-jerker moment.

The same thing happened when Garrett’s band and Nicholas Williams  (son of Warren H. Williams) and five of the Women’s Choir joined in the sound check chorus of  “Beds are Burning”. Everyone knew the words and the moves. That too was a sign of how much person-to-person recognition and reconciliation has been going on underground for a long time. We don’t need long speeches.

I did note in the night performances, though, that we do need to keep space clear in front of the stage so the kids  (black and white) can get in there and dance and not be pushed out by the pressure of excited white people pressing up to the stage. It’s too easy to forget the kids beneath our feet.

There were a lot of people there that night and I was thinking – what does everyone make of those words, sacred ground? 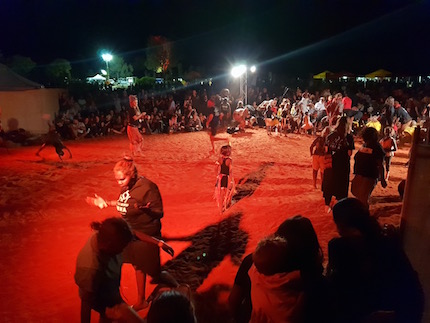 Uluru and surrounds is really an encyclopedia of pragmatic human knowledge and imagination.  Ever since homo sapiens  began to talk and walk our brains have fused with landforms as sites for remembering, recording facts of life and survival as well as  the  drama and poetry of  nature and human relations.  Before writing began, the map for the human mind was the country, seas and stars.  That map you had to work into your body memory or perish.  Anangu are doing that still.

In hunter-gatherer times it seems that the experience of ‘reading country’ helped form all of our human brains, right from the beginning.  This, I think, is why Anangu want to keep the book of the country open for their kids. Contemporary research is beginning to understand this.  Matteo Meschiari, for example, in a recent article, “Terra Sapiens, How Landscape Invented Man”, looks into how the human brain formed during the two million years that our ancestors lived with the land, migrating all around the world. Walking country made the human brain.

People talk about Uluru as being a sacred place, like a cathedral, and that might be so.  Uluru does deserve love and care as an awesome geological formation that sets going deep feelings. However, that solid rock is also a node in the land for learning.  When you start decoding the Tjukurpa you discover how much of it is the way of teaching the facts of life. The reason for keeping the Rock open and alive is because it’s a brain node in a countrywide network of knowledge, cultural history, kinship mathematics and ecosystemic facts.

So thanks to all those who negotiated the climb down and thanks to all the musicians and dancers who came together last weekend to celebrate lifting some of the weight of worry off the back of  Uluru.

Photos of the performance ground, before and after.