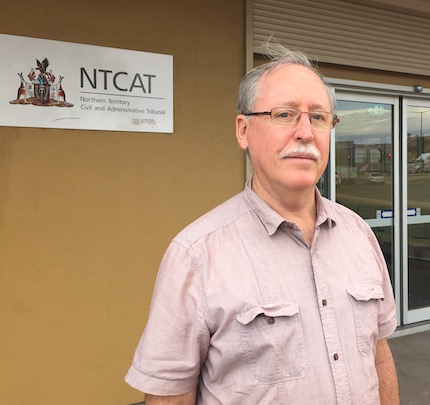 UPDATE, 18 October 2019, 11.22am: In reasons published today, Mr Bruxner says the NTCAT review sought by Mr Nelson would have “at least an arguable prospect of success”. See at bottom.

UPDATE 2, 18 October 2019, 2.18pm: Mr Nelson has relinquished his tenacious fight to save the school, in whose fate the public has been denied a say. It’s up to others now, he says in his letter to the editor.


President Richard Bruxner of the NT Civil and Administrative Tribunal today declined to order a halt in demolition works at the old Anzac Hill High School.

He was considering the issue as a logical extension of the application by local historian Alex Nelson (left) for a review of the Heritage Council’s decision not to recommend listing of the school. There would be no point pursuing that review if the school had in the meantime been demolished.

Undeterred, Mr Nelson will now attempt to get an injunction in the NT Supreme Court. The clock is running down to Monday, when demolition proper is due to start, with heavy machinery procured by the contractor en route.

Work this week seems to have been limited to the removal of asbestos, furniture and fittings, with the structure still intact.

Mr Bruxner will publish reasons for his decision as soon as possible, but said in broad terms that the “balance of convenience” was not in favour of ordering a halt to the works.

This seems to refer to the detriment that would be suffered by the Territory Government and third parties (the contractor and subcontractors) as well as the lack of an undertaking by Mr Nelson to pay their damages and costs should his application fail.

The government’s legal counsel, Lachlan Peattie, cited authorities to the effect that it is “almost a matter of course” than injunctions will not be granted without such an undertaking by the applicant. He noted also Mr Nelson’s “absence of capacity” to enter into such an undertaking.

The damages and costs at this stage would be considerable, a consequence, he argued, of Mr Nelson’s decision to make his application so late.

Mr Bruxner questioned Mr Nelson closely on the chronology of events that led to this being the case.

The window for applying to the NTCAT is normally within 28 days of the relevant decision, in this case, the decision by the Heritage Council taken on 30 November last year and formally communicated to Mr Nelson on 14 December.

Why should he be granted an extension of time to allow his application to proceed?

He was frank in conceding that he had waited for the conclusion to this “extremely serious course of action” before applying to NTCAT. However, Mr Peattie made the point that the two bodies focus on different matters, the ICAC on corruption, the NTCAT on merits reviews of decisions. The two processes could have run concurrently.

The ICAC investigation was only revealed to the parties in August and September. Once it became known, the demolition process was delayed, said Mr Peattie, which has exposed the government to liquidated damages. The contractor, McMahon’s, has notified the government that it will pursue those damages.

Mr Bruxner has not made a decision yet on an extension of time to allow the application.

His decision against ordering an injunction is not a reflection on the potential for the application to succeed.

Mr Peattie attempted to pour cold water on the case Mr Nelson had made for heritage listing of the school. He mentioned for instance the involvement at the school of “a pastor”, of whom he had never heard.

Mr Bruxner also said, more than once, that on the basis of his reading of the assessment report and of the evidence from the independent expert sought by the ICAC, that it seemed to him that the Heritage Council could have proceeded to recommend heritage listing.

Had it done so, the Minister would have been obliged to make a provisional declaration of the school as a heritage place while public consultation on the nomination was undertaken. During this period no demolition or alteration works could have taken place.

Mr Nelson remains passionately convinced that the demolition of the school represents an “enormous potential loss” to the town,  as he told Mr Bruxner, and the public should at least have the opportunity to participate in a decision about its fate.

Mr Nelson said that the ICAC’s report of its investigation of his complaint had only strengthened his case and his resolve to have resumed a process that would lead to public consultation on the matter.

In the published reasons for his decisions yesterday, NTCAT President Richard Bruxner explains (in paragraphs 28-31) what Mr Nelson’s application requires of the NTCAT and offers his view of its prospects:-

The tribunal’s task in such a review would be to put itself in the shoes of the Heritage Council and to make a determination as to whether or not the school is a place of heritage significance. That question would be determined according to the heritage assessment criteria set out in section 11 of the Heritage Act 2011.

My present view – which has nothing to do with the procedural irregularities of which the applicant complains [which have been dealt with by ICAT] – is that a challenge to the merits of the 30 November 2018 decision, if allowed to proceed, would have at least an arguable prospect of success.

I first note in this respect that the assessment report considered by the Heritage Council on 30 November 2018 (notwithstanding that the applicant has complaints about the accuracy of some matters in the report) seemed to me to be favouring a finding of heritage significance.

Secondly, I note that the ICAC investigation appears to have involved the obtaining of an independent expert assessment (which, I stress, I have not seen) to the effect that the school does have heritage significance.