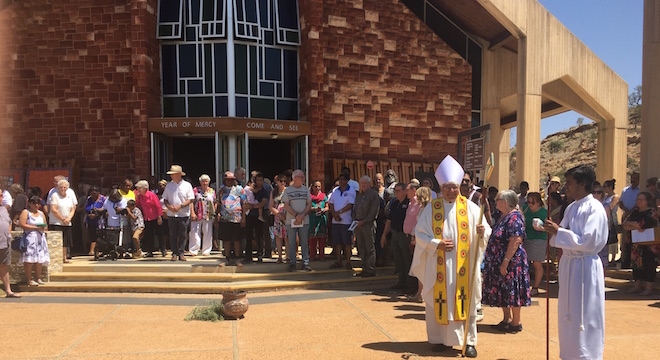 Above: The faithful, including Bishop of Darwin Charles Gauci, gather last Saturday for an Arrernte smoking ceremony before entering the church for the unveiling.

A stained glass window created from a painting by well-known artist and senior Eastern Arrernte woman Kathleen Kemarre Wallace was unveiled in a special ceremony on Saturday, marking the 90th anniversary of Our Lady of the Sacred Heart parish in Alice Springs, and the 50th anniversary of the church building.

“Jesus was given for everyone, Aboriginal people included,” says Mrs Wallace. And as he was dying, he gave his Mother “to all people”.

Her painting too is for “all people”, as she emphasised when she spoke on Saturday.

This message was reiterated by senior Arrernte woman Felicity Hayes, speaking before the smoking ceremony.  People of Alice Springs “should live in peace,” she said, “and be a community that understands each other whatever our cultures are.”

Left: The window design, image courtesy the artist and OLSH.

The title of Mrs Wallace’s painting is Urtakwerte Atywerrenge Anthurre / Very Sacred Heart.  In it she shows Mary and Jesus standing on a sandhill, with light pouring from the open hands of Jesus: “The light is there for people to follow.”

While Jesus gives light to the world, his Mother gives love and together they wait for the faithful to come, as shown by the tracks at the bottom leading to where they stand on the hill.

The two figures are painted up with body designs, in the way of Arrernte ceremonies, as Mrs Wallace recalls: “All the people joined together singing and dancing for celebration night after night. These were happy times and important events. Men and women and children took part. This painting is about celebration. It is praising God, Aknganentye.”

The eight Arrernte skin groups, Anpernirrentye, which Mrs Wallace sees like Eight Commandments for her people, showing them “how to live a good life,” are represented in the double-U shaped designs around Jesus and Mary. 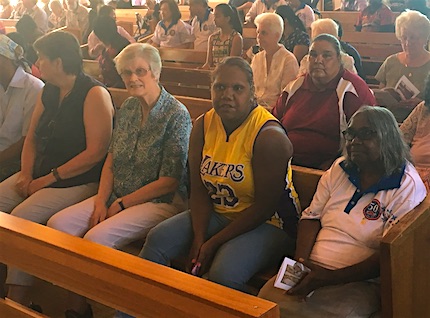 The large circles at the top represent the Christian Trinity but also reflect a dream of three circles, given to her grandfather – Arrenge, Akngeye, and Utnenge,  grandfather, father and totem spirit.

Right: Artist Kathleen Wallace at the end of the front pew, ahead of the unveiling ceremony.

Everything  has meaning in this unique fusion of Christian and Arrernte spiritual understandings, where the Land is our mother, likened to Mother Mary, giving us what we need. The dots “represent everything in the world”, right down to the smallest seed, and the world in turn, where we all live, is represented in the large circle surrounding the Cross in the centre behind the figures, a design Mrs Wallace was given by her grandfather.

The artist’s characteristic style, with its graceful abstracted figures and intricate colourful designs, combined with the clarity of her vision for the work, made it particularly suited to such a project. 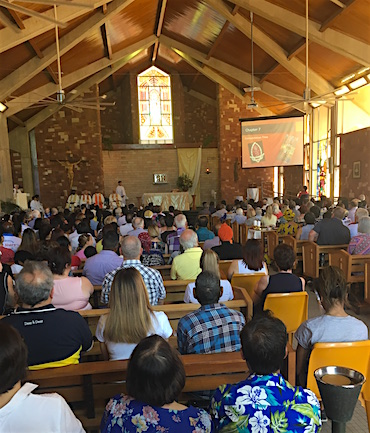 Its translation into the stained glass medium used contemporary techniques, with the original painting photographed segment by segment at very high resolution and then printed to scale on transparent film which was then sandwiched between two layers of glass.

Left: The congregation attending Mass on Sunday, with the window high in the western wall, above the altar.

The process was coordinated by Peter Toyne and carried out by a design and construction team. Mr Toyne, a former MLA in the Centre, is now a full-time artist and based in Victoria.

Saturday’s proceedings were attended by Bishop of Darwin Charles Gauci, Chief Minister Michael Gunner, and Alice Springs Mayor Damien Ryan among other dignitaries and members of the congregation. Michael Sitzler was also there, representing Sitzler Brothers who built the church 50 years ago.