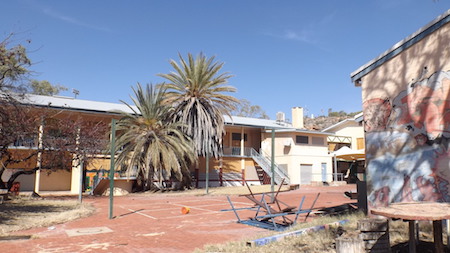 Ken Fleming, who heads up the Independent Commission Against Corruption, has severely criticised advice given by senior officers of the Department of Infrastructure, Planning and Logistics to its Minister, Eva Lawler, who decided to go ahead with the demolition of Anzac High (pictured).

He told ABC Radio the process appears to have fallen well short of the best tradition of the Westminster system: “Cabinet acts upon the best information from their executive officers. Otherwise there seems to be a breach of public trust.

“I’m inclined to go back again for that information which may raise other issues.”

The interview with Mr Fleming was broadcast by ABC Radio in Darwin on Friday. This is part of what he said about the first decision of the newly-formed ICAC, triggered by a complaint about the process seeking heritage listing of the building.

That complaint by local historian and Heritage Council member Alex Nelson was not upheld by the ICAC.

But Mr Fleming was commenting on a statement by a senior public officer who claimed the building is “unsafe and is beyond economic repair. The current structure poses a risk to public safety. It is important that this site is cleared to ensure the risk is mitigated”.

Mr Fleming said: “We wanted to know upon what basis that statement was made.

“When we asked we were told, for example, that the evidence supporting this was the department’s technical officers had in depth knowledge of the facility [and] that it was not constructed to current building standards and to [upgrade it] to today’s building standards was considered to be cost prohibitive.

“In the heritage listing expert report it said the buildings were in good condition, and yet we find a statement by a senior public servant saying it is in fact unsafe and beyond economic repair.

“We simply asked for materials supporting that statement,” said Mr Fleming in the ABC interview.

“We were told simply that technical officers had in-depth knowledge.

“[He quotes] ‘We considered the technical advice by technical officers adequate to form the view that the facility was not economically viable to re-purpose the facilities to a standard that would deliver best use of this strategically located CBD site.’

“We have no issue with the fact that the government wants to repurpose the site. The issue that we have is the integrity surrounding the decision making process.

“We had two conflicting reports.

“We simply wanted to see the material upon which that statement to the public by a senior public servant was made.

“We got … that it was all oral. We expected some rigour to be around the decision making process. For example, we expected to see something at least in writing. But the department produced nothing apart from [a] letter from which I just quoted plus a subsequent one which is a half page.

“Therefore it is critically important that the executive officers bring rigour to the role that they perform so that we, for example, can see a trail of decision making, matters documented, and the like.

“That seems to me to be required. Otherwise there seems to be a breach of public trust.

“We put trust in these people to make appropriate decisions,” Mr Fleming said.

“Our argument is not that the government wants to demolish the building. Our argument is with the processes by which public servants determined matters.”