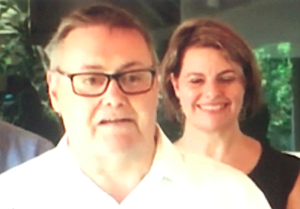 Just as Town Council negotiations with the NT Government for major projects in the town – the Aboriginal gallery, the CBD revitalisation –  are reaching a crucial stage, Mayor Damien Ryan (pictured, ABC News), with half of his four year term still to run, is pitting himself against that very government.

His ambition, on the side of a two-person CLP Opposition, is to be one of 25 voices in the Top End dominated parliament, instead of heading up the nine council members elected to serve the interests of Alice Springs. 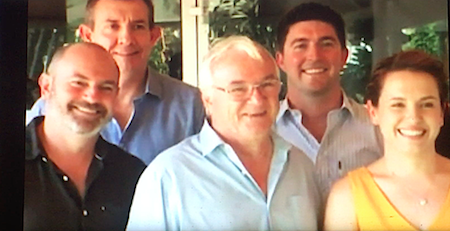 The fact that the CLP preselected his son-in-law, Joshua Burgoyne (pictured, second from right), for the only other urban seat here shows the limited depth of the talent pool of the party that once ran the NT for decades.

Pictured at left in the photo is Bill Yan, endorsed for Namatjira. ABC News.

Mayor Ryan winning Araluen is by no means certain: In the wake of the annihilation of the Adam Giles CLP Government, and the still unfolding Michael Gunner ALP fiasco, voters could well be looking elsewhere to place their votes other than with the two “major” parties.

Araluen’s Robyn Lambley was returned as an independent in the last election  against well-known CLP figure Steve Brown.

Most Labor preferences flowed to her, delivering a two candidate-preferred vote of 2604 to 1873 in her favour.

In the Legislative Assembly she has managed to maintain quite a strong presence, notwithstanding the atrociously unfair allocation of public money for staff salaries to independents which currently outnumber the “Opposition” about three to one.

Ms Lambley, asked whether she is going to stand again, says: “At this stage anything can happen in 11 months.”

After injudiciously backing Michael Gunner on the location of the Aboriginal gallery in the Anzac Hill precinct, Mayor Ryan was forced to retreat in face of widespread community opposition.

Since then, the behind-closed-doors style of decision making he favours has left the ratepayers in the dark, from the get-go, about where their council stood on the gallery issue.

They should rather have witnessed their elected local government being in the driver’s seat, insisting, as a first step, on meaningful consultation with the people whose culture is going to provide the very art for the gallery, rather than allowing the dog’s breakfast of government planning to unfold.

Ratepayers equally know next to nothing on the CBD revitalisation plans.

Being frank and open is not Mayor Ryan’s forte: The Alice Springs News emailed him on February 18: “I’ve heard from a usually reliable source that you have joined the CLP. True?

“The source also says you have your eye on the NT seat of Braitling. True?”

The public deserved an answer to these questions but did not get one.

Given the delicacy of council vs government relationships about the gallery, the proposed sale of the civic centre, let alone the many millions of public dollars involved, a compromised Mayor should not be anywhere near the deals, and he needs to resign.

Because of the statutory time frame about council vacancies this would trigger a by-election.

Alternatively, we can stand by and watch Mayor Ryan use the opportunities of his $100,000 a year position to campaign for his election in another tier of government.