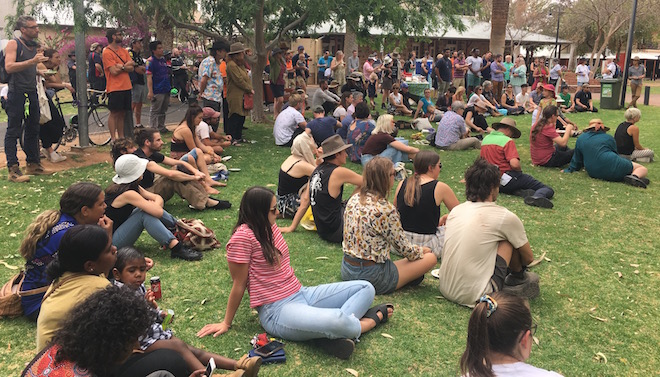 By lunchtime today some  57 businesses had registered with organisers of the Closed for Climate business strike.

Some had opened their doors late, so they could support the students this morning, some at lunchtime, to attend the action’s Sustainable Barbecue (camel burgers donated by Milner Meats). Others closed for the whole day, throwing themselves this afternoon into planning the forward momentum of this movement. 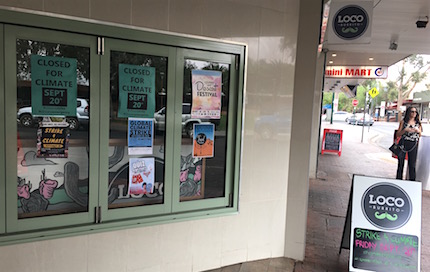 “It’s a big decision, especially when you’re closing the doors for something seen as political”, said Kim Hopper, one of the partners of Duyu Coffee Roastery and a key organiser for today’s event.

Left: Loco Burrito on Todd Street closed for the day.

It can be hard as a business owner to know how to get involved, she said, but she had long ago heard that to affect change, you start from where you are. So she reached out to Duyu customers: six businesses they deal with came on board in the first week; there were 12 by the end of the first fortnight.

She didn’t have to work hard to convince them: “The NT Government did that for us by paving the way for fracking.”

Prominent domestic violence campaigner Shirleen Campbell spoke to the gathering as a town camper, on behalf of Tangentyere Council, the corporation and its individual members, she said. 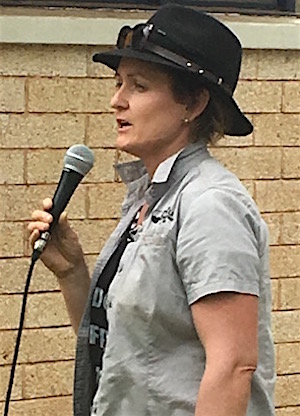 Town campers are worried about climate change, particular the warming that’s being experienced, she said, pointing out that last year there were 55 days over 40, 129 over 30.

Their houses don’t have split system air-conditioners and aren’t well insulated. They use prepaid meters for electricity and can’t always afford to keep power running.

They want their houses powered by clean, cheap, reliable solar.

When we have so much sun, why do we continue to burn diesel? she asked. When water is so precious why would we consider fracking?

“Some people come and go, for us it is forever,” she said. And ultimately, “there is only one planet”.

Town campers feel sorry for those who are losing their homes because of climate change and rising sea levels: “That could be us, Aboriginal people losing our homes. For us it won’t be the seas, but heat and drought. We can’t let this happen, we’ve got no other place to go.” 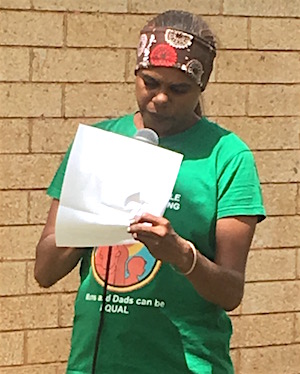 She compared housing on town camps in the pre-Intervention days, when work with the organisation Health Habitat meant they had “good hardware to support good health” – insulation and shade, solar hot water, and potbelly stoves for winter.

Some residents buy cheap fan heaters, which she said aren’t good for people with asthma, are expensive to run and bad for the environment.

Many town campers suffer ill health, including diabetes and cardiovascular disease. They are the ones who will be most hurt by the warming climate and and energy insecurity.

In the hot weather “our people look for comfort in air-conditioned public places”, she said, although they are “not always welcome and sometimes there are problems”. 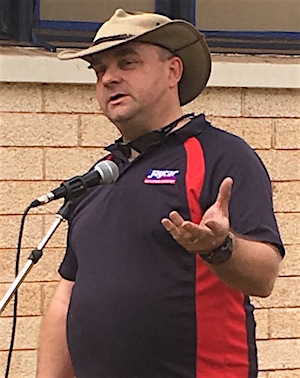 “We are thankful for places like the library, it’s our second home, and the pool.”

Town campers want houses that are “right for this place and right for our people”, but most of all, they want people “to treat this place as a legacy to be handed down to our children and grandchildren. It is not a speculative commodity, and it is not something to be sold or exported. We have been here for a long time and we want to look after this place for those who come after.”

Hunter Murray, from Alicetronics-Jaycar (at right),  had been inspired by a screening of Damon Gameau’s film, 2040, which focusses on convincing people that they can make a difference to the climate crisis, to achieve a healthier planet by 2040.

“There is no excuse”, said Mr Murray, “why we can’t do what we should be doing.

“We do have the facilities, we’re a rich nation, we can afford it.”

He dismissed the federal government’s argument that Australia doesn’t have to do heavy lifting because we contribute only one per cent of global emissions:  there are 60 countries producing one per cent of emissions, so if everyone cuts their one per cent, that would make up 60 per cent of the total, he argued. 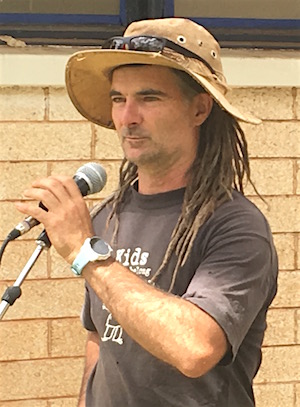 Rodney Angelo is a food producer known as the Happy Farmer NT, with a market garden on Ragonesi Road. He referred to the recent visit to Alice of Craig Reucassel of War on Waste fame, and his stress on the importance of food waste recycling.

Mr Angelo (at right) has been recycling food waste on his farm for the last four years and is now inviting all businesses and organisations that generate food waste to drop it off there; alternatively, for a fee, Happy Farmer will pick it up.

Sarah Brown, CEO of the Purple House, spoke of the long fight this service waged to get people back on country for dialysis. For the last 15 years, they have helped many to achieve this.

That is now compromised by climate change, she said. They are seeing reduced water quality (a critical issue for dialysis) and as temperatures increase, it is harder and harder for them to keep people on dialysis on country.

She said communities are worried that they might be forced off the land they fought so hard for.

“It is an emergency for remote communities,” she said. 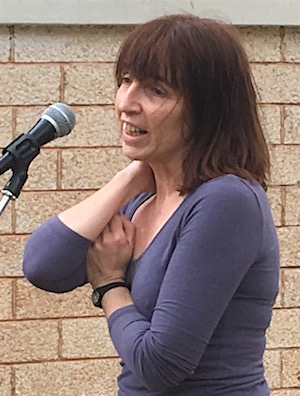 Musician Shon Klose worked for many years making music with young Aboriginal kids in remote communities. She has stopped doing that, now running a healing business in town as a massage therapist. One of the reasons for the change, she said, was the impact on her own health of the much harder conditions she was encountering out bush: hotter, dryer; awful roads; terrible water quality – bad for her, let alone for people with kidney issues and diabetes.

She too spoke of the film, 2040:  there are some amazing solutions out there, but implementing them will take a huge commitment, she said, including letting go of what makes our lives privileged and easy.

Do we have the tenacity to do that? she asked.

James Young and Elliat Rich run the design business, Elbow Workshop. Mr Young made a point about their business benefiting from the cultural identity of Alice Springs, but they are mindful of the responsibility that comes with that, as well as the opportunity for example: doing business and taking climate action in an extreme part of the country, there’s power in that, people will take notice.