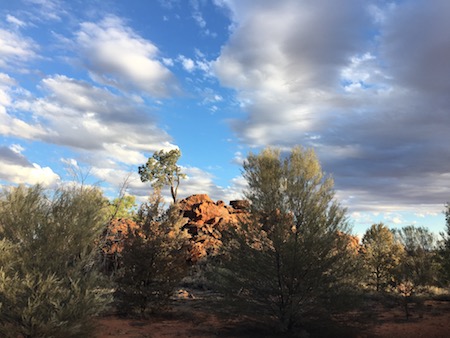 We emailed the Australian Federal Police (AFP) at 11:19am on July 15 asking whether it was true that a group of tourists had been spied on by officers at a public reserve near Pine Gap, and whether a drone had been used.

On July 18 at 5:16pm, three days and six hours later, AFP Media replied: “Despite how many times you want to change the word from ‘confronted’ to ‘encounter’ to ‘chat’ or potentially to ‘waved at some tourists in a passing’ car, the simple fact is we did not meet, encounter or stop a group of people and either ask what they were doing, where they were going or demand their identification. Sorry, but we are not going to spend any more time on this wild goose chase.”

This was the first statement that the incident had not taken place.

We have since learned from our informants that identification was not asked for, but they insist that were asked what they were doing. This came after they observed a drone overhead, which they presumed was surveilling them. The News further provided the AFP with the date of the encounter.

The AFP had more than seven hours between our first contact and publication of the report, plenty of time for an organisation expected to be capable of a fast response. Their response would of course have been part of the report.

Their message now is simple: “It did not happen.”

We have since raised the issues with the Department of Defence which is declining to comment.

The first AFP response to our questions was that “AFP members did not request identification and information from anyone in the vicinity of Pine Gap as alleged in your questions. The claims are not true.”

Hang on, what’s the point of denying something has happened at an encounter that didn’t take place?

In between the AFP had asked: “Do you have a firm date for when this happened? It will help our guys with tracking down who was on shift at the time.”

Hang on – a firm date for an encounter that never happened?

A further AFP query: “We [are] still trying to find out if there was an incident as alleged. Have you spoken directly to anyone in this group of tourists? And how many people were there?”

So there could have been an incident, could there? The following day the AFP insisted there wasn’t one.

Was the AFP just angling for something?

As we have faith in the reliability of our informants, and there is evidence of a string of  earlier intrusive encounters with people visiting a conservation reserve open to the public (see readers’ comments to our original report), we have asked the AFP and Defence whether the surveillance of Kuyunba is carried out by an entity related to the spy base other than the AFP.

Defence stated: “We understand that the Australian Federal Police provided a response to your questions on Thursday, 18 July. Defence has no further comment” – thereby putting the seal of approval on the APF’s inept handling of the issues.

We will keep you posted!