Electorate changes: no guarantee for consistency

The Northern Territory is undergoing a redistribution of Legislative Assembly electoral boundaries as mandated by the Electoral Act 2004 and the NT Self-Government Act.

This process starts in every term two years and six months after each preceding general election day.The current round commenced on February 27 this year, with the first proposed redistribution published on May 13 and objections to it closed on June 14.

We now await the publication of the second proposed redistribution.

The Redistribution Committee’s first proposals had some notable changes for electorates in Central Australia.

Chief among these was the disappearance of Stuart and the creation of a new seat “Gwoya” stretching over an immense area from the South Australian border all the way to the Joseph Bonaparte Gulf along the remote western side of the Territory. 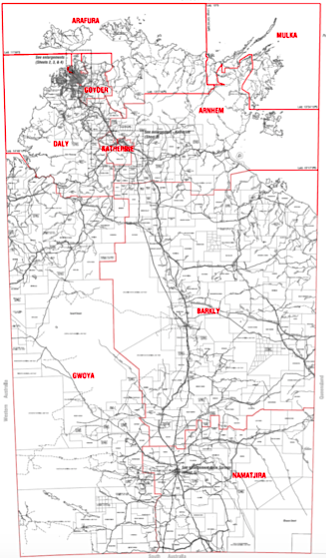 The seat of Namatjira is equally radically different, contracting to the southeast corner of the NT and surrounding Alice Springs; including urban patches of the town.

Meanwhile, Barkly expands in size towards both the north and south.

Alice Springs is divided between Braitling and Araluen along an east-west axis running mainly along Larapinta Drive, Stott Terrace and Sadadeen Road.

Despite these significant changes, especially for the bush seats, commentary and criticism was substantially muted.

The most strident opposition to the boundary changes came from Chansey Paech, the Member for Namatjira, who contended there is serious under-representation of constituents in remote areas due to a systemic failure of voter enrolments and inconsistencies in taking communities of interest properly into account.

He especially highlighted the desirability of “keeping indigenous language groups together [as] a top tier consideration for the [Redistribution] Committee”.

In addition, Mr Paech was critical of the increased urban ratio proposed for the re-adjusted boundaries for Namatjira, which includes disparate portions of Alice Springs quite separate from each other (west end of Larapinta, Mt John Valley, Lovegrove Drive / Morris Soak, and the light industrial area to the north).

This is certainly a unique prospect; in previous distributions there have been instances of rural or bush seats incorporating single discrete portions of urban Alice Springs but never several areas from different parts of the town.

The name of “Gwoya” received most attention from objectors. The most strident opposition to the boundary changes came from Chansey Paech, the Member for Namatjira, but otherwise there has been a general acceptance of the concept of remote bush seats aligned along a north-south axis rather than east-west as it has been since 1974.

Yet there is nothing new about the concept.

At the start of the redistribution process in the previous term of government (during 2015), the Country Liberals Parliamentary Wing under Chief Minister Adam Giles made a similar proposal.

It was proposed the seat of Stuart extend along the NT’s western border from South Australia to the Joseph Bonaparte Gulf in the Top End, roughly similar to the current “Gwoya”.

The CLP Government also proposed to abolish Namatjira and replace the whole eastern half in Central Australia by extending Barkly to the SA border.

In effect, the southern two-thirds of remote and rural NT was proposed to be split in half on a north-south axis.
(The Country Liberals party wing also put forward its own submission but this was significantly different to the parliamentary wing).

The Giles Government’s concept to some extent echoed Labor’s original suggestion in 2000 for two new Federal electorates, which simply split the NT into two halves either side of the Stuart Highway from top to bottom.

However, the first occasion in which a north-south alignment of bush seats in the southern NT was suggested (to my knowledge) was in fact made by me in January 1990; and this is where we seem to have come full circle.

My concepts for the southern two-thirds of the NT in 1990 were adopted in both the CLP’s parliamentary and party wing submissions to the Electoral Redistribution Committee. 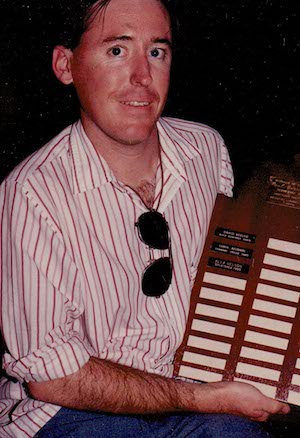 What is most astonishing now is that my suggested 1990 boundary changes for the bush seats in the Centre are virtually identical to the current first proposal in 2019.

AT LEFT: Alex Nelson was the CLP Member of the Year in 1990 but his electoral redistribution ideas fell on deaf ears. Now very similar proposals are put forward as the best solution.

The new seat of “Gwoya” now is matched in the south by my idea of “Tanami” in 1990; likewise the current proposal for Namatjira is barely discernible to my proposal to expand the former urban and rural seat of Flynn almost 30 years ago.

To say the least it is an extraordinary coincidence over a separation of almost three decades yet there is equally a striking contrast between the two sets of proposals, too.

Having devoted a good deal of effort and time on behalf of the CLP’s two submissions in 1990, I went in to bat for my proposals in front of the Electoral Redistribution Committee on March 29 that year.

With a set of six pages of hand-written notes in point form, I argued the merits of my case on the over-riding basis of quotas of electors but also taking into account communities of interest, precedents and trends, serviceability and costs, and other considerations.

A major difficulty that I wrestled with for my proposal of “Tanami” was its northern extremity which, try as I might, could not avoid the inclusion of the Wave Hill and Kalkaringi area from the (then) seat of Victoria River. I considered this part to have a much closer affinity to the Victoria and Daly River region than to the southern Tanami.

However, I reasoned that this section came under the control of the Central Land Council which had just posted staff there as part of a regionalization policy so my proposed electoral boundary matched that reality.

The Electoral Redistribution Committee flatly rejected my contention; and it also found no favour in my proposed expansion of the Flynn electorate including retention of that name for such a drastic boundary alteration.

It was clear my suggested electoral boundary changes had no chance of acceptance; and this was on top of strident opposition to the CLP’s proposals based on my ideas that came from the Labor and NT Nationals parties, too.

What a striking contrast to the contemporary situation!

For example, the proposed seat of “Gwoya” extends far beyond to the north of my old “Tanami”, incorporating the Victoria River region all the way to that river’s mouth to the sea.

Similarly, the Redistribution Committee proposes to radically alter the seat of Namatjira, virtually identical to my extension of Flynn 29 years ago, yet has no problem in retaining the current name (which ironically would exclude Hermannsburg, Albert Namatjira’s birthplace and home).

Today’s Redistribution Committee is a four-person panel (since 2004) including the Electoral Commissioner, Surveyor-General, Auditor-General, and an appointed member to act as Chair (currently NT Supreme Court judge Trevor Riley).

Before 2004 the Electoral Redistribution Committee was a three-member panel comprised of the Chief Electoral Officer, Surveyor-General, and a person appointed by the Administrator to act as Chair.

In early 1990, it so happened, the committee’s Chair was Commodore Eric Johnson, previously NT Administrator until late 1989.

We are assured on its website that today’s Redistribution Committee ensures “a fair, impartial and transparent process, free of political interference and with several opportunities for public participation”.

No-one had any significant qualms about the Electoral Redistribution Committee in 1990, too.

Following the final boundary changes revealed in late May (when the Alice first lost a seat to the Top End), local politicians of all sides concurred the new arrangement was fair (“Boundary changes equitable”, Centralian Advocate, 30/5/90).

The Redistribution Committees of 1990 and 2019, notwithstanding different Acts under which they operated, nevertheless were (or are) required to decide electoral boundary changes under the same principles.

Yet clearly it’s evident from the diametrically opposed positions the respective committees have taken towards virtually identical proposals in the Centre that adherence to these same principles, far from being consistent over time, in fact lead to quite arbitrary results when electoral boundaries are changed.