Above: People power comes to council on the national Aboriginal art gallery location proposal. Photos from our archive.

It’s about the half-way point for the current Town Council, a good time to gauge what has been achieved and what needs to be. It’s a time when the government under whose legislation council operates is in diabolical financial strife. Is that a logical time for the “government closest to the people” to flex its muscle or to retreat to rates, roads and rubbish?

It comes down to this: Do we want a Big Council or a Small Council, the theme for this series of articles quoting councillors and other significant members of our community.

A Big Council would resolutely seek to influence the governments in Darwin and Canberra, on the simple premise that it has nine elected members and the is no policy affecting the town – including state and Federal – in which it does not have a vital interest.

A Big Council would strive – amidst other tasks – to complete the Outback Way, divert tourists back from The Rock, recycle waste water, shift the rubbish dump (leave transfer facility where it is), put an end to juvenile delinquency, develop the West and East MacDonnells as the key commercial assets of the town, turn car parks into tourist playgrounds and get locals to walk or cycle to work, impose punitive rates on empty Mall shops, stop the risk of disastrous flooding, step in whenever the NT Government of either persuasion lets us down.

Some of these actions would be a responsibility of the council but others would cut across other tiers of government – yet should the council not only be heard, but have the equivalent to decision-making powers?

A Small Council, well, would do things like planting trees on median strips and agonise for months over no brainers such as flying the Aboriginal flag on Anzac Hill.

We started the series by interviewing Rex Mooney, the retiring CEO, who outlined what the council can do – if it wants to. 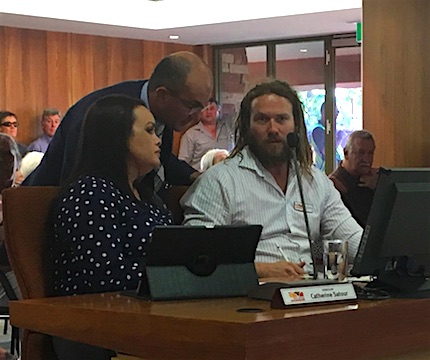 Outspoken Cr Jimmy Cocking, who also stood for Mayor in the last election, is speaking out today, clearly a Big Council fan. (He is pictured at right with Crs Catherine Satour and Eli Melky during a public meeting about the national Aboriginal art gallery. Photo from our archive.)

He spoke with Editor ERWIN CHLANDA.

I put to him that the council does not have the power to influence decisions such as building the railway overpass south of town and the upgrade of the North Stuart Highway ($24m and $10m, respectively), utterly unnecessary in what seems to be the view of a majority.

“The council is consulted as a stakeholder,” says Cr Cocking. “The council should have more influence in that space.”

He says the town masterplan he has put before the council operates in that “space” – dealing with issues usually left to the NT Government.

“The council should have more influence. Part of my platform is looking at how the levels of government, business and social services can line up and plan for where we want this town to be at in the 2050s.

“Some of the major infrastructure projects you mention may be premature and some other projects may be more important.

NEWS: What strength do you think rests in the following argument, vis a vis the NT Government: The Town Council has nine elected members who represent the people of this town. They have particular views. The NT Government may have the power to act against them, but do they have the moral right? The council could exert significant political influence at Territory election time.

COCKING: The moral right of governments are to work in the public interest. Given the power imbalance in the hierarchy of government and we are a product of the Local Government Act, we are bound in many ways. Council should be free from politics but it is unavoidable as Councils do play a springboard role for many political aspirants. Sometimes they become members of parliament and even Ministers. It will be interesting to see how many sitting Councillors run in the Territory elections next August.

NEWS: So how can you represent the people vis-a-vis the government?

COCKING: By having local government recognised in the Constitution. At present we exist under an Act of the NT Government. We would then have more opportunities for engaging directly with Federal Government, to make sure the needs of our community are heard in Canberra. We would also have the opportunity of working regionally with other local governments, influencing – for example – how Federal infrastructure money is spent.

NEWS: Would that opportunity of interaction apply to the NT Government as well?

COCKING: I imagine so. We are doing a good job of sticking up for our community, whether it’s things like the Aboriginal art gallery or the sports’ facilities upgrades that the NT Government has funded.

Cr Cocking describes the still unresolved gallery issue as a “challenge”.  Some issues require an “art of the possible” approach where politics, people’s pet projects come into play: “There is no blueprint.”

But the process of developing the masterplan in consultation with the community, over time, would make it clearer where the people stand, on a variety of issues.

The recent Barkly regional deal, emerging from the horrendous rape of a two-year-old, “is creating a whole lot of opportunities to make Tennant Creek a safer and better place”.

NEWS: At the moment there is no consensus in council. It’s five against four. 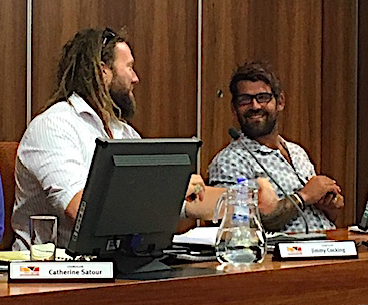 COCKING: Not necessarily. (At left, sharing a light moment with Cr Matt Paterson.)

NEWS: There are many big issues in which the government is failing.

COCKING: There are things we should be more engaged in. It goes back to the council having that masterplan, get the NT Government to sign on to it, and present to the Feds a model for developing the region in a sustainable way rather than being exposed to the whims of politicians or business people, who have individual projects that don’t necessarily connect, and expose us to the booms and busts of a single projects economy.

NEWS: What about the flagrant waste of water in the sewerage plant? Recycling, which is done all over the world, could free up two square kilometres of pristine land within minutes of the CBD, at what is potentially the national crossroads for air, road, rail and data, and get national or international money to build an IT centre or a education village?

COCKING: Council may play a role in each of these areas – recycling more than the others, but we can definitely play a role in influencing, advocating for and working collaboratively. Having the ear of government helps if you have it. There is a lot of opportunity. That is a conversation we’ll be having in October, November, including the money that council could contribute, put skin in the game. You’ve got to have a prospectus, a plan. That’s what I’ve been talking about since I’ve been on council.

NEWS: When in Alice Springs has people power, as wielded through you nine elected members, in this term succeeded spectacularly, making something good happen or stopping something bad?

COCKING: People power shut down the plans for a National Aboriginal Art Gallery at ANZAC Oval. People power pushed Council to undertake a comprehensive engagement on the Environmental Management Plans for Albrecht lights. People power will continue to influence how we make decisions as it should.

NEWS: Would you regard these issues as Big Council issues or small council ones?

COCKING: Future planning for the community and municipality is a requirement under the Local Government Act, however the roles in planning and how that intersects with the NTG leaves Council in a stakeholder to be consulted rather than engaged and partnered with. I’m supportive of Council growing its program base in the interests of the community. The Library and the Aquatic Centre are the most popular places in town serving our diverse community. Council is much more than roads, rates and rubbish.

NEWS: Did you come back from the USA inspired?

COCKING: In the United States, local governments can be the delivery agency for health, water, electricity and education. I want our Council to work more in partnership with Aboriginal organisations. I want to see council more engaged in the youth issues, empowering the young people of this town, supporting youth leadership not just in events. I want to work towards a sustainable town dealing with global heating in our own way.  Move to renewable energy,  increase safety from floods and ensure we’re prepared for heatwaves. Recycle water, food and organic waste, separate out plastics and work towards zero waste.

NEWS: Which matters should be discussed by council under the exclusion of the public?

NEWS: Are you considering running in the 2020 election?

COCKING: I am considering my options. A lot can happen in two years.