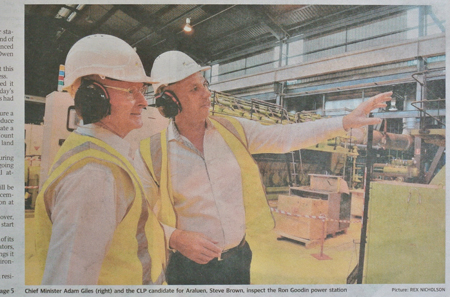 RePower Alice says the town was told by the Giles Government four years ago that the engines in the Ron Goodin power station had only a year to go.

Tim Brand, spokesman for the organisation which wants Alice to get 100% of its power from the sun by 2030, says the public was told by the CLP Government that the engines could not be maintained or upgraded, and would fail the town catastrophically very soon.

This has proved to be far from the truth, Mr Brand says.

Mr Giles, pictured above in the old power station with the unsuccessful candidate for Araluen, Steve Brown, made blackouts a major issue in lead-up to the 2016 election. (The photo appeared in the Centralian Advocate.)

The CLP spent $75m buying 10 gas powered generators for the Owen Springs power station instead of investing a significant part of that amount in more solar generation, as promoted by the town’s renewable energy lobbies.

Labor, then in Opposition, had little to say about this at the time, and has inherited what is clearly a mess.

Mr Brand says the old engines haven’t failed, as predicted: “Goodin is still working, is still used to power half the town.

“The surrounding residents in the upmarket Golfcourse Estate are still putting up with the noise, dust and smells.

“Somebody is talking bullshit.

“With elections ‘round the corner the Giles Government spent $75m without going to public tender or public consultation on 10 gas generators the community didn’t want and still don’t want.

“Contrary to spin in media releases, two of the 10 engines are still not commissioned, and the remainder are working only sporadically,” says Mr Brand. 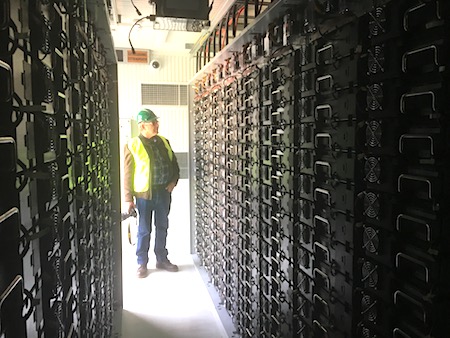 “What is their use to this town? They seem to obsolete before they have been started working.

“Furthermore, the battery (at right) at Ron Goodin, also opened with fanfare more than a year ago, is still not working.

“Power Water Corporation changed the contract and the rules for the use of the equipment.

“Did Territory Generation (TGen) get the technology wrong in the first place? It is now being asked to provide reactive power to the grid but it’s not doing it, under the revised conditions Power Water Corporation are imposing now.

“One problem with this is, it’s necessary for the grid to have the need for reactive power [providing power briefly during blackouts] to test the battery and that has not occurred, which was clearly never accounted for by the battery supplier or TGen at the time of signing the contracts.”

“As you will no doubt remember the BESS big battery in Alice Springs is required (according to PWC) to smooth out the fluctuations in solar production caused by small clouds,” says Mr Brand.

“Until this is commissioned the town is hamstrung by PWC and we are only allowed to have 25% of our power from solar, even if more is available.

“So instead of clouds being our biggest problem to electricity generation we are relying on a massive dirt, noisy, smelly, expensive gas generator at Ron Goodin.

“I wonder how this will reflect on your next electricity bill increases.”

The Alice Springs News is seeking comment from PWC and TGen.

Territory Generation is in the process of phasing out use of the Ron Goodin Power Station in Alice Springs, in the largest change to the local power generation system in 45 years.

The newly expanded Owen Springs Power Station together with the Battery Energy Storage Solution (BESS) will work together to provide reliability, efficiency and stability to the Alice Springs grid, as well as support renewable energy uptake.

The same process took place in Tennant Creek in 2018, where Territory Generation proved it could be successfully completed. The new generators at Tennant Creek have greatly improved efficiency and have contributed to a significant carbon reduction.

Territory Generation’s BESS has been online since March 2019 and has been exceeding operational expectations. The BESS is a leading-edge 5MW system and is one of the largest grid-connected storage solutions in Australia.

The BESS works by storing energy for use when production exceeds consumption and releasing this energy into the system. In this way, it complements the Owen Springs Power Station by helping to smooth the output and impact of solar power in the system when consumption peaks or when the solar generation is interrupted by cloud cover.

Territory Generation has worked closely with Power and Water Corporation System Control to ensure the risk to the electricity supply in Alice Springs is as low as possible during this cautious testing and introduction phase.

Power and Water System Control has an obligation to ensure the system security in Alice Springs and they make operational adjustments all the time in all the regulated grids in the Northern Territory to meet their obligations. These adjustments relate to all generators operating in the systems, not just Territory Generation, as well as to Power and Water Corporation networks division to optimise the reliability and security of the entire system.